Artistic and Executive Director Lisa Rubin unveils a powerful, 4-production season of theatre in addition to a wide variety of creative activities for all age groups at ‘The Segal’.

The Segal Centre for Performing Arts is launching their 2022-2023 Theatre season featuring four hot new shows that promise to take audiences through a full range of emotions. The company’s objective is also to support resurgence of the local theatre community by highlighting the very best that Montreal has to offer.

In a statement to The Montrealer, Lisa Rubin said; “The Segal is a proud artistic resource and hub for Montreal’s diverse theatre community of independent, emerging, and amateur artists from among Montreal’s many cultural communities. This year more than ever, the Segal is seeking to lift up companies that are rebuilding after the past few years, and help them grow and thrive.” 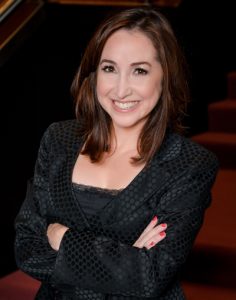 Just in time for Halloween, the Segal Centre will offer a spooky fall at the theatre with two new takes on well-known monster mashups. First off, Dracula: A Comedy of Terrors by Piaf/Dietrich director Gordon Greenberg and Steve Rosen is a hilarious send-up with a Mel Brooks-esque twist on the classic tale that will have audiences screaming with laughter.

Across the hall in the Segal Studio, Geordie Theatre, Kidoons, and WYRD Productions present Frankenstein created by Craig Francis, Rick Miller, and Paul Van Dyck, a living comic book for the whole family, in association with The 20K Collective and the Segal Centre as an add-to the subscription season.

In 2023, the rollercoaster of emotions continues with 3 of the most popular and acclaimed shows of the past few years. English by Sanaz Toossi is a play that resonates with bilinguals from everywhere. Taking place in an Iranian English classroom, it explores how language affects identity.

Prayer for the French Republic, 2022 Drama Desk winner for best play by Bad Jews writer Joshua Harmon, is a sweeping dramedy rife with his signature scorching dialogue; exploring how anti-Semitism affects a family across 5 generations, leaving them to question where they belong.

Closing the season is a Fringe Festival favourite making its mainstage debut at the Segal Centre, Josephine: A Musical Cabaret by Tymisha Harris, Michael Marinaccio, and Tod Kimbro. Harris stars in this dazzling retelling of the life of legendary singer/actress/activist/spy Josephine Baker directed by choreographer to the stars Sean Cheesman (choreographer of Prom Queen and April Fools).

“Each and every single one of the productions in the Segal Centre 2022-2023 theatre season is a must- see and there’s something for everyone. The shows are fresh, daring, sizzling, and features all the biggest names of today and tomorrow. This season is the perfect excuse to press pause on your binge-watch to reconnect with other people and share in the magic of live theatre,” says Artistic and Executive Director Lisa Rubin.

Here’s a deeper look at this fall’s productions.

As a special add-on to the subscription season in the fall, Montreal’s renowned theatre for young audiences, Geordie Theatre, Kidoons Inc., and WYRD Productions present the world premiere of Frankenstein, created by Craig Francis, Rick Miller and Paul Van Dyck in association with The 20K Collective and the Segal Centre in the Studio from October 19 to 30, 2022.

From the team that brought you BOOM and BOOM X, this electrifying new stage production blends immersive comic book design and playful theatrical techniques to reanimate the sci-fi classic for a new generation. This new family-friendly spin on the literary classic, Frankenstein confronts modern issues of climate change, artificial intelligence, and our relationship to technology… monsters of our own making!

When a young graphic novelist geek named Mary discovers the journal of Dr. Victor Frankenstein, she’s drawn into his uncanny story of secret experiments to conquer death. She discovers that we all need to face our own fears… before they face us!

Artistic Director Lisa Rubin excitedly states;   “We loved welcoming families and kids to the theatre with SuperDogs: The Musical so much, we just had to do it again! Who better to partner with than Montreal’s preeminent theatre for young audiences, Geordie Theatre. We hope you bring your Halloween costumes to the show!”

From the director of Piaf/Dietrich (fka The Angel and the Sparrow), Dracula: A Comedy of Terrors is a lightning fast, laugh-out-loud, irreverent farce that combines classic horror fiction with all-out silliness and satire. Five world-class actors nimbly tackle dozens of zany characters, in this exciting romp that is imaginatively staged and filled with magic and special effects. Dracula’s antics are guaranteed to raise your pulse as you emit blood-curdling screams — of laughter!

“Critic’s Pick! A rich new play!” – The New York Times. This play is a heartfelt and humorous look at what gets lost – and found – in translation. “English always!” That is the class rule as four Iranians assemble in a TOEFL (Test of English as a Foreign Language) classroom in Karaj, Iran. As the class slowly devolves into a linguistic mess, some students cling more tightly to their mother tongues while others chase the promise of new identities. The students play word games, translate Shakira songs, and endure major preposition confusion, and we are left with questions of how much it ultimately costs to fit in.

Lisa comments; “Language always seems to take centre stage in Montreal. This beautiful play is a reminder that language barriers aren’t as insurmountable as we think and that we can find understanding when we celebrate each other’s differences.” The New York Theatre Guide lauds English as “Among the best new plays of the season.”

This production is a new dark comedy from the writer of the smash hit Bad Jews! In this latest from multi-award-winning playwright Joshua Harmon, a Jewish couple in 1944 Paris face the aftermath of the Holocaust. More than 70 years later, their great-grandchildren find themselves facing the same question as their ancestors: “Are we safe?” Rife with Harmon’s signature biting dialogue and cutting wit, Prayer for the French Republic won the 2022 Drama Desk Award for Best Play and is a sweeping look at history, home, and the effects of an ancient hatred.

Lisa on why she chose this play; “Future generations will study Joshua Harmon’s works the way we do Mordecai Richler and Leonard Cohen for his white-hot commentary on contemporary Jewish lives. If you loved Bad Jews, this play is a must-see!”

What the critics say: “Ambitious and maddening, thought-provoking and schematic.’’ – The New York Times; “Such a richly dense and emotionally engaging drama.” – New York Theatre Guide

Before Ella, Tina, Billie, or Beyoncé – there was Josephine. Josephine Baker was the first African-American international superstar and one of the most remarkable figures of the 20th Century. In this multi-award-winning biographical musical that combines cabaret, theatre, burlesque, and dance, we follow Baker’s incredible exploits that were groundbreaking for her time and still incredible nearly a century later.

So You Think You Can Dance’s Sean Cheesman directs/choreographs and Tymisha Harris stars in this dazzling retelling of her revolutionary life as singer, movie star, WWII spy, civil rights activist, and so much more.

What the critics say: “Harris is a magnetic performer, strong singer, and high-powered dancer.” – San Diego Union Tribune; “★★★★★. Tymisha Harris’ performance is a tour de force. Josephine is a triumphant homage to a life worth remembering. Go see this one.” – CBC

Lisa’s Note:  “After years on the Fringe circuit winning over audiences and sweeping awards (including one from us!), we’re so thrilled to give it the Segal Centre sparkle and bring it to the mainstage for even more people to enjoy.”

An integral part of the Segal Centre mandate is to explore the many facets of Jewish identity through the arts, and the Segal has planned events featuring Jewish themes and talents from all walks of life, including J.A.M. (the Segal’s Jewish Arts Mentorship program), Kolot/Voices (a new series of workshops and masterclasses), CSUQ’s Festival Sefarad de Montreal, Alex Edelman’s hit Broadway comedy Just For Us, hosting two school productions from Herzliah and Akiva, and the acclaimed academy class, YAYA (Young Actors for Young Audiences). Resident community theatre company The Dora Wasserman Yiddish Theatre (DWYT) will continue their legacy with a series of events to be announced later and will bring back the popular Lyrics & Latkes: A Chanukah Sing-Along in time for the holidays.

Go Beyond the Stage

Providing a rich, engaging cultural experience for our community plays a vital role in the Segal Centre’s mission. To complement the productions on stage, the Segal will return to in-person Sunday @ The Segal events while also continuing to livestream the discussions for those unable to attend at the theatre. This illuminating pre-show lecture series takes place on the first preview Sunday of each of mainstage production and is an opportunity to explore the history, themes, and ideas behind each production. The beloved panel discussions will return in person as well as remain online to allow for more viewers to tune in and a greater diversity of guests. Monday Night Talkbacks also return on the regular evening performances of the mainstage productions.

Registration is open for another year of unique after-school courses for aspiring performers at the Segal’s Academy, the pinnacle of performing arts education for children in grades 2-11 in Montreal. Though space is limited and some classes are already full, there are many ways to get involved in the Segal Academy throughout the year: “Ped Day” programs, performing arts camps (Spring Break and Summer Camp), workshops, and a variety of special events.

In addition to its regular season programming, the Segal is a proud artistic resource and hub for Montreal’s diverse theatre community of independent, emerging, and amateur artists from among Montreal’s many cultural communities. This year more than ever, the Segal is seeking to lift up companies that are rebuilding after the past few years, and help them grow and thrive.

Segal patrons can look forward to guest theatre productions such as Persephone Production’s Pool (No Water), Theatre Ouest End’s The Covenant by Alice Abracen, Teesri Dunya’s Counter Offence, Opera McGill, an Indigenous art showcase and more. Please visit the website for information about all the activities at The Segal: www.segalcentre.org