Ringo Starr and His All Starr Band

Ringo affirmed “It is so great to finally announce all these shows we had planned for 2020, and I am really looking forward to playing them! I can’t wait to see all our fans and until then I’m sending everyone peace and love and see you soon!”

During these two years Starr has kept very busy and released two EPs, Zoom In and Change The World, as well as two books including the limited-edition retrospective hardcover book titled “RINGO ROCKS: 30 YEARS OF THE ALL STARRS 1989-2019,” and the newly announced limited-edition retrospective “LIFTED: FAB IMAGES AND MEMORIES OF MY LIFE WITH THE BEATLES FROM ACROSS THE UNIVERSE.” 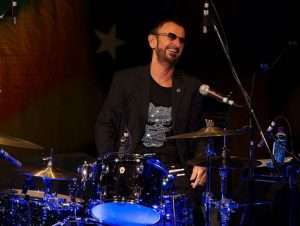 Throughout his career, Ringo Starr has received nine GRAMMY® Awards and has twice been inducted into the Rock and Roll Hall of Fame — first as a Beatle and then as solo artist. Between 1970 and 2020, Ringo has released 20 solo studio records and 2 EP’s in 2020 and 2021.  He has acted in over 15 films, received an Academy Award®. Ringo has published 8 books; had a stint as a male fashion model, and that same year went behind the lens as the photographer for some Foo Fighters PR photos. In 2018, Ringo was knighted and in 2019 he celebrated 30 years of touring with his All Starr Bands. For all his many creative successes, Ringo is and always will be first and foremost a musician, a drummer. Ringo’s candor, wit and soul are the lifeblood of his music. Peace and love are his life’s rhythm and melody, and he propels this universal message in everything he does: his evocative artwork, his enthusiastic live performances, his legendary songs, all imbued with the joy, reflection, and wisdom of the music icon the world knows and loves simply as “Ringo.”

To purchase your tickets visit: www.evenko.ca