The World Scholar’s Cup is a unique intellectual competition that is based on the concept of team co-operation that brings students from around the world to participate and compete. Conceived and run by Daniel Berdichevsky; The World Scholar’s Cup as proven to be a tremendous success, giving qualifying students an opportunity to meet and interact with youth from diverse cultures and countries around the globe.What they have in common is a passion for learning. “The participants compete and show themselves that they were better than they thought they were,” noted Berdichevsky in his opening remarks. The final competition takes place in an exotic world capitol. The 2016 event is scheduled for Bangkok, with a runner-up competition in Prague.

The World Scholar’s Cup worldwide competition hosts 50 regional events across six continents in 30 countries for approximately 15,000 students. Its goal is to motivate students from all backgrounds to discover new strengths and practice new skills in a competition designed to celebrate learning. The top team in Canada will go the World Scholar’s Cup, and there are opportunities for teams with a high threshold score to compete.

St. Georges School hosted the first Canadian competition on January 22 & 23 and the event was a terrific success. In addition to a large contingent from the host school, students from ECS and Selwyn House also competed. 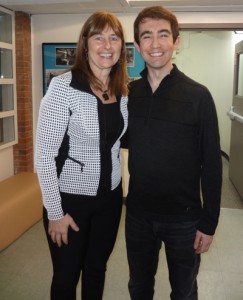 I attended the opening ceremony which was very much like a pep rally. Energy and enthusiasm overflowed the St. George’s auditorium after Head of School Sharon Klein opened the event, and then turned over the proceedings to Daniel Berdichevsky and his team. Daniel gave me a sample of the Scholar’s Challenge questionnaire, and it was a demanding task.

More than 50 students competed in events including Collaborative Writing, Scholar’s Challenge and Team Debate. During the Scholar’s Bowl, students gathered together in the St. George’s theatre where each team of three registered its responses to the quiz electronically, using a remote clicker.

“The excitement and genuine engagement of the students throughout the two days was truly inspiring,” said Sharon Klein, Head of School at St. George’s.

“The World Scholar’s Cup introduced a challenging academic exercise requiring superior critical and creative thinking, while drawing on a wealth of knowledge,” said Nathalie Bossé, St. George’s Assistant Head of Curriculum. “Despite being extremely demanding for all students, it provided whimsical and entertaining interludes embedded in the curriculum which allowed them to have fun as they worked together,” Bossé concluded.

Among the many individual and team medals earned in science, literature, social studies, history and the arts, one team from each division was named overall champion.