From a modest beginning growing up in Montreal’s Ville Emard district, Barry Lorenzetti has built BFL Canada into a $1.5 billion dollar insurance brokerage with twenty-one offices across Canada and international affiliations. He is an active philanthropist; supporting Mental Health initiatives, Women’s Hockey, and the Performing Arts.

“With Barry, it’s all about family.

He loves being surrounded by family,

and that includes employees and partners.”

I first met Barry when he took on the task of Executive Producer in a project to present Vittorio Rossi’s play The Chain at McGill’s Moyce Hall in the fall of 2019. Barry had committed to finance the re-mount of Vittorio’s critically acclaimed play about the Testa family. That meeting gave me an introduction to the size and scope of BFL Canada.

Barry Lorenzetti founded, nurtured and guided the company to become Canada’s largest independent insurance agency, based on a vision that he formulated from his previous experience as an employee in the insurance business. He had a clear vision of how to structure the company for success with what he terms as the “secret sauce” in the structure of the business. That ingredient is as valid today as it was when BFL Canada was founded thirty-three years ago in December 1987. The company has annual revenues of $1.5 billion, indicating that Barry’s unique concept has proven to be valid.

Early is his career in corporate insurance, Barry worked in London, England, where he established solid contacts in the corporate insurance industry. This familiarity with the senior executives in England would prove to be useful in his future. 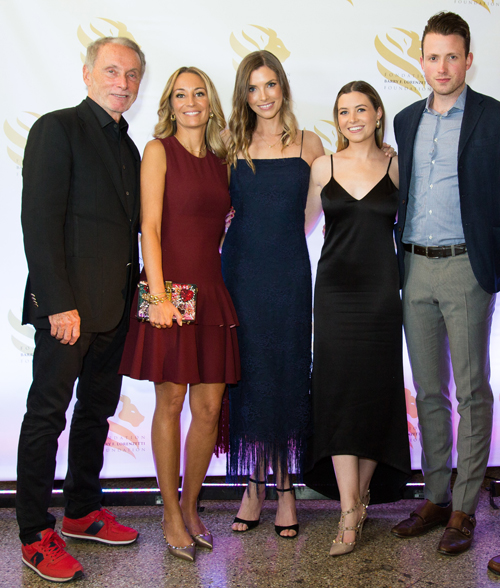 Barry with wife Carine Watier-Lorenzetti and his three kids Maggie, Jenna and Justin

Prior to establishing BFL Canada, Barry had established an impressive account list while working for a major Canadian subsidiary of an American company. He accepted a promotion to the Canadian head office in Toronto and placed his house on the market. In preparation for the move, his wife quit her job, and Barry assigned his accounts to colleagues. The US head office vetoed his promotion, even though the President of the Canadian company had confirmed Barry’s promotion and move. Barry found himself back in Montreal, and didn’t feel that he could take back his client list. Without the revenues to justify his executive income, Barry wasn’t surprised when his employment was terminated in July 1987 – although his premonition didn’t make it any easier to accept. “I had been with large companies, and at 32 or 33 years of age; I found that I was bored with the way business was conducted. I left all that and began the process of defining a new way of structuring an insurance brokerage business.” He vowed that he would never work for anyone again, and that he would control his own destiny.

Barry began a consultation process that included brainstorming with friends and mentors. Two key people were former colleagues Tom Sleeper and Joe Paré, both well-respected insurance professionals with excellent contacts. Both men possessed an entrepreneurial spirit, and agreed to come on board. “My dream was to create a work environment where everyone could pull together, for the benefit of the company. I believed that if I offered equity in the company, employees who accepted that proposal would become shareholders and have a greater commitment to what is now ‘their’ company.”

“I didn’t mind giving up shares, because to my thinking, I would own part of a larger company through the extra efforts of our employee/shareholders.”

Barry’s plan included the practice of selecting niche markets where his company could specialize by offering specialty insurance products, thereby establishing the company as a unique player in those niche markets. The next logical step would be to identify new markets.

Barry recognized that he needed a partner to finance the venture, and once again through contacts and friendships, he eventually found a partner in the London-based J. Besso & Company Ltd. After a lot of planning and a few disappointments prior to the Besso partnership, BFL Canada was launched on December 14, 1989. They signed their first client seventeen days later on December 31st. In today’s business vocabulary, BFL began to ‘disrupt’ the insurance business; and they continue to do so 33 years later. During the final negotiations with Besso, Barry requested a last minute addition to the contract that would give him and his partners the opportunity to buy back the shares owned by Besso, in the event of an ownership change in that company. It would prove to be a prescient move on Barry’s part.

“Barry is the coolest CEO out there.

A fine ‘disruptive’ example took place during a 1989 breakfast meeting Barry had with Ed Gathercole. Ed had developed a fledgling insurance business in the film and entertainment business. His employers were displeased that he was wasting too much time in a ‘silly’ business category. Barry saw another niche business opportunity and offered Ed a position with BFL, using the equity formula. Ed and four of his associates brought their business to BFL, and the entertainment niche is now the largest insurance practice in the Film and Entertainment business in Canada.

BFL continued to grow by attracting talented and entrepreneurial professionals. Before the company was ten years old, they landed the Hockey Canada account in 1996 in a hard-fought round of making competitive quotes. As a boy growing up in Ville Emard, Barry watched Hockey Night In Canada with his Dad, and he retained his passion for the game. In time Barry would serve as the Chairman of the Hockey Canada Foundation.

During our conversation and in his book about BFL Canada, Barry spoke of the important role that mentors played in helping him to plan and execute the growth of the company. “I believe that it’s important to surround yourself with talented people who will complement your strengths and weaknesses.” Stan Selinger was the company’s first corporate lawyer, and was instrumental in setting up BFL Canada. Another attorney, Arclen J Blakely assisted with a number of insurance files in the early days. Barry’s third mentor was Michael Barlow, who introduced Barry to Jean Warren and the subsequent BFL investment in the film and entertainment insurance business. All three men became Barry’s close personal friends; and he relied on them for their wise counsel as he planned the company’s growth.

“He inspires confidence in people, 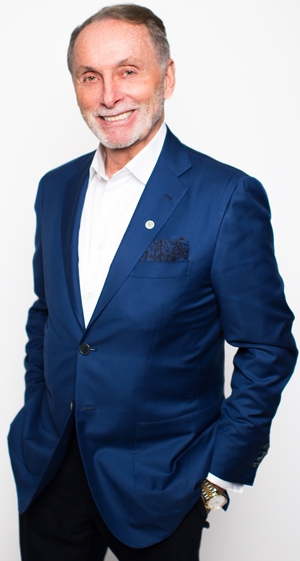 Barry has illustrated the value of teamwork when giving a course at a business school in The Beauce region. “I host a cocktail reception the day before my presentation, and I bring out my guitar and start to sing a song. What the students don’t know is that I’ve also brought my friend Denis Ducharme and a bass guitar player, and they’re hidden off stage. Partway through, I say that wouldn’t it be even better if we had a piano player – and out comes Denis. And of course the sound is much better! Then I suggest that Denis and I would be even better if we had a bass player – and out comes our bassist. The next morning, I’m able to draw upon this musical example to illustrate the value of teamwork, whether in music or business. Our three instruments combined to make a much better sound that I could produce by myself.”

The best compliment and recognition of Barry’s vision of how to structure an insurance brokerage came in June 2018 when the financial colossus Caisse de Dépôt et Placements du Québec purchased a 20% minority interest in BFL Canada. The Caisse employs some of the world’s best business analysts, and they liked everything about BFL Canada. Barry stated, “I have to admit that it was a terrific endorsement of our company vision and structure when the Caisse decided that they wanted to be part of our future; that we would be a solid investment for them and the citizens of Quebec. We are one of their highest returning investments on the Caisse portfolio.”

“We’ve had overtures from American companies, but I want BFL to remain a Canadian company, owned and operated by Canadians. We now have that assurance with the investment from the Caisse.”

Women in business and professional hockey

Through his long-standing association with the Hockey Canada Foundation, Barry and BFL Canada have made a five year $2.5 million commitment to be a founding partner in support of Women’s Hockey.  Along with co-sponsors The Montreal Canadiens and Sun Life, The Verdun Auditorium with will be the centre of women’s professional hockey activity. “Through my involvement in Hockey Canada and their support of international competitions for women, I got to know Caroline Ouellette and Coach Danielle Sauvageau. Support for women’s hockey is still sorely needed – and not just for the players. We need female coaches, referees and trainers. I can’t accept that Caroline Ouellette, who won four Olympic Gold Medals can’t make a living in women’s professional hockey. This program will provide access to ice time and an excellent training facility.”

Barry would like to see more women in business, and has funded the Barry F. Lorenzetti Women in Business Chair at the John Molson School of Business at Concordia University.

Through the Barry F. Lorenzetti, Barry contributes to Mental Health research and related initiatives, including PTSD treatments for Canadian Armed Forces Veterans. “When I was six or eight years old, my Uncle Arthur came to our house for supper once a week. He was usually poorly dressed and disheveled. I asked my Mom why he seemed to be different. She explained that he had been in WWII, and returned home with a condition called Shell Shock. Today we know that as Post Traumatic Stress Disorder, and there are now treatments and help available. That wasn’t the case for Uncle Arthur, and he eventually took his own life.”

Barry adds; “With the pandemic, we are seeing a rise in Mental Health issues – to the extent that it’s an additional mental health pandemic. We are getting more and more requests for assistance – and I’m concerned that the residual effects of mental illness will outlast the medical pandemic.”

Support for the Performing Arts

Barry’s involvement in the entertainment business through MAGJUSJEN Entertainment has expanded since our first meeting, and he continues to support the critically acclaimed work of Montreal playwright Vittorio Rossi. “We operate our entertainment company as a virtual business; without a building and without any government grants. Director Susan Fuda has done a terrific job with the stage and film productions. 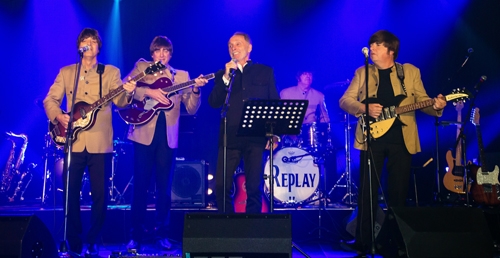 “During the pandemic, we were able to rent the theatre at the Leonardo Da Vinci Centre to film The Chain, which we produced at McGill in the fall of 2019. Vittorio and I grew up in Ville Emard, and we share that personal history. We’re planning a red carpet Grand Opening for The Chain on June 3 at a Guzzo Cinema in St. Leonard. The film will be screened at the TIFF Italian Film Festival in Toronto, and we’re excited that The Chain will be shown at during the Stratford Festival in Ontario this summer.”

In addition to being an immensely successful entrepreneur, Barry continues to play guitar and occasionally perform. “In high school I was in a band called The Carpetbaggers, and I loved to sing and play guitar. I’ve found it to be useful to be part of the entertainment for our fundraising galas. I’ve become friends with a Montreal group called Replay The Beatles, and I perform a few songs with them at our galas.”

“The diversity of these contributions to the community creates a tremendous balance in life – and it makes me feel full. I hope that my example will encourage other people to contribute as they are able.”