Tom Bountis is unquestionably a man with great vision. At the age of 23, he made it his personal mission to revolutionize the breakfast restaurant industry and opened on single location in Laval, He called it Allô! Mon Coco. Fifteen years later there are now 20 locations in Quebec and many more on the way in this province, not to mention Ontario and the United States.

Bountis recently marked the company`s 15th anniversary with a grand celebration at the new Plateau Mont-Royal locale on St. Laurent Boulevard. He has surrounded himself with strong personnel, recently handling the publicity and social media portfolio over to young dynamo Catherine Woron,

Known for their mouth-watering breakfasts, Allô! Mon Coco has quickly become the sought-after breakfast, lunch and at some franchise late afternoon/early supper spot for Quebecers. Serving unique plates with locally sourced ingredients, fresh fruit, and delicious potatoes and having generous portions, the brand continues to expand. 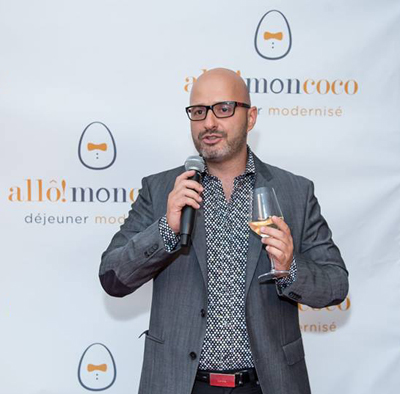 Bountis told me that he plans to open eight new locations in 2017 alone. “We have a waiting list of 30 people for franchises right now,” he says. “These people have all been loyal customers. They love the product so much they want to buy into it. Before we hand over a franchise, we make sure they are very well trained.”

Of the eight new spots to come, one will be in the old Stitches storefront in the plaza next to the former Blue Bonnets in the same section as P.F. Chang’s and Porto Vino and a few doors down from Baton Rouge and Marathon Souvlaki.

I can see that Bountis has the magic touch in terms of locales. Take the one on Côte des Neiges Road for instance, right across the street from the Jewish General Hospital. That storefront seemed to be a graveyard for any restaurant that went in there. Because I have friends who work in the area, I am very familiar with the options.  How could Allô! Mon Coco succeed; notably with the well-established Cora Restaurant just down the road. Open from 5:30 am to 5:30 pm, it has been jam packed every time I have been there for breakfast, lunch or a late afternoon snack. It has done so well that Cora had to close its doors.

The company credits menu diversity, fresh ingredients and modern spaces for their success in the industry. With over 200 breakfast and lunch options and an assortment of specialty coffees and refreshing drinks, the not so infrequent lineups are worth the wait.

My most recent lunch experience with my friend Glenn was a good one. He had to get to a 12:45 pm meeting, so asked that I meet him at Allô! Mon Coco an hour earlier. Our server Marie-Michelle handed us menus, brought me a cup of decaf coffee within 60 seconds, took our orders and had all of the food on the table in less than 10 minutes. We then leisurely enjoyed our choices – some toast, pancakes, bacon, eggs and sausage for me and a panini with beef and vegetable soup and later a piece of strawberry chocolate cake for Glenn. 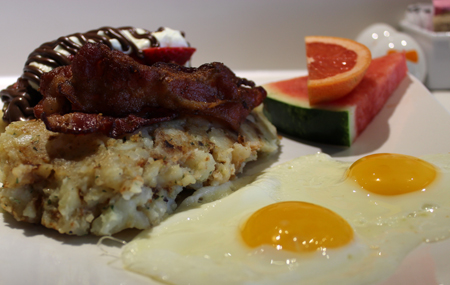 I must say there is nothing I like better than having a good breakfast for lunch or supper. For years I loved going to the former Picasso Restaurant on St. Jacques Street, where breakfast was served 24/7. It closed down more than a decade ago. Most Allô! Mon Coco franchises close in mid to late afternoon. Centropolis in Laval stays open until 6 pm while the one in Rosemere is open until 9 pm. I certainly hope some others consider giving us the breakfast/supper option. Bountis would not be surprised if the Plateau Montreal locale gives it a try.

Besides the many staple breakfast items,  there are salads and a host of lunch specials which include   a club sandwich, grilled chicken breast fillet, hamburgers, French fries and a steak and swiss cheese wrap to name a few.

Bountis is proud of the fact that chain has already created 500 jobs across the province. In addition to Côte des Neiges, Rosemere, Centropolis and the Plateau some of the other existing locations include Ste-Dorothée, Marché Central, Downtown Mon­treal, West Island, Place Vertu and Quartier Dix 30.

Log on to www.allomoncoco.com to see the menu and the variety of different locations and hours of operation.