One of the great things about Montreal, for those of us who enjoy a nice scenic drive, is our proximity to many great road-trip routes. The mountains of New England and New York are right next door, perfect for a long-weekend getaway.

But not much farther afield to the southwest are a treasure trove of many more miles of mountain splendour, in the Alleghenies of Pennsylvania and, beyond, the Blue Ridge Mountains of Virginia and North Carolina. The Blue Ridge’s northern tip in the northwest corner of Virginia is an easy day-and-a-half away, much of it through the spectacular mountain terrain of central Pennsylvania. 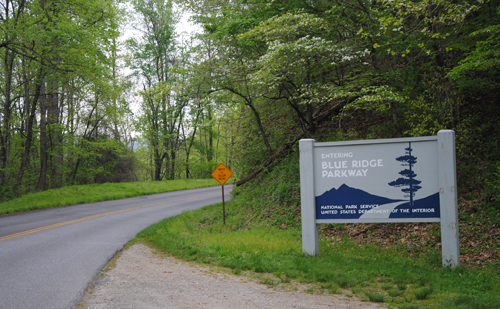 The southern entrance to the parkway

The drive along the Blue Ridge actually comprises two sections of scenic mountain parkways, beginning with Skyline Drive, a 170-kilometre run through Shenandoah National Park, and then on to the Blue Ridge Parkway, which continues southward for 760 kilometres through the Virginia mountains and into North Carolina, ending at Great Smoky Mountains National Park. The two-lane (two-way traffic) parkways for the most part follow the summit of the Blue Ridge Mountains, twisting and turning through forest and fields. There are scenic outlooks every few kilometres or so, offering spectacular views to the west over the Shenandoah Valley or to the east across the Piedmont, the rolling hills that cover much of the mid-Atlantic coastal states.

Both highways were built and are maintained by the U.S. National Parks Service. Construction began during the 1930s as public works projects under President Franklin D. Roosevelt’s New Deal, the economic-stimulation policy during the Great Depression. Most of Skyline Drive was completed prior to the Second World War, while the Blue Ridge Parkway was built in sections, and mostly completed by the mid-1960s. The final, engineering-challenged section – the Linn Cove Viaduct in North Carolina –opened in 1983. The parkways now attract more than 17 million visitors annually.

The route completely avoids civilization, with the exception of several lodges and occasional junctions with highways that traverse the Ridge, which go over or under the parkway via stone bridges. There are no stops signs or traffic lights on the entire 930-kilometre length of the two parkways. Commercial billboards are non-existent along the way, and the sparse highway signage is restricted to announcements of junctions and points of interest. The distance is marked by low stone mileposts, going from lowest mileage in the north to highest in the south. Highest elevation along the Blue Ridge Parkway is above 6,000 feet above sea level (at milepost 431 south of Mount Pisgah in North Carolina), with the lowest point roughly 600 feet at milepost 63 near the James River in southwest Virginia. Much of Skyline Drive is around the 3,000-foot mark. 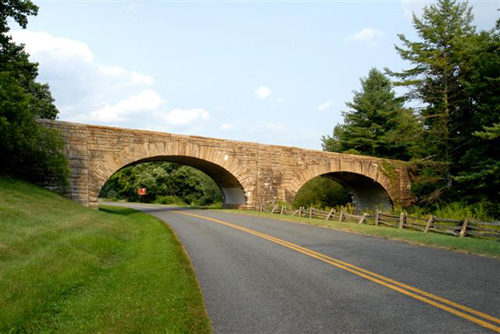 A low gap bridge constructed in the 1930s is still solid

Access to the Blue Ridge Parkway is free, while there is a $20 park-access fee when entering Skyline Drive. Note that while RVs and camper trailers are welcome on both parkways, some of the tunnels have low overhead clearances, in one case less than 13 feet.

Needless to say, few do the entire drive in a single go. (This writer covered the distance in three different trips over a five-year period.) The speed limit is 70 kilometres miles per hour (60 km/h on Skyline Drive) and is enforced by park rangers. While there occasionally are places to pass the slow-moving RVs and the like, making good time is not what this trip is all about. Nonetheless, these parkways are a driving enthusiast’s dream, and a tight-handling sports car, preferably a convertible, is the ultimate way to fully appreciate the route. Regardless of your ride, you will find it difficult to resist stopping at various outlooks to take in the compelling panoramas. The Blue Ridge Parkway alone boasts 382 overlooks, along with 26 tunnels and 176 bridges. 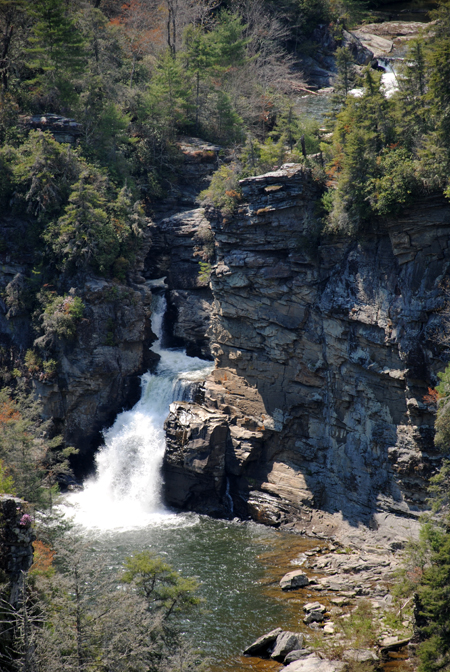 There is an array of flora and fauna along the way. Despite the high altitudes, most of the trees are deciduous and therefore provide spectacular fall foliage during the last three weeks of October. Wildlife is plentiful, and addition to deer it is not unusual to see the occasional bear from the roadway. The varied species include more than 2,000 plants, 225 birds and 60 mammals.

There are a number of cultural and geographic points of interest along the Blue Ridge Parkway, including Peaks of Otter, where a shuttle bus is available to ascend Sharp Top Mountain; Mabry Mill, which includes an early 20th-centrury gristmill, sawmill and blacksmith shop; the Blue Ridge Music Centre, offering a museum and concerts in an outdoor amphitheatre; the Northwest Trading Post, with handicrafts for sale; Linn Cove Viaduct, a 380-metre-long, curvy bridge that skirts Grandfather Mountain, protecting an ecologically sensitive area; and the Museum of North Carolina Minerals.

The Blue Ridge Parkway Visitor Centre in Asheville is well worth a stop, where you can take in a short documentary film on the building of the parkway, pick up some books and maps of the Parkway, and obtain specific information on Parkway points of interest.

A worthwhile side trip is the Biltmore Estate in Asheville, NC. Allow a full day to see this 250-room mansion, outbuildings and surrounding grounds, built by tycoon George Vanberbilt in 1895. This being Civil War country, there are several points of interest in the Shenandoah Valley, including the Virginia Military Institute in Lexington, VA, as well as the burial places of Confederate generals Robert Lee and Stonewall Jackson. And an hour east of the Blue Ridge is Appomattox Courthouse, where the Lee surrendered to Union General Ulysses Grant in 1865. 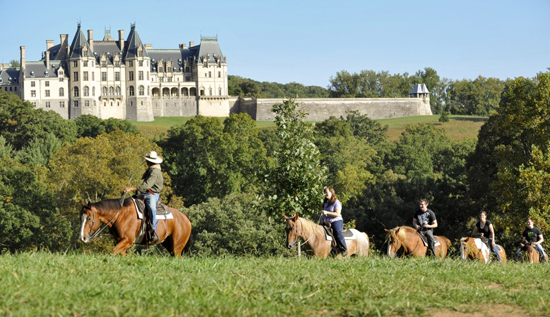 Allow a full day to the 250 room Biltmore Mansion

There are few services on the parkway itself. These include four mountain lodges (with dining facilities), as well as a handful of restaurants at other locations, all owned by the National Parks Service but concession-operated. From north to south, the lodging along Skyline Drive is found at Skyland, with three other restaurants along the way. The Blue Ridge Parkway has lodges at Peaks of Otter, Rocky Knob and Mount Pisgah, as well as two restaurants elsewhere. The lodges offer very comfortable (although somewhat rustic) rooms, and lovely dining rooms offering regional cuisine and a terrific view.

Lodging and restaurants off the parkways usually require a bit of a detour, but there are exceptions, such as the Switzerland Inn, a collection of alpine-chalet-style buildings just off the parkway at Little Switzerland, high above a valley near Marion, NC. Southern cooking meets Swiss cuisine, accompanied by yet another terrific view from the Blue Ridge.

Note that driving the parkways in winter can be risky business, with sectional closures common following snowfalls or when conditions are icy. However, travelling between April through November is mostly problem-free. Traffic can be on the heavy side when the dogwoods and rhododendrons bloom in May, during the summer months, and when the foliage colours are at peak in mid-to-late October. Lodges, restaurants and visitors’ centres are generally closed from mid-November to mid-April.

How to get there

Many parkway motorists drive sections of the parkways as part of a drive to or from Florida and other sunbelt destinations. From Montreal, the fastest route is Autoroute 20 and Highway 401 west to the Thousand Islands Bridge near Gananoque, ON, then south on Interstate 81 through New York and Pennsylvania. This route takes you through up and down the ridges and valleys of the Alleghenies, and then across tiny strips of Maryland and West Virginia before entering northwest Virginia at Winchester, a short distance from Front Royal, VA, via I-66 east and the entrance to Skyline Drive.

If you prefer to head farther south before getting up on the Blue Ridge Parkway, stay on I-81 south into the Shenandoah Valley, and choose one of the access points mentioned below.

Those who approach the Blue Ridge from the coast along I-95 past Philadelphia and Washington, DC, take I-66 west from Washington’s Capital Beltway to Front Royal and Skyline Drive’s northern entrance. Or stay on I-95 south to Richmond, VA, and then take I-64 west past Charlottesville to Waynesboro, VA, where you can access Skyline Drive (south entrance) or the Blue Ridge Parkway (north entrance).

Regardless of the purpose of your trip, it’s worth researching your options for getting on and off the road. An absolute must is to obtain the National Parks Service maps of Shenandoah National Park and the Blue Ridge Parkway. These are available online at www.nps.gov/planyourvisit/index.htm and www.nps.gov/blri/planyourvisit/upload/blrimap-2.pdf, respectively, but the beautifully printed hard copy versions of these detailed, large-scale maps are easier to peruse and more durable, and can be picked up at one of the several visitors’ centres along the way. 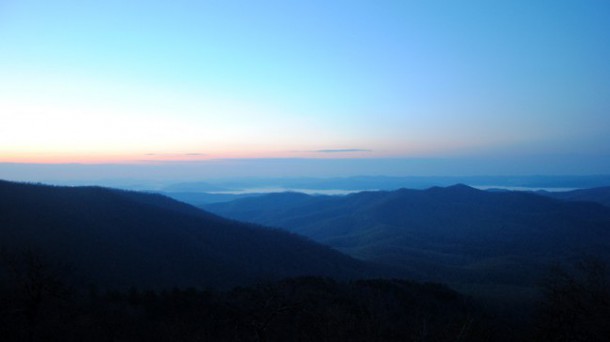 Note that there are only two highway junctions along Skyline Drive, and both are some distance from the nearest Interstate or other major highway. And while junctions are more numerous along the Blue Ridge Parkway, in many cases the routes up and down from the ridge can be long and arduous. Here are some of the more convenient entry and exit points for route panning and access to services.