Espace pour la vie is delighted to announce the birth of three lynx kittens at the Montreal Biodôme on May 1st. The kittens and their mother are doing well. Since the birth, the young lynxes have been very lively and their mother has been attentively seeing to their needs with nursing, cleaning and keeping them warm. It will not be possible to determine the kittens’ genders for a few weeks. From now until summer, a strict protocol will be followed to ensure that the newborns are left in peace and the mother can continue nurturing them. The little ones will be monitored by camera and will be kept quietly out of sight with their mother until they are weaned and ready to explore their surroundings safely. Visitors will get to see the lynx kittens in their habitat sometime this summer. Until then, you can follow their progress on Espace pour la vie’s social media platforms.

The female and male lynxes at the Biodôme are respectively 7 and 8 years old, and this is the second time they have reproduced, their first litter being in 2016. After repeated mating sessions in late February, the female was closely monitored by the animal care team. They suspected she was gestating when she started gaining weight and they noticed her abdomen getting rounder.

The female lynx arrived at the Biodôme in January 2015. After her mother was hit by a car near Chibougamau, the young one was found in poor condition: orphaned, injured, dying of hunger and infested with parasites. Thanks to the veterinarian and animal care provided at the Biodôme, her physical health was restored, and she had her first kittens in 2016. 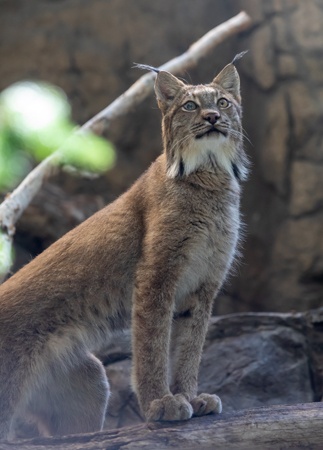 The male lynx was born at the Biodôme in 2013. His mother and father had been saved from a fur farm in 2006; they arrived with a number of physical (especially nutritional) and behavioural problems. Under the care of the Biodôme team, their health was gradually restored. Against all odds, they even managed to reproduce.

The Canada lynx can live for longer than 20 years in captivity. It can reach sexual maturity in the first year but typically will start breeding at age two. The gestation period is between 63 and 65 days. There can be up to eight kittens per litter, but the average is generally three to four.

The lynxes at the Biodôme have high genetic merit for zoological institutions. The Species Survival Plan (SSP) of the Association of Zoos and Aquariums (AZA) recommends encouraging reproduction to help grow the captive lynx population and boost their genetic diversity. The SSP program aims to maintain the genetic health of the population under human care. These lynxes could potentially represent an insurance plan for the wild population in the event that it suffers a major decline. The Biodôme has contributed nine lynx kitten births to the SSP program since 2012.

The species is not endangered in Canada, but there has been a decline in the number of individuals in some ranges, particularly in New Brunswick and Nova Scotia. The main threats are loss of habitat, fur trapping, fluctuations in prey populations and competition from other predators (e.g. coyotes).