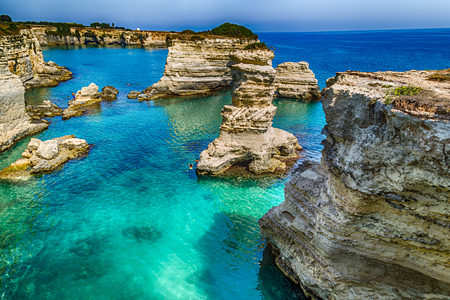 Swimmers enjoying the rocky stacks of Santo Andrea on the coast of Salento in Puglia
Photo: GoneWithTheWind/Shutterstock.com

“Brava, brava,” encourages Margherita, one of a group of women showing me how to roll orecchiette, an ear-shaped pasta typical on the Salento Peninsula of Italy. It’s the Festival of San Martino and I’m in the village of Taviano, a small town in the Puglia region of southern Italy. While strolling the cobblestones, I’ve been invited to help prepare food for the evening feast.

My impromptu cooking class is a warm welcome to this under-the-radar region of Italy. Although word is spreading about the sunny “heel” of Italy’s boot — Lecce has been called the “Florence of the South” — the peninsula is blessedly free of crowds and holds unique charms. 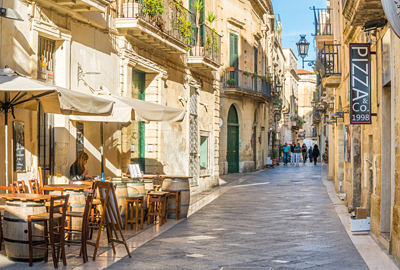 History of the Salento Peninsula

Situated between the Adriatic and Ionian seas at the southern tip of Italy’s Puglia region, Salento is comprised of the province of Lecce and the southern parts of the provinces of Brindisi and Taranto. It’s an area that’s been invaded, conquered and populated by waves of Greeks, Romans, Ottomans, Spanish and Normans. Each left their mark on its traditions, architecture and landscape.

Begin your explorations in Brindisi, a city on the peninsula’s northeastern coast that is now home to the modern Brindisi International Airport (BDS) but has served as a gateway to the region more than 2,000 years.  This Adriatic port was once the southern point of the Appian Way, the most strategically important Roman road serving as the military and economic artery for the Roman Empire.

Puglia’s name derives from the Latin phrase a pluvia, meaning ‘without rain’ and the peninsula’s dry landscape is dotted with ancient olive groves, underground olive oil presses carved into the soft limestone and historic towns brimming with Baroque architecture. 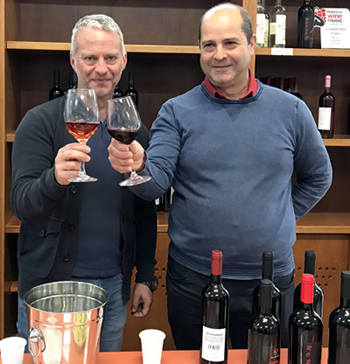 One of the best places to explore the region’s wines is in the town of Melissano, named after the Greek word Melissos in reference to its honey production. This legacy can be seen in the honey bee depicted within the town’s crest. More history can be seen within the Church of the Virgin of Rosary, home to several fine examples of cartapesta religious figures. 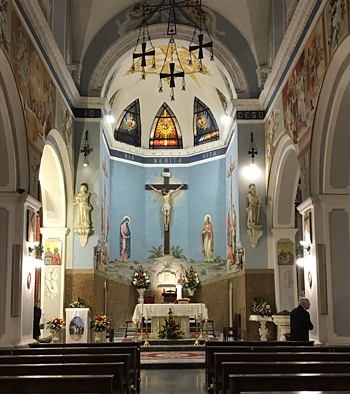 The Chiesa di San Martino di Tours in
Taviano is the hub for Festival of San Martino celebrations each November
Photo: Michele Peterson

“Many churches in Puglia didn’t have funds for marble so they created figures of finely crafted papier-mâché,” explains our guide Gianluca Tonti. “They could be created quickly and were also light enough to be carried in processions.”

Wine fans will be interested in the Unione Agricola di Melissano, a cooperative producing Negroamaro, ruby red wine with rich black fruit flavours, as well as the medium bodied Primitivo, one of the most iconic wines of the Salento. Sample these wines and authentic regional dishes such as pure di fave con cicorie (fava beans with chicory) at La Grottella on the outskirts of Melissano. This unique pizzeria and trattoria is home to one of more than 100 underground olive oil mills in the region. This ancient frantoi ipogei with its oil presses has been carefully restored. 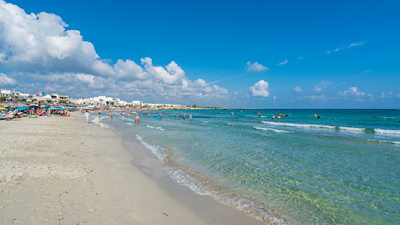 “Olive oil was a precious liquid asset and used for cooking, heating and lighting, ” says Tonti. “So these underground facilities protected the olives from the scorching heat and theft.”

In addition to a rich history evident from the she-wolf of Rome emblems on its fountains, ancient city gates and 600-year old stone walls, the nearby town of Racale has new allure.

“People are moving here, as it’s half the price of Tuscany and near beautiful beaches,” says a patron at an outdoor market where I marvel at the fresh produce, antipasti and local cheese.

This small, inland village brims with unassuming genuineness; its cobbled streets empty except for cascading flowers and palazzos waiting for a breath of new life. The surrounding countryside is dotted with wild flowers, cactus, ancient gnarled olive trees and even more frantoi ipogei in various states of restoration. 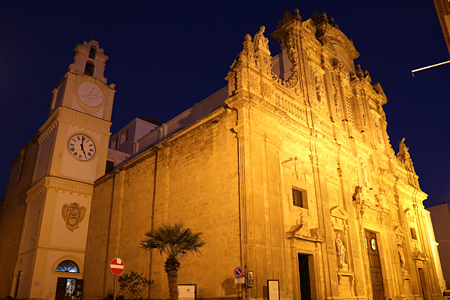 To the west of Racale lie soft golden sand beaches stretching northward to Gallipoli. Fringed by a national park filled with fragrant Aleppo pine, the windswept dunes and azure waters are assuredly some of Italy’s most scenic. While summers are busy with locals who flock to the seashore’s beaches, the shoulder seasons of spring and fall see few visitors. 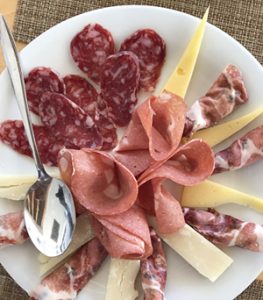 Regional cuisine is a highlight of a visit to the Salento Region of Puglia Italy
Photo: Michele Peterson

Situated on the west coast of the Salento Peninsula, facing the Ionian Sea, Gallipoli makes a fine base for explorations. Narrow streets, lined with graceful Baroque buildings in pale pink, yellow and white, lead to a seaside promenade, a sandy crescent of beach and a 13th century castle.

Further north is the town of Leverano, inland from the Gulf of Taranto coastline. Highlights here include the impressive Torre Federiciana dating to 1220. Time your visit for one of its celebrations of gastronomy and culture such as the Novello in Festa (New Wine Festival in November) or its summer Medieval Festival.

Celebrating Culture and Cuisine in Alliste-Felline, Matino and Taviano 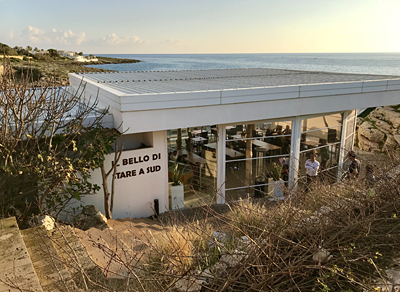 As you explore other inland towns, you’ll meet vendors in markets, chefs as well as artisanal producers, all willing to share their stories. The cucina povera tradition means the cuisine is simple and delicious, relying on fresh, local produce.

Begin with an exploration of extra-virgin olive oil production of ulivi secolari, centuries-old olive trees. For a tutored tasting, visit the Adamo farm in Alliste where they cultivate without the use of pesticides or fertilizers. The prized olives are harvested in early October and then crushed using a traditional mill, thus preserving the quality and fruity flavour of this superb olive oil.

Another must-visit is the pastoral Contadini farm in Felline where you can sample an award-winning line of products such as sun-dried tomatoes, marinated vegetables, and oils in a rainbow of colours. 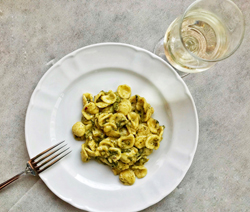 Wrap up your explorations in Matino, a charming village of winding streets, courtyards and stacked stone houses known as casa in corte, many of which have been converted into stylish B&Bs. Don’t miss dining at the atmospheric Trattoria Vinha’  located within a restored historic olive oil facility.

Seafood is also a must-try. An outside table at stylish Solatio restaurant near Torre Suda is a prime place to soak up the views while dining on sweet shrimp simply grilled with olive oil, lemon and sea salt. Also don’t miss Trattoria Octopus in Alliste where antipasti include polpette di polpo followed by catch of the day.

In Taviano, where I roll the pasta dough across a knife, invert it, place it on my finger to make a dome and then pinch it with pride, my instructors graciously don’t mention that in the time it took me to make one rather misshapen orecchiette, the nonna at the end of the table deftly filled an entire tray. 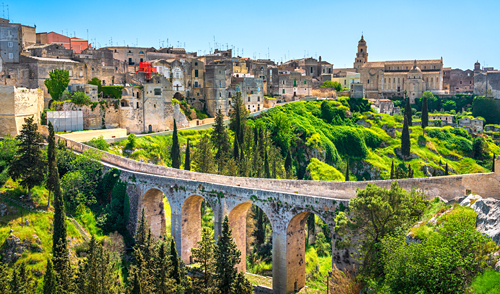 Getting There: Fly direct Montreal to Rome and then take a short connecting flight to Brindisi via Alitalia or travel by train in five hours.

Michele Peterson is an award-winning travel writer who specializes in food, drink and sun destinations. Her work has appeared in major magazines, guidebooks and travel anthologies. Get travel tips, discounts and recipes on her A Taste for Travel blog and via Twitter/Instagram @atastefortravel 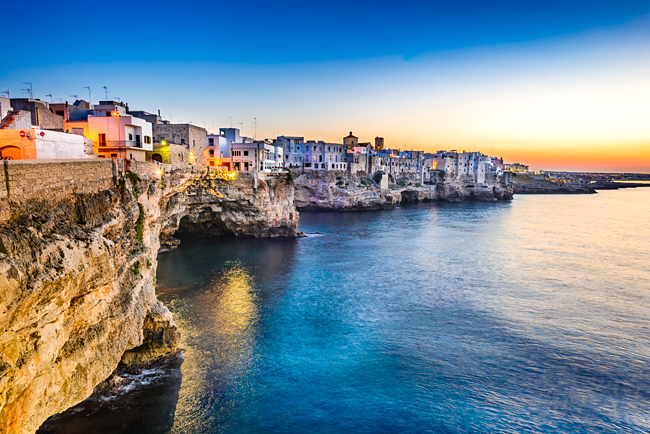 Puglia, Italy. Sunset scenery of Polignano a Mare, town in the province of Bari,
Apulia, southern Italia on the Adriatic Sea
Photo: Shutterstock.com