Désirée McGraw is a highly motivated individual and has an impressive resume for her work as a policy advisor to Paul Martin, Justin Trudeau, and a variety of not-for-profit organizations. She was Head of School for Pearson College (one of 18 United World Colleges) on Vancouver Island from 2015 to 2020. Named after Nobel Peace Prize winner Lester B. Pearson, the college hosts students of diverse backgrounds from every province and territory as well as 160 countries.

On returning to Montreal for family reasons in 2020, Désirée accepted the appointment by the De Gaspé Beaubien family to assume the role of President and CEO of Aqua Forum//Aqua Action and its flagship Aqua Hacking Challenge which has proven to be successful in tackling water issues and clean-up projects in Canada. 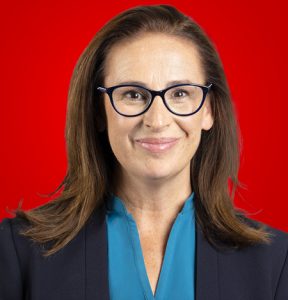 Prior to her work at Pearson, Désirée was President and Executive Director of The Jeanne Sauvé Foundation from 2008 – 2015. A committed environmentalist, she was a co-founder of Al Gore’s Climate Reality Project in Canada in 2007 – 2008.

With a wealth of knowledge in the not-for-profit sector, Désirée has been in demand as a Special Advisor to several Canadian foundations and also at Philanthropic Foundations Canada, the leading umbrella organization for private, family, and corporate foundations.

Her work and accomplishments have earned significant media recognition. In 2010 Désirée was named by the World Economic Forum as a Young Global Leader; and in 2014 The Financial Post recognized her as a Trailblazer and Trendsetter among Canada’s Top 100 Women.

It won’t be a surprise to readers that Désirée excelled in her university studies as a Commonwealth Scholar at the London school of Economics; augmented by Harvard University’s Kennedy School of Government, The Jackson School of International Affairs at Yale, and McGill’s Désautel School of Management.

With these credentials, it’s not surprising that the Liberal riding association approached Désirée when longtime MNA Kathleen Weil announced her retirement. In a recent conversation, Désirée stated; “We’re at a critical time in Quebec. I know what it means to be a Liberal. Words matter in our society and the divisive politics of the CAQ and Francois Legault are dangerous. I don’t subscribe to the myth that Anglophones are a privileged minority.”

“This is a big change for me, and we discussed my candidacy as a family. Firstly, I was used to working on a federal level. Secondly, my experience as a policy advisor and consultant was behind the scenes – away from the limelight. Running as a candidate would put me right out in front – and that was a scary thought! But I decided that at this juncture in Quebec, I needed to offer my voice, my experience and my enthusiasm for Montreal and our province.”

“We moved back to Montreal from B.C.at the height of the pandemic, and we came home to the disaster that was unfolding in Quebec. My first thought was ‘It doesn’t have to be this way.’ The CAQ had a terrible record of inaction at the beginning of the pandemic.”

“The politics are complicated but the principles are straightforward. We are a Federalist party. We believe in Rights and Freedoms. We aspire to represent all Quebecers. We in the Liberal Party believe that we can have a big conversation in a big tent.”

Désirée concludes our conversation; “I was born in the riding of NDG – Montreal West, have lived most of my life here and we are raising our family here. You can count on me to listen and to act as your MNA. I know that I have already made an impact in the party, that my voice and our voice as a community is being heard.”