Brain Canada and the Alzheimer Society of Canada are teaming up to host a free webinar focused on creating dementia-friendly spaces, taking place on Wednesday, September 28

In honour of World Alzheimer’s Month, Brain Canada and the Alzheimer Society of Canada are teaming up to host a free webinar focused on creating dementia-friendly spaces, taking place on Wednesday, September 28, 2022. This is part of a larger series offered by the two organizations called Dementia Talks! Canada, where researchers and people with lived experience from across the country come together to share their stories, the tips gained through experience of living with the disease and the latest research findings in the field of dementia.

One of the panellists who participated in the first online event – Growing the conversation on young onset dementia – was Mario Gregorio from Burnaby, B.C.  Just one year after retiring, at the age of 57, Mario was diagnosed with dementia caused by vascular cognitive impairment with a possible diagnosis of Alzheimer’s disease.

“After hearing the neurologist tell me that I had vascular dementia and possibly Alzheimer’s, my hopes and dreams of travelling crashed,” says Mario. “I had prepared and saved enough money for my future adventures, but now it was not to be.”

Mario is one of the approximately 600,000 people in Canada currently living with dementia, and this number is only expected to grow. By 2030, it is projected that 912,000 Canadians will be affected by the disease, costing the Canadian healthcare system an estimated $16.2B. Despite the prevalence of dementia in Canada, the disease remains under-recognized and stigmatized.

“It can be very isolating and overwhelming to live with a neurodegenerative disease or act as a caregiver,” explains Dr. Viviane Poupon, President and CEO of Brain Canada, who herself has had first-hand experience as a Parkinson’s caregiver for an aging parent.

“Fortunately, with a little help from my friends, I can still live well in my community,” he says. “I focus on my ability to do things as opposed to focusing on my inability to do everyday activities.” – Mario Gregorio

Since his diagnosis, Mario has become an advocate and leader as a member of the Alzheimer Society Advisory Group that created the Canadian Charter of Rights for People with Dementia (alzheimer.ca/charter). He is also a patient advocate, particularly for people living with early onset cognitive impairment.

“Because of the stigma often associated with the disease, there is a lot of misconception and fear about dementia,” he says. “I want to help others become aware that there is indeed life after diagnosis and dispel public misconceptions about the disease.” 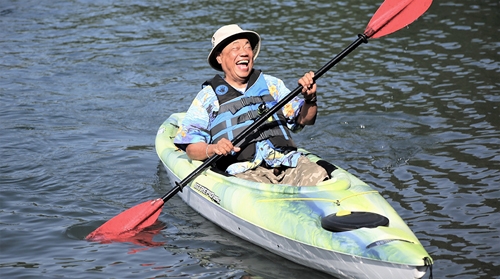 To keep busy, Mario volunteers at various fundraising events, helps seniors during weekly walks through Vancouver parks and acts as a student mentor at the University of British Columbia and Simon Fraser University.
Photo courtesy of Mario Gregorio

Dementia Talks! Canada is designed to spread awareness, offer support and create a sense of community for people affected by dementia, like Mario.

“The free webinar series provides a practical, reliable method to learn more about dementia in Canada through a collection of topic-focused conversations,” says Kaitlyn Jaggers, Research Lead of the Research Program at the Alzheimer Society of Canada.

“These discussions allow people with lived experience of Alzheimer’s disease and dementias to engage directly with research­ers working in the field,” adds Dr. Viviane Poupon. “We are proud to partner on initiatives like this that lead to advances for patients and their families.”

Initially, when Mario was diagnosed, his neurologist had given a prognosis of 7-12 years. Fourteen years later, Mario says he is still going strong.

“Fortunately, with a little help from my friends, I can still live well in my community,” he says. “I focus on my ability to do things as opposed to focusing on my inability to do everyday activities.”

“I think of my brain cells as twinkling stars. As my dementia progresses, there will be less and less of them. But I will still be here contributing to my community and enjoying myself.”

Attendees can register for the September 28 event at alzheimer.ca/talks

“I want to help others become aware that there is indeed life after diagnosis and dispel public misconceptions about the disease.” – Mario Gregorio

Dementia Talks! Canada has been made possible by the Canada Brain Research Fund (CBRF), an innovative arrangement between the Government of Canada (through Health Canada) and Brain Canada Foundation, and the Alzheimer Society of Canada.

The views expressed herein do not necessarily represent the views of the Minister of Health or the Government of Canada.