Lori Graham is a natural communicator, and she truly enjoys representing CTV at public functions and fundraisers in the community. From raising funds for disabled children to helping local theatre, Lori is generous with her time and effervescent personality.

“When I volunteered for The Drop Zone Challenge to raise money for The Quebec Society for Disabled Children; I didn’t fully appreciate what it was going to be like; to rappel down the side of a 21 storey building. I was dressed up as Cat Woman, and it’s a good thing I was wearing a mask – because I’m sure that my fear showed my face. I was scared to death! It really hit when I started to climb over the edge of the building – 21 floors up. Plus, I was broadcasting live as I went lowered myself down the side of the building. It was worth it, because our group raised over $115,000 for the children.”

While less physically challenging, Lori participated in the Ice Bucket Challenge in Greenfield Park this past summer, again live on air. “We did it during Movies In The Park in Greenfield Park, and that ice water sure is a jolt. The challenge did a lot to bring greater attention to ALS, as well as raise a lot of money.” Continuing, Lori states; “Public figures like us have a responsibility to lend our names to help charitable causes, and help publicize them.”

Lori and her colleagues at CTV initiated Celebrity Weather Presenter, inviting high-profile Montrealers to present the weather. “PK Subban was our first guest – and he’s a natural performer. We’ve also had Anthony Calvillo, Sugar Sammy, Chuck Hughes, Eugenie Bouchard and Mayor Denis Coderre, plus many of the Montreal’s radio morning men. Denis Coderre’s appearance evolved into a biweekly program titled Talk of The Town.” Perhaps forgetting her own celebrity status, Lori states; “These segments mean that I have fun meeting all these interesting Montrealers.” 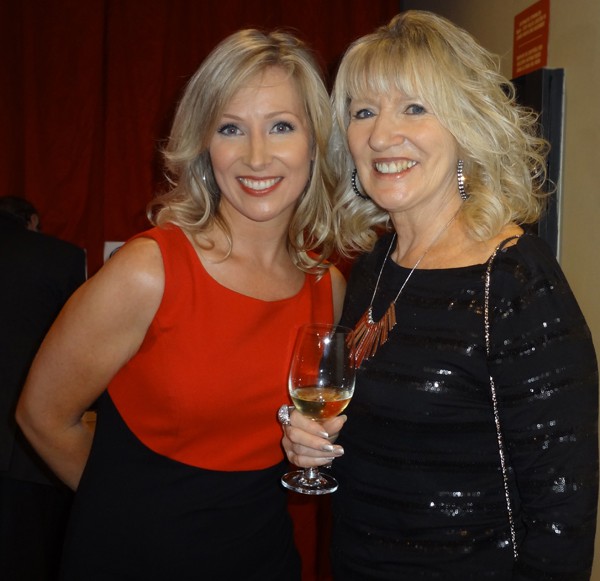 Lori with her mom Marilyn
at the annual Centaur Gala

In many ways Lori is the face if CTV Montreal.  While she makes it look easy,  from kibitzing with Celebrity Weather Presenter Sugar Sammy to raising funds at the Centaur Annual Gala, Lori has worked long and hard to earn a top on-air position at Montreal’s most popular television station.

Although Lori didn’t have career goal during her high school years, she excelled at public speaking and acting. “If there was a theatre production – I was there to audition!” She was elected to be the class valedictorian for her high school graduating class.

Lori’s family was (and continues to be) very supportive. “We had dinner together every night – and I still go ‘home’ for Sunday dinner. My dad always said to me: ‘You can be anything you want to be. You just have to go for it.’ Lori’s brother Jason has benefited from that same support. A highly successful computer analyst, he travels the world for Ericsson.

While attending John Abbott College, Laurie credits her English teacher Adrienne Elliott for encouraging her with her writing and to consider journalism. “It was she who really helped me to look seriously at journalism as a career.”

“I applied to Physiology at McGill and Broadcast Journalism at Concordia. Concordia only accepted 6 students a year into their Broadcast Journalism program – so I knew the competition would be stiff. The other students were bringing in portfolios of their previous work – but after studying physics and math – I didn’t have anything to put into a portfolio.” Lori took a risk in order to create a unique and special presentation to illustrate that she was an achievement-oriented person. “I lay down on some sheets of bristle board and had my Mom trace around me. I filled the cut-out of myself with all the awards I had won, including those for English and Public Speaking.” It was a gamble…

The first letter came from McGill, accepting Lori into their Physiology program. “I was happy – but not particularly excited. Then the letter from Concordia came – accepting me as one of the six successful applicants into Broadcast Journalism.” After Lori pealed herself off the ceiling her mother Marilyn commented; “Well – you always did have a gift for the gab!”

Lori was off to Concordia, with no journalism experience but with a desire to excel.

The second year courses had a focus on radio, and Lori found the immediacy of radio to be exhilarating. “The first time I did a live report by telephone back to the Concordia station – I thought; ‘This is terrific! I’ve never grown tired of being ‘live”; and being the weather presenter enables me to ‘go live’ every day that I’m on the air.”

Studying radio during her second year, Lori learned about the CJAD Al Cauley Award, which included an internship for the winner. “I sent in a demo tape – and I won!” During her internship, Lori did a live telephone report back to the station. “My mom and I were picking my Dad up at the train station, and I told her that it might be on. And then… “This is Claude Beaulieu from CJAD. We have a live report from Lori Graham about…” My mom and I went nuts – to hear my name being broadcast on a station that I had grown up listening to was a thrill.”

It got better – a lot better. 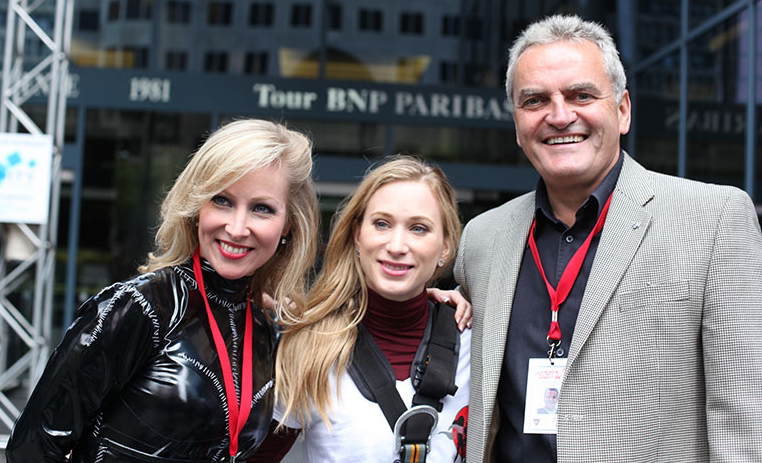 Lori Graham, Weather specialist for CTV Montreal,
Joannie Rochette, Canadian figure skater, and Jean Duchesneau, President for Quebec Society for Disabled Children – Lori and her fellow celebrities raised over $115,000 for the charity in one day

“One afternoon my brother said in kind of an offhand way, ‘Oh, by the way – you got a call from Gord Sinclair at CJAD’. When I called him he asked; ‘Hey kid – what do you know about traffic? I’d like you to come in and audition. I need a replacement for Cindy while she’s away…’

The traffic reporter works with both CJAD and the FM station, then called Mix 96. “I was soooo nervous. Here I was working with George Balcan on the biggest station in Montreal; and Terry Dimonte and Ted Bird on The Mix. I had grown up listening to these people, and now I’m on air with them. George Balcan totally put me at ease. He was such a gentleman, introducing me to the listeners.” Meanwhile, back in their West Island home, Ross and Marilyn Graham had two tape recorders ready to record each of Lori’s reports – one unit for CJAD and the other for Mix 96. Lori would replay and study where she could make improvements.

Gord Sinclair liked what he heard, and soon invited Lori to look after the overnight newscasts. “I arrived at 10 pm and my first broadcast was at 11:30 pm. The time flew by, because you had to write your newscasts from the information coming in and update it every half hour. I’d finish up at 8am, and then head over to Concordia for my first class at 10am.” This heavy workload continued for the remainder of Lori’s academic program. The student without an application portfolio graduated from one of Canada’s elite journalism schools with the highest marks in her class.

Lori was asked to audition as a possible weekend weather presenter for Global. As luck would have it, CTV station manager Barry Wilson was in the studio and saw Lori’s audition. “Who’s that?” he asked reporter Rob Lurie. “So – instead of working for Global, I was hired to do the weather on CTV Montreal during the weekends. When Don McGowan retired, they offered me the weather job on the 6 o’clock news.”

Lori was still doing the morning traffic at CJAD, arising at 4:30 am so that she’d be ready in the station for the first 6am traffic report, finishing her shift at noon. She then had to prepare for the 6pm CTV News broadcast. It was a long day… Fortunately, Barry Wilson made the decision for Lori, saying that CTV wanted her to focus on her television work.

The CTV Montreal news program has more than 200,000 viewers tuning in every evening. “You are CTV Montreal’s weather presenter 24/7 – no matter where you are. I grew up watching this show. It was part of our dinner hour every night. In my wildest dreams, I had no idea I would ever end up here.”

There’s a saying that ‘luck’ is when preparedness meets opportunity. My guess is that industry veterans like the late Gord Sinclair at CJAD, Barry Wilson at CTV and the CTV producers of Good Morning Canada recognize a talented and natural broadcaster – and that they saw those qualities in Lori Graham. Bravo!