Visiting the Most Famous Cathedral and Castle in South East England

Canterbury has drawn visitors for centuries. Long before the age of vacation travel, intrepid pilgrims from all walks of life made the arduous voyage here. Like the characters in Chaucer’s Canterbury Tales, I am traveling east from London to Canterbury. Unlike the travelers of Chaucer’s day, thankfully, my journey is a simple, comfortable hour and a half train ride. 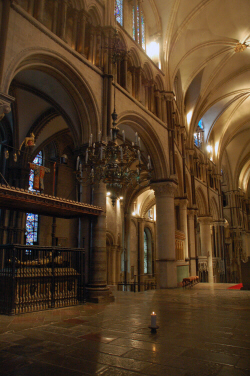 To reach Canterbury Cathedral, one must enter through Christ Church Gate. It is complete with angels, crests and a recent metal figure of Christ replacing the original that was destroyed in the mid 1600’s. Five or six stories high, this gate ushers you onto the Cathedral grounds. From this vantage point, the stone cathedral appears unobstructed for the first time.

Although, simultaneously massive and delicate, I pay only a moment’s notice to the exterior. I am eager to go inside and see the site that once rivalled Rome, Jerusalem and Santiago de Compostela as centers for Christian pilgrimage.

Beyond the dramatically soaring nave, just to the left of a stone screen separating the nave and the quire, is a small, surprisingly plain area called the Martyrdom. Even with a swarm of uniformed grade school children milling about a few things easily stand out. To one side is an old wooden door leading out to the cloister and on the other side a few, simple letters embedded into the floor: “THOMAS.”

On the wall above rests a modern sculpture featuring the jagged broken point of a sword. This is the site of Archbishop Thomas Becket’s murder. Intrigue, friendship, pride, murder, the tale of Thomas Becket has all the makings of a gripping novel, and at its core is a story about a struggle for power. For three and a half centuries after the murder, pilgrims brought gold, silver and gems to adorn the shrine of St. Thomas of Canterbury. Unfortunately, in the days when Henry VIII abolished the monasteries and named himself head of the Church of England, he also had Becket’s shrine destroyed.

In the Trinity Chapel, a raised level at the east end of the cathedral, a single candle marks the former site of St. Thomas` shrine. The heavily worn down stone steps on either side of the chapel are particularly poignant. They are not intended to draw your attention, but never-the-less they quietly testify to the throngs whose faith brought them here.

A Step Further Back in Time

Down another flight of stairs is the Romanesque crypt. While lacking the ornate columns and brilliant stained glass of the rest of the cathedral, I find this area somehow resonates more deeply with me. The oldest part of the cathedral is an austere forest of short pillars with a canopy of rounded arches. Built with strength, not elegance in mind, large stone blocks form the unadorned walls. Perhaps, it is the architecture and age of the crypt that fascinates me, or the lucky fact that, while the main cathedral was rebuilt and “improved” over time, this subterranean area retained its pristine simplicity. 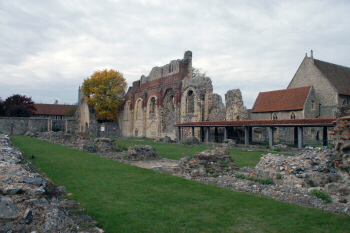 Beyond the cathedral precincts, small pedestrian-friendly streets with charming B&B’s and shops continue the Thomas Becket, Chaucer and pilgrim themes. Heading east on Burgate Street, I pass beyond the old city walls and make my way to the ruins of St. Augustine’s Abbey. As the wind begins to blow, I zip up my jacket and walk a little faster to the abbey museum entrance on Longport Street.

Once inside the museum, I pick up an audio guide and get a scarf from my backpack. Back outside I see the remains of St. Augustine’s Abbey. Across the green lawn, low grey mounds of stone rise above the grass. Here and there, a bright pink wild flower grows out of the ruins. Most of the smooth cut surface stones have disappeared, leaving only the interior rubble and cement visible. The abbey flourished from 598 until Henry VIII’s Dissolution of the Monasteries, but without the audio guide and information signs little of it remains recognizable. With the wind gusts getting colder and the sky threatening to rain, I head back to the city center.

To conclude my pilgrimage, I opt for a scenic dinner alongside the Stour River, in the Old Weaver’s Restaurant. After a good night’s rest and a more than ample English breakfast at the 16th century Tudor House B&B, I go to the train station and a half hour later arrive in Dover.

Atop the White Cliffs 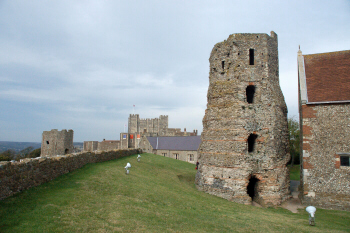 The city of Dover is nestled in a valley between the cliff top elevations of the Western Heights and the castle perched on the east cliff. Following some very useful advice, I take a taxi from the Dover Priory station up the steep incline to Dover Castle. Exploring the hilly castle grounds is a far better way to spend the extra time and energy saved arriving by taxi.

Before even entering the castle gate, I immediately see the castle`s monumental defensive superiority. The thick curtain walls and unrelenting towers aside, the landscape itself is a worthy deterrent. Attackers would first have to make their way up the precipitous hill. Then under a hail of arrows (or canons and gunfire, depending on the era) traverse sheer, deep ravines located next to the castle walls. 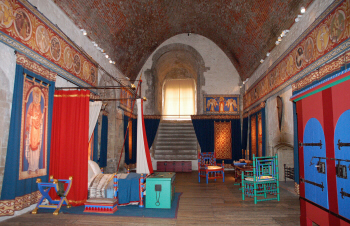 The King’s Chamber in Dover Castle as it might have appeared at the end of the
12th century Photo: Julie Kalan

All this just to breach the outer walls on the castle`s more vulnerable front!

Within another set of walls is the castle`s Great Tower. The tower was built by King Henry II needing a sufficiently impressive place to host European royalty and dignitaries traveling to Thomas Becket`s shrine in Canterbury.

The tower`s top two floors are a riot of primary coloured walls, tapestries and furniture. I was expecting to see either a pale, hollow hall and medieval armour display or a lavish, velvet ensconced 18th century stateroom so often found in castle tours. This brightly painted late 12th century recreation took me by surprise. From the rooftop, looking towards the English Channel, I can see the remains of a 2nd century Roman lighthouse on the uneven castle grounds.

Carved into the white chalky cliff, the secret wartime tunnels are a complex series of linked chambers. Originally dug to house soldiers barracks during the Napoleonic wars, the tunnels were expanded to accommodate military command posts during WWII. The tunnels vary in size, with some of them being surprisingly spacious.

The Dover Museum galleries feature numerous exhibits following the history of the city. My interest lies with the oldest exhibit. Found 19 feet (6m) below the city streets, the three and a half thousand-year-old boat now rests in an environmentally controlled case. The dim lighting, meant to aid with preservation, casts a mysterious quality to the boat. Far older than anything else I have seen in Kent, it is amazing to think that the blackened oak vessel before me, once plied the English Channel.