Frankie Valli has produced 71 hit recordings as a member of The Four Seasons and as a solo artist. These include 40 in the Top 40; 19 in the Top 10; and 8 Number #1 hits. His career with the Four Seasons stared in 1962, and sixty years later, he still enjoys singing and entertaining audiences. Frankie has absorbed some hard knocks along the way, including the tragic loss of two daughters, one to falling off a fires escape and another to a drug overdose. Frankie also endured a 10 year period of severe hearing loss before corrective surgery. During that time, he “sang from memory”. Throughout the good times and the not-so-good, Frankie kept singing, recording and performing.

When preparing to start touring again in 2021, an interviewer ask him; “Why do you keep doing working Frankie? You don’t need the money…” Frankie looked incredulously at the reporter, spread his arms and said; “I sing because it’s who I am – it’s what I do.”

The desire to be a successful singer started when Frankie was just seven. The Castelluccio family lived in the housing projects of Newark, New Jersey, where Frankie’s father worked as a barber. Frankie’s mother took him to The Paramount Theatre in New York City to see Frank Sinatra. Frankie recalls; “I saw Sinatra coming out on stage… the way he was lit up, it was like he had an aura around him. I decided then and there that I was going to be a successful singer.” 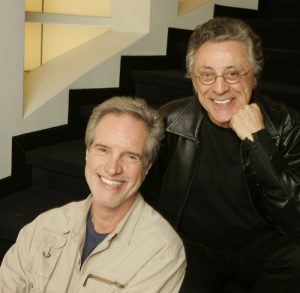 The public housing project where Frankie’s family lived was in a tough neighbourhood in Newark, New Jersey. The character of fellow band member Tony DeVito said in Jersey Boys; “From our neighbourhood, you got three ways out. You could join the army. You could get mobbed up. Or… you could become a star.” Frankie chose the third option. Having attended hair-dressing school, he had his ability to cut hair to fall back on if the entertainment business didn’t pan out.

Frankie Valli and the Four Seasons became an ‘overnight success’ in 1962 with the release of Sherry that featured his distinctive falsetto lead vocal, a departure from rhythm & blues vocal groups that had the falsetto in the background harmonies. In fact, Frankie had toiled with a variety of musicians and groups since cutting his first record in 1953, nearly a decade before Sherry.

In 1953, Frankie recorded My Mother’s Eyes, and while it was a local success, the record quickly faded into obscurity. In 1956, Frankie was in a group called The Four Lovers with Tommy and Nick DeVito and Hank Majewski. They recorded a song, made it to The Ed Sullivan show and again faded. By 1959, The Lovers were down to three members, when they were introduced to Bob Gaudio, who played piano and wrote songs. The group was also working with Bob Crewe, singing background for his solo artists. Finally, Bob Gaudio came up with a song that took advantage of Frankie’s incredible vocal range.

Gaudio and Crewe immediately wrote two more songs and The Four Seasons quickly followed up with two more #1 hits; Big Girls Don’t Cry and Walk Like A Man, solidifying their position in the competitive Top 40 music business. Their music had a strong New Jersey beat that still forms the driving sound of artists like Bruce Springsteen.

It was about this time that Bob Gaudio and Frankie Valli made a handshake agreement to split their earnings evenly; Gaudio from his song writing and producing, and Frankie from his recordings and performances.  To this day, that agreement is still in place.

Gaudio and Crewe turned into a song writing machine for The Four Seasons, and as they say on Top 40 radio – the hits just kept on coming; Dawn (Go Away), Ronnie, Rag Doll, Save It For Me, Big Man In Town, and Bye Bye Baby (Baby Goodbye).  The British Invasion during the 1960s knocked a lot of American artist off the charts – but not the Four Seasons. 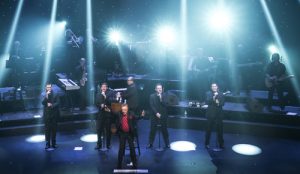 By 1967, the group added a new team of song writers and they recorded Let’s Hang On, Working My Way Back To You Babe and Opus 17 (Don’t You Worry ‘Bout Me).  A clever arrangement of Cole Porter’s Can’t Take My Eyes Off Of You rose to #1 on the Cashbox music chart.  Somehow the group and Frankie were able to simultaneously continue as the Four Seasons, and with Frankie pursuing a solo recording career.

The group’s momentum cooled in the early 70s and two members left. But Bob Gaudio and Frankie Valli didn’t stop writing. In 1975 they recorded My Eyes Adored You which shot up to #1. A new Four Seasons group was quickly formed and fronted by Frankie. Gaudio wrote two more songs, Who Loves You and December 1963 (Oh What A Night). Those songs went on to become two of the group’s biggest hits.

In 1978 Frankie’s solo career took off like a rocket when he answered a call from Barry Gibb of the Bee Gees who said, “I’ve written a song that’s going to be the title song for a movie and I think it would be perfect for you.  It’s called Grease,”  In an interview with Billboard Magazine Frankie noted; “That song was one of the biggest records I ever made in my career!”

Rubin Fogel will be presenting Frankie Valli and The Four Seasons at Salle Wilfrid Pelletier in Place des Arts on September 29 at 8pm. For tickets please visit: www.placedesarts.com  or call 514-842-2112.

• Where does that driving BOOM BOOM New Jersey beat come from? From the Four Seasons to Bruce Springsteen – it’s there! I defer to the great Bob Gaudio on the secrets to our sound. He wrote all of our songs with Bob Crewe, we are just grateful that a lot of them became hits! But there must be something in the water in New Jersey…look at all the great artists and great music made by the people who grew up there.

• Romancing The 60s! How did you feel singing those classics that could have been Four Seasons songs? “The ones that somehow got away.” Do you still include some of those songs in your current show?We definitely include some of the songs from this album in our performances. We sold 175 million records so nothing to complain about that we didn’t record these. There is so much great music out there and we really enjoy performing the ones we really love off this album.

• A Touch of Jazz. Sounds like you enjoyed the stripped-down production, you, the songs and a jazz quartet.  I always wanted to do a Jazz album, it was the first music I ever listened to and I have seen many of the jazz greats in concert growing up. My career led me to pop music but my first love was Jazz. The opportunity to work with a jazz great like Joey DeFrancesco was an unbelievable honor. I have always been a huge fan of jazz organ and he is the best in the world right now.

• There’s a sentence on your website that says if you didn’t make it in music – you could always go back to cutting hair. That’s a little-known fact that would interest our readers.I was a hairdresser in the lean years; it helped pay the bills when I was waiting for our big break! My parents didn’t have money, I came from nothing. I had to have something to fall back on.

• Frankie Valli performing at Grand Ole Opry. A Jersey Boy in the heart of country music! That must make you feel good to be welcomed into that venue.Absolutely! It is such an iconic place to perform and I am honored to be able to perform there.   Before I became successful I spent some time in a country band. And a phenomenal performer named Texas Jean Valley gave me my name and got me started in the record business.

• Six children – any of them involved in your business?My kids are all creative and creators. Even my grandkids! My son Brando is doing EDM and I just saw my granddaughter Olivia perform in the touring company of Pretty Woman in Los Angeles. She is playing the lead. It was thrilling!