The Montreal Museum of Fine Arts (MMFA) is thrilled to make the acquisition of a masterpiece of Abstract Expressionism by Elaine de Kooning (1918-1989), a seminal figure in this movement who was also an art professor and critic. This acquisition was made possible thanks to the profound generosity of philanthropist Roslyn Margles. Her monetary gift enabled the Museum to purchase Bill at St. Mark’s, one of De Kooning’s most important paintings. This exceptional artwork is the first piece by the artist to enter a Canadian public collection. It is now on display for the public in the MMFA’s Michal and Renata Hornstein Pavilion for Peace.

Says Nathalie Bondil, Director General and Chief Curator, MMFA, “From one woman to another, from one love to another, I can’t think of a more moving gesture. Thanks to our patron Roslyn Margles, we have the honour of exhibiting this striking tableau by Elaine de Kooning, a brilliant artist too often overshadowed by her husband.” 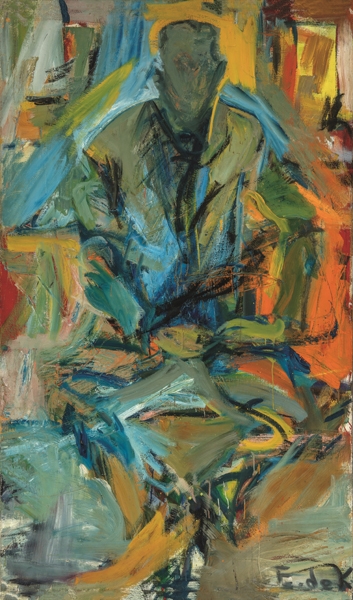 Extremely involved in the community and having a strong passion for the arts, Roslyn Margles made this tremendous philanthropic gesture in honour of her late husband, Max H. Margles, a great engineer who helped shape the face of our city.”Being aware of the value and impact of art on the lives of children and adults, its therapeutic value and its measure and reflection of civilization, I chose the MMFA to house this important work to be admired and studied by millions as a permanent memorial to my husband Max. I see Bill as a symbolic representation of Max and was quite moved emotionally by this painting. It is Elaine’s tribute to her husband and likewise, a tribute to my husband,” explained Margles.

Elaine de Kooning
The spouse of the famous Willem de Kooning, Elaine de Kooning was one of the few women of her generation to be respected as an artist in her own right. An extraordinary woman of her time, she overcame the gender-related obstacles she faced to become a defining figure of her generation. Together with Jackson Pollock, Robert Motherwell, Lee Krasner and Franz Kline, among others, De Kooning was featured in the groundbreaking Ninth Street Show (1951), widely considered to be the exhibition that launched the group of artists collectively referred to as the Abstract Expressionists, or the New York School. She once said: “It seemed like a good idea at the time, but later I came to think that it was a bit of a put-down of the women. There was something about the show that sort of attached women-wives to the real artists”. She signed her works with her initials to erase her gender.

De Kooning became known as a prolific art critic for the magazine Art News and taught at numerous universities throughout the United States as well as in Mexico and Paris. She was also a founding member of the Eighth Street Club in the East Village, New York, which served as an important meeting place for post-war avant-garde artists, musicians and writers. There, she established a reputation for her landscapes and portraits. Working at a time when figuration was shunned by a majority of New York’s avant-garde painters, who privileged gesture over representation, De Kooning crafted a style of abstract figuration that distinguished her from her contemporaries.

Bill at St. Mark’s
Elaine de Kooning maintained an open marriage with her spouse from 1943 to 1956, the year in which she created this oil on canvas. Acquired on the American art market, the portrait Bill at St. Mark’s was executed at a studio she occupied for a brief period of time on St. Mark’s Place in the East Village. It is one of four known paintings she made of her husband and was featured in major retrospectives.

“When I painted my seated men, I saw them as gyroscopes. Portraiture always fascinated me because I love the particular gesture of a particular expression or stance … Working on the figure, I wanted paint to sweep through as feelings sweep through,” wrote De Kooning.

In Bill at St. Mark’s, a seated male figure faces the viewer with his hands on his thighs and his legs open. Commanding the space with his monumental frontality and the aggressive openness of his posture, the sitter projects a strong virility that is amplified by the use of bold brushstrokes and rich colours – strong blues, mustard yellow, dark green, orange infused with red – that accent the contours of his body. His presence and persona are portrayed through pose, gesture and colour rather than through the features of his face, notably absent from this portrait. In fact, by eliminating the face, and thereby upending the conventions of traditional portraiture, De Kooning allowed for a certain kind of alchemy to transpire between observer and observed.

Elaine de Kooning is famous for her painting of John F. Kennedy. Her works have been exhibited and collected in major American museums, including New York City’s MoMA and Stable Gallery, the Walker Art Center in Minneapolis, the Institute of Contemporary Art in Boston and the Albright-Knox Art Gallery in Buffalo.

For information and tickets visit: www.mbam.qc.ca