What started out as a salad bar/café in the back half of a clothing boutique in 2004, has blossomed into a business with eight locations and over four hundred employees. It took four more years before Mandy and Rebecca Wolfe became an ‘overnight success’ when they opened a second location on Laurier Avenue in 2008. The sisters put in long days and even longer nights preparing their fresh salads, and baked goods for their customers. From the first day, Mandy’s chocolate chip cookies were a customer favourite and remain a menu staple.

What would ever possess two McGill graduates to take a chance on opening a restaurant. In a recent conversation, Mandy stated; “We were just young enough and with little to lose to give it a try. I was 25 and ‘Becca was 21. She had studied design at Parson’s in New York, and coffee shops and salad bars were at the height of their popularity. I had always loved to prepare salads and dressings, plus making my chocolate chip cookies. We decided that after eating a healthy meal that we should throw something in that was a little bit decadent – kind of like a reward. I started making chocolate chip cookies when I was 10 or 11, and we started with them as our first dessert item.” 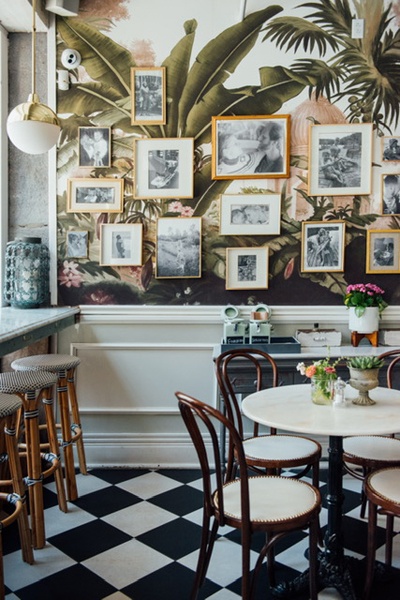 The décor of each restaurant is full of
family portraits, lots of bric-a-brac and
a homey vibe

Mandy initially studied oceanography at McGill and then made a radical switch from a science-based discipline to English Literature. After graduating, Mandy did a tour of Southeast Asia; teaching English as a Second Language. “I was a bit of a vegetarian and was attracted to the cuisine, the beaches, the kindness of the people and the fact that South East Asia was affordable.”

Brimming with excitement about the possibility of a restaurant based on salads, Rebecca convinced Mandy to join her in the venture. Rebecca’s husband Vince owned a clothing boutique called Mimi & Coco in Westmount’s tony Victoria Village. The budding entrepreneurs took on empty space at the back of the store, and opened Coco Café. Right from the beginning, they used local and organic ingredients whenever possible. Using her natural talent and design expertise gained at Parson’s; Rebecca designed the restaurant – a responsibility that she has continued throughout the ensuing years and the opening of new locations. The décor is comfy, bright and with an elegant beach house feel. The walls are packed with family photos, lots of bric-a-brac and of course – plants. Mandy comments; “We believe that ‘more is more’ and always good for our locations.”

At the beginning, the customers were mainly family and friends, and on some days not too many of them. “There were days when we’d make only five or six salads,” Mandy stated. “We were also fortunate to have a forgiving landlord with Rebecca’s husband.”

“We’re happiest when we’re making and creating. Some customers have favourite ingredients, and we’d prepare something for them. That’s how we came to create ‘Brian’s Salad’. Brian was an early regular customer to our design-your-own salad bar. Soon, his friends were asking for ‘Brian’s salad’. It grew in popularity and we started making more and more custom salads – we had recipes on pieces of paper everywhere. One day Brian brought in a Rolodex and said, ‘You might find this useful’.” To this day, Brian Etcovitch is still a MANDY’S customer.

Mandy and Rebecca persisted and survived those days when only a few customers came by. With a chuckle Mandy says; “It certainly helped that Vince was an understanding landlord! Without his patience and belief in our business, we may not have survived.”

Mimi & Coco opened a second location on trendy Laurier in 2008. The momentum of the growing business was confirmed when Mandy and Rebecca received a letter from the legal department of fashion and fragrance giant Chanel, owner of the Coco line of products. “In a way, it was flattering that we were noticed;” remarked Mandy – “but the reality was that we had to come up with a new name.”

Mandy and Rebecca, considered many options and suggestions, but Rebecca was firm in her belief that the business should be named after Mandy. Her thinking was that since all the recipes originated with Mandy, it was a logical extension to name the business after her older sister. Drawing upon her education in design at Parson’s, Rebecca continues to look after store designs and marketing. And so, to comply with the legal demand of the House of Chanel, MANDY’S became the name of the still-fledgling business. And then – it took off! 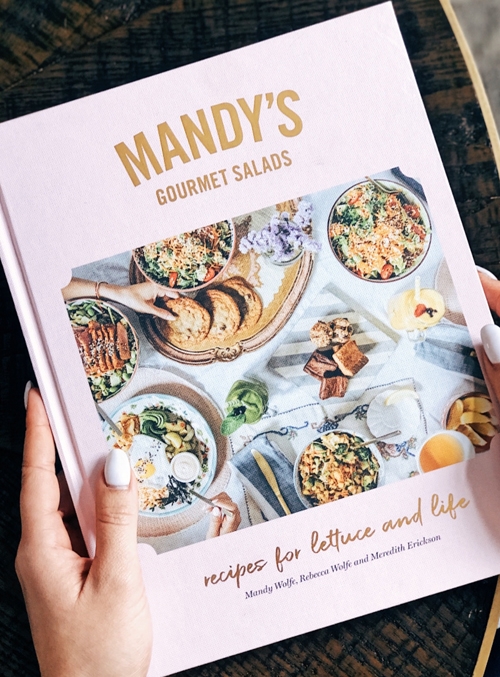 Right from the beginning, the sisters put in long days and even longer nights. “We understand that our customers are affluent, well-educated and have sophisticated tastes. Our products have to meet their high expectations – we get that. We also agree with them. To get the freshest produce, we had to be among the first to arrive at the markets so that we’d be ahead of other restaurant owners when the market opened at 7am. We had to get up at 6am to make the drive to the market. We’d do the cooking at home the night before – because we couldn’t have Vince’s fashionable clothing smelling like chicken or spices.”

The number of locations increased and the menu continued to expand. “During the past five years we have opened more and more restaurants. We came to realize that we would have to rely on our store managers. We added wine to our menus, and we had terrific help from Ryan Gray, a friend and one of the partners in the Nora Gray restaurant in the Sud-Ouest. He helped us immensely in choosing wines that would complement our healthy menu items.”

The initial success of Mandy and Rebecca was soon recognized by the BDC (Business Development Bank of Canada) and their Cisco’s Women Entrepreneurs’ Circle. The sisters enrolled in the Circle of Innovation program for the opening of their first stand-alone location on Montreal’s exclusive Crescent Street. In a previously published article, Mandy stated; “The Innovation Program came up in a casual conversation, and we immediately said ‘yes’ – let’s go.”

Mandy and Rebecca have learned a few hard lessons along the way. “Some of our toughest moments came from agreements we made with other people without having proper contracts in place… we don’t do that anymore! We also learned to delegate. One day I was pushing my baby carriage on my way to the courthouse to represent ourselves in some kind of legal action. I came across a lawyer friend who asked my why I was going to courthouse. He said, ‘Stop – you don’t have to do that. You have a business to run, you need to let other people help you.’ It was a revelation – he was right, and he’s now our lawyer.:”

“Rebecca and I were both pregnant at the same time, but with a strong staff we managed.”

The Wolfe family have always been close led by their late father Jason Wolfe. The Wolfe parents purchased a country home in The Laurentians in the 70s, and it’s still home base for the four Wolfe siblings and their families. In 2012, Mandy was 38 weeks pregnant with her first child when their dad died suddenly. “We were up in the country, and my Mom and Dad went out for a jog. The phone rang and it was my Mom asking for my husband – to tell him that our Dad had suffered a heart attack and died. It was a shock, a huge shock for all of us. I gave birth shortly after, and despite grieving for my father, having my first child gave me purpose and a sense of positivity in my life.” 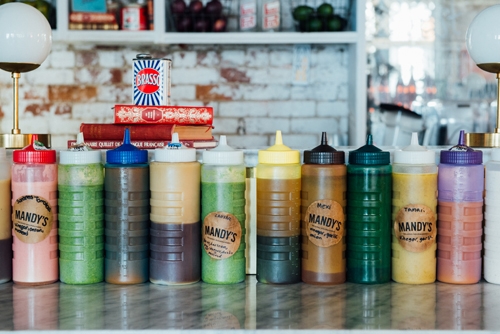 It all started with Mandy’s custom-made salad dressings, four of which are available in stores

With over 400 employees, the sisters understand how much they value their colleagues. “We hope that they have fun. We work at maintaining a positive and respectful work environment. We have company picnics, flag football games and barbeques.” As the company continued to grow, Rebecca and Mandy decided that it would be useful to have a written document of company values.

Like all businesses, the pandemic was an enormous challenge for MANDY’S. “Perhaps because we already had a well-developed pick-up business, we were able to adapt quickly to pick-up or delivery. We already had our own take-out packaging. So that was just more of the same. We had tried to set up a delivery service previously, and we already knew that didn’t work for us – so going to a delivery service like Uber Eats and Door Dash was a quick and easy decision. We already had a bottled product line of four MANDY’S Salad Dressings available on grocery stores – so that was also in place. Our biggest question was whether our staff would show up to work. However, they did come in… with some hesitation at first. That quickly changed to them being very happy to have someplace to go!”

MANDY’S continues to grow. On any given day, there is a line-up of cars double-parked in Crescent Street for pick-up orders. The same is true in Old Montreal and other locations. Following the best-seller status of the first cookbook, a second is being planned for the fall of 2022; that will feature more winter recipes for soups and salads. And look out Toronto! Mandy and Rebecca are excited about the October opening of their first Toronto location on Ossington in the trendy Queen Street West neighbourhood.

The success of MANDY’S is as much about the two entrepreneurs bringing family values and a genuine caring for their extended family of four hundred-plus employees.  The organic business formula that mirrors the personalities of Mandy and Rebecca Wolfe has proven to be a Montreal Success Story. 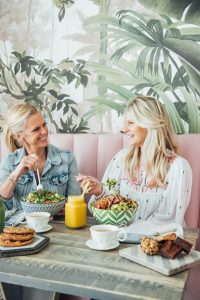 In November 2017, when approached by a Mandy’s roommate from her days at McGill to help newly arrived refugee families, Mandy and Rebecca quickly agreed. “At first our task was to provide winter clothing and basics to help thirty families to get started in their new life in Canada. We arrived at an apartment with some food staples and things from a list of items. The rooms were empty, no furniture other than a couple of folding chairs. I said, ‘Holy Moly – this is not enough. We’ve got to do better than this.’

“When you have more than you need,
you build a longer table – not a higher fence.”

“We started just before Christmas… it was winter and some of the refugees were wearing flip flops – that’s what they came with. Most of them were from different countries in Africa and their clothes simply weren’t enough for our climate.

“We used our restaurants and social media platforms to reach out to our customers and the wider public. We started with those first 30 families and ended up helping 200 families to get established in 200 apartments.”