Picture the quintessential Vermont country inn and you’ll imagine a large house in white clapboard with dormer windows and a verandah, the centrepiece of a picture-perfect village in the Green Mountains. Inside a fire will be cracking in the lobby hearth, to be enjoyed in comfy armchairs with a thick novel and a cup of tea, all overseen by a friendly innkeeper. 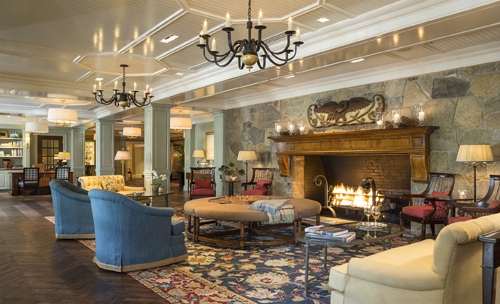 There’s a certain calmness and civility to it all, the perfect setting for a few days of peace and quiet, an escape from busy daily work and family life, or perhaps an enticing perk of retirement.

In most cases, this describes an inn of perhaps a few dozen rooms, and few amenities. This may be the perfect setting for a couple in need of a quiet retreat or a romantic interlude. For those who want that intimate atmosphere, but with more in the way of facilities – such as dining options, a spa and activities – there are somewhat larger properties that offer the classic Vermont inn experience. A prime example is Woodstock Inn, a 142-room masterpiece in Woodstock, Vermont, a village of 3,000 on the eastern slope of the Green Mountains, an easy three-hour drive down Interstate 89 from Montreal. 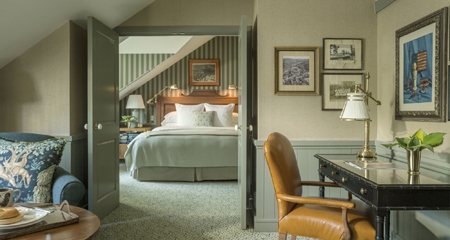 Laurance Rockefeller’s elegant suite is one of the
Legacy Suites

With a world-class spa, fitness centre, golf course and even its own alpine ski area, there’s plenty to do at Woodstock Inn – not to mention numerous off-site activities such as fly-fishing and falconry. It’s also a great base for hiking, alpine skiing at the giant Killington ski area, visiting maple-syrup farms, and scenic drives through the mountains and the Connecticut River Valley. Nonetheless, the highlight of a recent visit was settling into a comfy wingchair with a good book in front of the huge lobby fireplace, simply appreciating the warm atmosphere and friendly service. 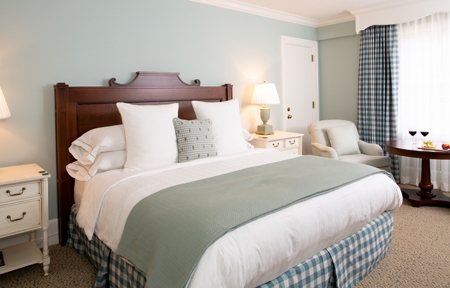 Standard rooms are comfortable and
well-appointed

The AAA Four Diamond resort has earned kudos from readers of Conde Nast, as the magazine’s surveys have rated it as one of New England’s top resorts. It is part of the LVX Collection of Preferred Hotels & Resorts, an affiliation of 650 independent hotels and resorts.

Accommodation is luxurious but cozy, from the “standard” Garden and Woodstock rooms to the large Collection rooms and signature Legacy suites. All rooms have beds of mahogany or cherrywood, with luxury linens and brass reading lamps, and include a sitting area. Suites have a separate parlour and are decorated with an eye to the area’s heritage. 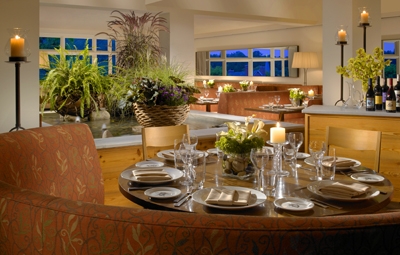 The Red Rooster is the main dining room, one of four dining options

What makes Woodstock Inn a particularly special destination, though, is its cuisine and spa. Farm-to-table dining, an increasingly popular culinary genre nowadays, is nowhere more refined. All of its five dining locations follow this style, notably the Red Rooster and the seasonally operated Red Barns at Kelly Way Gardens, specializing in unique and heirloom produce varieties according to specific harvests.

The Red Rooster is Woodstock Inn’s main dining venue. Among the seven main dishes offered on a recent menu was herb-roasted salmon with a cannelloni bean and corn stew, a medley of rock shrimp, mussels and smoked tomatoes. Other highlights were venison with garden squash and cranberry Carolina rice; and tomato braised short rib with braised leeks, green beans, eggplant and olive relish. The lunch menu had lighter fare but equally delightful. Particularly enjoyable was an apple squash bisque followed by poached pear rocket salad. Full breakfast is served in the Red Rooster. 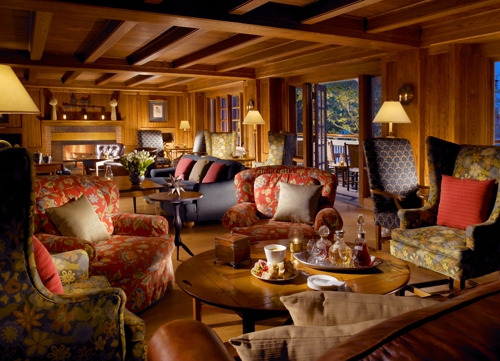 In a nod to the original 1763 inn, Richardson’s Tavern is warm and hospitable

At the opposite end of the lobby is Richardson’s Tavern, namesake of the original 18th-century establishment, that serves gastro-pub cuisine with a selection of local craft beers and spirits. Rounding out the main building’s food and beverage options is the Conservatory, which offers up coffee/tea and light breakfast fare in the morning and serves late afternoon tea. (Complimentary for guests.)

The Inn’s main bar, adjacent to the Red Rooster, is a lively spot that serves up a terrific range of signature cocktails. Of note is an Old Fashioned that combines a top-shelf bourbon with a local maple liqueur for a truly Vermont creation.

Woodstock Inn also operates several other dining venues on a seasonal basis: Perley’s Pourhouse at Suicide Six is open during the ski season offers local brews and a full menu, In the spring, summer and fall there’s the Fairway Grill at the golf course and the Red Barns. The latter has scheduled sittings in a dinner party setting that features, as described by the Inn’s literature, “the local artistry of the Vermont’s cheesemakers, farmers, beekeepers, and dairymen while celebrating the bounty of Kelly Way Gardens.” 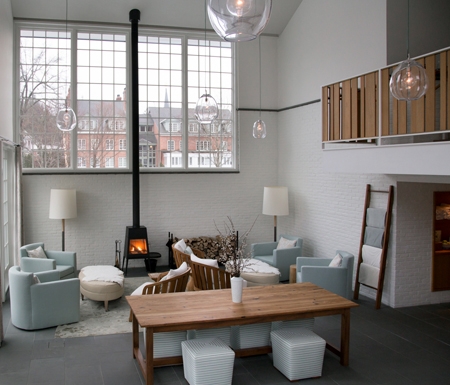 The Nordic Spa is always popular and includes
10 treatment rooms

Woodstock Inn’s spa has 10 treatment rooms with service ranging from regenerating body massages, facials and manicures/pedicures to alternative reflexology and reiki therapies. Staff use locally sourced products wherever possible. Most treatments can be enhanced by add-on treatments, including Himalayan salt stones, eco-fin moisturizing therapy and a wild lime scalp massage. The spa follows a sustainable, green philosophy that has earned it a it is LEED certification (Leadership in Energy and Environmental Design). The facility has earned a four-star spa rating from Forbes magazine.

Woodstock Inn has a colourful history, dating back to 1793 when Richardson’s Tavern opened its doors, catering to layers and staff of the county courthouse. The property eventually was enlarged and then replaced in 1892 by a new building named the Woodstock Inn. This iconic hotel, with a six-storey tower at its heart, was central Vermont’s major destination for 75 years. 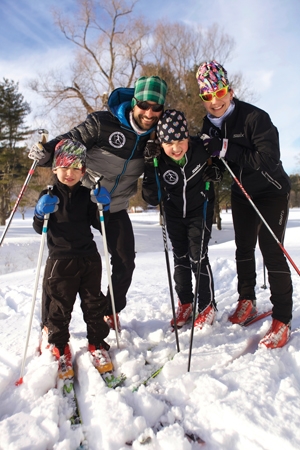 Laurance and Mary Rockefeller acquired the property in 1967 and decided to demolish the aging building two years later and create an inn that was modern and comfortable, yet traditional in appearance and atmosphere. This building has since been expanded and upgraded, the most recent renovations being done in 2016 including refurbishment and redecorating of all guest rooms and creation of a half dozen legacy suites.

The Rockefellers have long been connected to the village as part-time residents. The family home is now part of the Marsh-Billings-Rockefeller National Historical Park, a short walk from the Inn. Across the road from the mansion is the Billings Farm and Museum, which combines a fully operating dairy-cow operation with educational exhibits and interactive programs. It’s worth spending a few hours at the farm, touring the historic manager’s house, barns and paddocks that house Jersey cows, sheep, goats, oxen and workhorses. The farm as well as the Inn are owned and operated by The Woodstock Foundation, a non-profit organization founded by the Rockefellers in 1968. Admission to the farm is free for Inn guests.

Woodstock Inn has a number of winter booking packages aimed at both couples and families that include alpine and cross-country skiing, and other activities. One offers two nights’ accommodation including breakfast two days’ plus unlimited access to Suicide Six, the Nordic ski centre, snowshoeing and fat-tire snow biking. Another two-night arrangement provides families with accommodation and breakfast, downhill skiing, a ski lesson and an “apres-ski s’mores kit.” 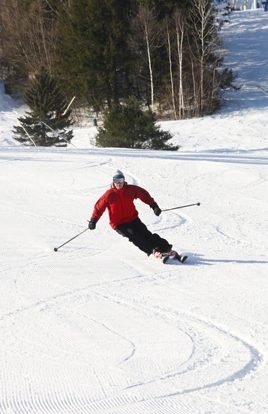 The Inn owns and operates its own ski hill, Suicide Six

While there’s plenty to do in the immediate vicinity of Woodstock Inn, including some classic small-town shopping in the village, there are a number of interesting nearby venues. New England Falconry partners with Woodstock Inn to provide guests an opportunity to experience interactive hands-on encounter with falcons. You can learn about this ancient past-time through an interpretive session as well as participating in free-flying sessions with these magnificent birds of prey.

At Quechee Gorge, a few kilometres to the east, you can take an easy walk with spectacular views of the Ottaquechee River hundreds of feet below. Sugarbush Farm is a working farm where you can sample Vermont cheeses and maple syrup. A half hour’s drive farther east is Hanover, New Hampshire, home of Dartmouth College. It’s fascinating place to visit if you fancy a stroll a classic Ivy League campus. And about a half hour to the west of Woodstock you’ll find some of New England’s most challenging and extensive downhill skiing at Killington Mountain and Pico Peak. 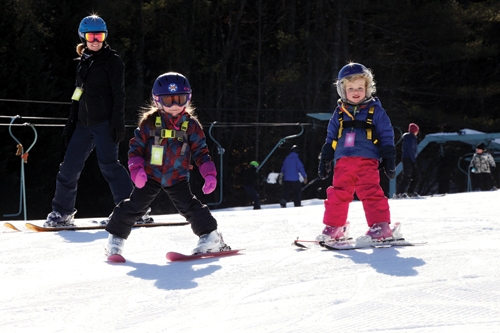 Winter fun for the whole family

Woodstock Inn is an inspired choice for a classic New England getaway for an active outdoors experience or simply to kick back and relax. You can even bring the dog – the Inn has a pets-allowed policy with a number of rooms available that are located near a dog-walking area.

The Woodstaock Inn has won numerous prestigious awards including AAA Four Diamond Award, I Prefer Members Choice Award Winner (among 650 luxury independent hotels and resorts) and is a member of the Historic Hotels of America. The Woodstock Inn is at: 14 The Green, Woodstock, Vermont. Telephone: 1-844-215-7111 or visit: www.woodstockinn.com Enjoy!