A lifetime commitment to higher education and student development

“I came here on a ten month contract thirty-five years ago and never left!” Such is Graham Carr’s deep-seated affection for the university that has captured his imagination and dedication since he first came to the History Department in 1983. In the last ten years he has played a key role in senior management and has been involved in the development of research facilities and the increasing the number of Concordia’s buildings.  He has served as Provost and Vice-President, Academic Affairs; Vice-President, Research and Graduate Studies; and Dean of Graduate Studies. His effectiveness in those roles was evidenced in December 2019 when the Board selected Graham to be Concordia’s President.

Outgoing Board Chair Norman Hébert Jr. stated; “Graham emerged from the international search process as the Board’s overwhelming top choice. His knowledge of the higher education landscape is extensive. His talent for getting things done in both strategic and operational roles is impressive. Graham comes from Concordia and is already beloved within our community. He brings that knowledge and those existing ties as well as his constant drive, imagination and curiosity to the position.”

Chancellor Jonathan Wener added: “Graham has played a major role in the university’s recent success — its strong enrolment numbers, research funding, and fundraising. He is responsible in no small part for Concordia’s ranking by QS World University Rankings as the top North American university under 50 for a second straight year.”

Graham begins our conversation; “I grew up in Sherbrooke in the Eastern Townships, and attended CEGEP at the nearby Champlain College in Lennoxville. I took my Master’s degree at Queen’s University in Kingston and then took a gap year to study at the University of Stockholm. That was a wonderful experience in a beautiful city.”  Graham then earned his PhD. in History at the University of Maine. “I stepped out of my doctoral studies into a ten month contract at here at Concordia. There’s been a lot of good fortune that has come my way in my 35+ years here at Concordia.” 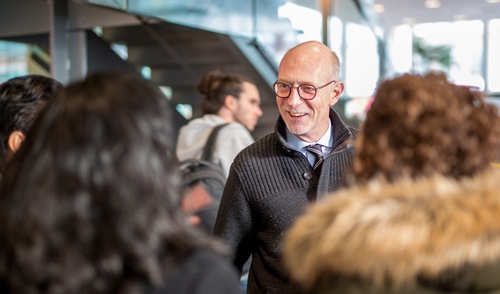 A classroom veteran and administrator, Graham Carr is happiest when he’s interacting with Concordia students and staff

Graham felt the Concordia ‘difference’ right away. “When I came to Concordia, the university was operating from 8am through to 10pm at night. This was an adjustment and an eye-opener for me; that the university was providing night school opportunities to thousands of people. I had a deep appreciation for the students who worked a full day and then came to night classes to continue their education and get a degree. They were dedicated and I learned a lot from them.”

Concordia is still a relatively young university – even by North American standards. “We’ve been ranked as the #1 university in operation in the under fifty year category in Canada and now North America. That’s a tremendous asset in attracting talented academics and students.” Combined with the university’s Next Generation market positioning, Concordia has earned a reputation as one of the world’s great Next-Gen universities. “This is our niche of excellence;” Graham states with pride. “When you think about it; that’s an evergreen idea. There will always be a next generation, and so there’s merit in appealing to that niche.”

“We have an interesting combination of academic fields of study. We have the largest Faculty of Fine Arts in Canada and it’s ranked at the top of its field.  In another discipline, we have an excellent engineering department and we’re leaders in computer science research. We have these two vastly different faculties in the same building and it’s proven to work.”

“We occupy a unique sector in society because each year we welcome 8,000 new students to our campus. We’ve learned that the requirements of students in 2020 are different and that their expectations are higher. In terms of our digital skills, we conducted a survey of students and learned that they didn’t believe that university met their expectations about digital capacity. We took that criticism seriously and have adapted so that we now meet student expectations.”

“We understand that for most students, their first experience with Concordia is through our web site; and we have elevated our level of sophistication in that regard.”

“Because we improved our digital capabilities, we were able to react quickly when COVID-19 hit. We flipped 6,000 classes from in-person classroom settings to completely online within one week. And with that enormous change in the way we teach, we still had the largest graduating class we’ve ever had!”

Concordia’s reputation has grown internationally, a topic Graham is enthusiastic about. “Students vote with their feet – there are many options available to them. While 75% of our students come from Quebec, we have international students coming from 150 countries. Our student population is incredibly diverse. Regardless of their country of origin, over 50% speak a language other than English or French at home. We also have the advantage that Montreal is ranked #1 in North America as a student destination.”

“Diversity is the secret sauce of innovation”

“Language has an effect on how you see the world around you. When you have students from diverse cultural backgrounds working on a project or assignment, they come up with some really creative and effective solutions.”

“We’re a solutions oriented institution – in all aspects of our operations.” When faced with controversial issues, the university established a procedure to examine the situation and make recommendations for a resolution and best practices moving forward. “Our process has become a prototype that has been adopted by other universities.”

With a downtown campus and another in Notre-Dame-de-Grace, Concordia is engaged in the nearby communities. The Oscar Peterson Concert Hall at the NDG campus is a popular venue for local concerts and fundraisers. The Loyola Chapel is home to the Lyric Theatre Singers Annual Christmas concert series. Similarly, the D.B. Clarke Theatre in the downtown campus is popular venue for theatre productions and guest lectures.

In addition to his many academic contacts, Graham’s activities in the wider community outside the university are extensive. He currently serves on the Board of Directors of Centraide (United Way) of Greater Montreal. He previously served on the Leadership Council for Digital Infrastructure, as President of the Canadian Federation for the Humanities and Social Sciences, as Chair of the Canada-US Fulbright selection committee, and on the National Capital Commission’s Advisory Committee for Communications, Marketing and Programming.

As our conversations draws to a conclusion, Graham states: We’re helping to create citizens who will make a contribution to their communities. Our job at Concordia is to help unleash that talent.”

Concordia University has undertaken a $250 million fundraising campaign that is off to a strong start. As the ‘face’ of the university; the person who occupies the position of President and Vice-Chancellor of Concordia is of key importance to the success of the campaign. The Board decided that Graham Carr is the person who will not only guide the operations of the university; but also that he can fill the role of the champion for the ongoing campaign.

“Our world is in the midst of its fourth industrial revolution.

To respond to our new reality — full of promise and risk —

Concordia is rethinking the role of universities.”