THE POLAROID PROJECT: AT THE INTERSECTION OF ART AND TECHNOLOGY
A CANADIAN EXCLUSIVE AT THE McCORD MUSEUM

The McCord Museum is currently hosting the Canadian exclusive premiere of The Polaroid Project: At the Intersection of Art and Technology, a large scale international exhibition organized by the Foundation for the Exhibition of Photography, New York/Lausanne, in collaboration with the MIT Museum in Cambridge, Massachusetts, and the WestLicht Museum for Photography in Vienna.

“The Polaroid Project: At the Intersection of Art and Technology is an extensive retrospective on the invention of the Polaroid, a photographic process that greatly inspired the creative approaches of photographers and artists in Montreal and internationally. The exhibition reveals the impact of the technology and includes a wealth of extremely creative works. This is a fantastic opportunity to highlight the importance of photography at the McCord Museum by incorporating bodies of work that showcase the contributions of Montreal artists,” says Hélène Samson, the curator of the McCord Museum’s Photography collection.

The Polaroid, both an image and a wonderful tool, remains associated in the collective imagination with innovation, efficiency and leisure. The Polaroid Project: At the Intersection of Art and Technology presents the original works of some 100 of the most celebrated international artists of the 20th century, including Andy Warhol, Robert Mapplethorpe, David Hockney, Chuck Close and Charles Eames, along with acclaimed Montreal artists like Evergon. The exhibition covers a wide variety of formats, ranging from the standard Polaroid (10.7 cm by 8.8 cm) to some very large sizes, including one assembly measuring 1.44 m by 2.99 m. A more technical part of the exhibition describes the development of various Polaroid cameras and accessories, highlighting the genius of their inventor, Edwin Land (1909–91), and the immediacy of the process that has inspired creators both here and elsewhere. The exhibition has been curated by William A. Ewing, Barbara P. Hitchcock, Rebekka Reuter, Gary Van Zante and Deborah G. Douglas.

A truly international phenomenon, the Polaroid has left its mark on Montreal’s photographic scene. To illustrate this slice of the city’s history, the McCord Museum will add photographs by three Montreal artists known for experimenting with Polaroid. Visitors will be able to admire the work of Louise Abbott, Benoît Aquin and Charles Gagnon.

Louise Abbott
Embracing all modes of expression associated with journalism, Louise Abbot has devoted most of her career to exploring the culture, heritage and natural environment of rural and Indigenous communities in Canada. She takes a particular interest in the social and environmental challenges these communities face. In 1979, when she attended the famous annual Rencontres d’Arles photography festival, she took part in Polaroid’s Artist Support Program. During its existence, the program welcomed some of the world’s great photographers, of which Ansel Adams was the first in a long series. Six of the Polaroids added to the exhibition are pictures Abbott took then, including a portrait of photojournalist Mary Ellen Mark.

Benoît Aquin
Well-known Montreal photographer Benoît Aquin exposes the devastating effects of human activity on the environment and has recently been focusing his photographic research on the consequences of totalitarian political regimes. He has created a number of photographic series, such as Tsunami (2004), Haiti (2010–11) and The China Dust Bowl (2006–07), for which he won the prestigious Prix Pictet award in 2008. The exhibition includes a series of photographs exploring the world of sex workers in Montreal—pictures to which the women added their own input through writing.

Charles Gagnon
A designer by training and a major abstract painter, Charles Gagnon has devoted his career to an approach that explores the conceptual and plastic dimensions of photography and painting. From 1976 to 1978, he intensively delved into the creative possibilities inherent in Polaroid technology. On a daily basis over those three years, he used the medium as a means of studying forms and lines. The exhibition showcases one of his many series dedicated to formalist research. Gagnon’s photographic practice is yet another demonstration of the rich creative potential of Montreal artists.

In keeping with its role as Montreal’s museum of social history, the McCord Museum has since April been encouraging Montrealers to contribute to the “Polaroid Project” by donating their photos to the participatory, evolving work of art displayed in the last exhibition room. In addition to this open invitation and to pursue its education and community engagement mission, the Museum has asked 11 community organizations1 to join in the project. As part of the Conseil des Arts de Montréal’s démART-Mtl program, multidisciplinary artist Narcisse E. Esfahani has given over 20 workshops on Polaroid photography at these organizations and will be extending this outreach activity to children attending the McCord Museum’s annual day camp. So far, 193 participants have experimented with Polaroid and added close to 200 photos to the exhibition’s collective work of art. 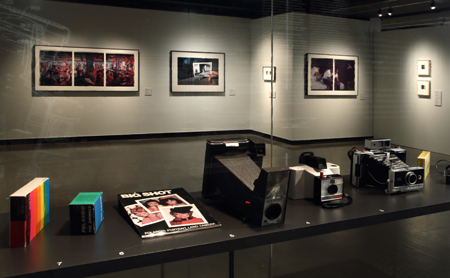 Already well under way, the participatory project that will evolve throughout the exhibition’s run will bring together both period photos illustrating the golden age of Polaroid technology and present-day pictures. Through the eyes of Montrealers of all ages and all backgrounds, presenting a wide range of perspectives on the city, visitors will be able to appreciate how Polaroid has changed since it came onto the market in 1948.

To allow as many people as possible to contribute to the project, the McCord Museum visitors will be able to borrow a Polaroid camera for free from the Museum Boutique. Travellers staying at the prestigious Le Mount Stephen Hotel, as well as attendees of the Fashion & Design Festival (August 19 to 24, 2019), both of whom are exhibition partners, will also be able to participate. Last, the Museum invites its Photo Members to take part in photo walks each month, starting in July, to help immortalize Montreal. Those who wish will be able to take Polaroid shots and add them to the participatory work of art. Activities are organized for Photo Members all year long, including training sessions and talks given by photography professionals. To find out more, go to the Become a Member page.

Amplify Montreal, in partnership with Dans la rue
Besides the démART-Mtl program of the Conseil des Arts de Montréal, the McCord Museum’s Education, Community Engagement and Cultural Programs department has invited young people involved with the organization Dans la rue to take part in a series of workshops on the history of photography, as well as to continue to pursue their exploration of photography by joining in a walk through the streets of Ville Marie. The young people’s photos of this seminal Montreal district are now on show in Amplify Montreal.

Ville Marie, in downtown Montreal, is one of the city’s most vibrant, cosmopolitan neighbourhoods. Through young people’s eyes, the city’s buildings are revealed in the way they relate to one another: churches, skyscrapers, shopping centres, small cafés and imposing hotels rub shoulders in the urban space.

Amplify Montreal pays tribute to the engagement of its participants, and to their creativity and talent. It is being presented alongside The Polaroid Project: At the Intersection of Art and Technology on Level 1 of the McCord Museum from mid-June until September 15.

Exhibition-related activities
Every Wednesday in July, as part of the Urban Forest, Exeko is inviting Montrealers to a Happy Hour Pop-Up that will feature discussions and exchanges around the Museum’s photography collection. On September 12, an After Hours at the McCord evening will be devoted to the theme of Polaroid photography. Last, the Museum will be giving visitors the chance to experience a “Polaroid Weekend” by entering the exhibition contest. The winner of the grand prize will get a night for two at the Mount Stephen Hotel, a Polaroid OneStep 2 camera (Stranger Things limited edition) with instant film provided by Royal Photo, as well as a pair of Polaroid sunglasses offered by Polaroid Eyewear. There will also be three second prizes consisting of a Polaroid OneStep 2 camera (Stranger
Things limited edition) and a pair of Polaroid sunglasses.