At first glance, it’s hard to imagine the sleepy town of Vankleek Hill, Ontario so peaceful and picturesque, could be such a bustling place with year-round activities drawing people from miles around. This thriving community located on Highway 34 between Alexandria and Hawkesbury, is only minutes from Highway 417 and an hour’s drive to both Montreal and Ottawa. Vankleek Hill offers so much more than meets the eye.

Those who consider themselves fortunate enough to live here, declare they have found a winning balance between the busy and the quiet. There are many opportunities to get involved in the community, one that has aged most gracefully in historic elegance, with its well-known claim to fame as “Gingerbread Capital of Ontario”.

Many organizations are supported by a strong volunteer base and a spirit and passion here, providing activities for seniors, recreation, sports, arts, culture and much more. According to Louise Sproule, the owner and publisher of The Review for the last 20 years, (the local newspaper founded in 1893), “in the last decade or so, we have welcomed many new young families to the area who seek ties to their community and ways to enjoy a by-gone quality of life. Some are commuters and I would say that it’s surprising the number of young professionals who are native to Vankleek Hill who are returning here to raise their families, while keeping their jobs in the city.” Sproule, a native herself, as her ancestry dates back to Simeon Van Kleeck, the founder of Vankleek Hill. Simeon’s son, Simeon Jr., had a daughter named Maria Louisa Vankleek, who was Sproule’s great-great-great-grandmother.

According to the history noted on the town’s website, Simeon Van Kleeck and his wife Cecilia Jaycox arrived in Nova Scotia from the former British Province of New York in 1783. Simeon, of Dutch descent, was a demobilized officer who had supported the British crown during the American Revolution. As a United Empire Loyalist, he was to receive land in payment for his services, and he applied for his grant several times. The legend is that while he waited for a decision, he sighted high ground on a plane of flat land south of the Ottawa River. Today that land is the location of Vankleek Hill. 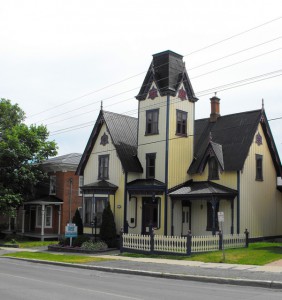 If you are an admirer of “Gingerbread” or “Victorian” design, there are still more than 250 stunning Victorian-era homes here with original gingerbread woodwork adding architectural detail, ornamentation and features accented with porches and peaks. The classic backdrop for the gingerbread is the distinctive red brick. At the turn of the 19th century many brick factories flourished in town, and many of these beautiful brick homes exist in the same condition as when they were built.

Worth mentioning as well as a testament to their historical pride, are the murals in the center of town featuring scenes from the past. All four historical murals were painted by artists Liz Skelly and Odile Têtu.

Stroll along the picturesque streets lined with elegant homes, restaurants and businesses, where children play outside until after dark and safely walk home. A relaxed pace exists in this quiet yet vibrant town, where you will feel like you’re taking a walk back in time.

For more information contact The Vankleek Hill and District Historical Society located in town or visit www.vankleek.ca.
To get acquainted with this charming town or to find out about their next event, visit www.vankleekhill.ca.
For weekly news, visit The Review at www.thereview.on.ca.
For information about properties in the area, Re/max Supreme Broker of Record John Clouston specializes in this and other eastern Ontario communities such as l’Orignal, Alexandria, and Hawkesbury. 613-872-1110. www.johnclouston.com