Like sparkling gem on a golden necklace, beautiful cities line the Côte d’Azur. The center jewel of this Tiffany-box coastline is France’s fifth largest city, Nice

After grabbing a chocolate croissant for breakfast, it is well before seven o’clock when I leave my hotel and begin walking toward the beach. At first, the streets seem eerily deserted but soon I begin to see the occasional person heading off to work as the city awakes. Along Avenue Jean Médecin I pass the grand Basilica of Notre-Dame de Nice. The largest church in Nice, this neo-gothic structure was built just a few years after the County of Nice formally became a part of France in 1860. Before that, control of Nice changed hands many times, though it was often under the jurisdiction of Savoy and later Sardinia.

Further along the Avenue Jean Médecin, past countless hotels and stores (including the famous Galleries Lafayette department store), I enter the Place Massena. This huge square, rimmed by red ochre buildings and featuring grey and black checkered squares in the pavement, is almost completely desolate.

Except for one police officer on foot patrol and a couple of city workers pressure washing the pavement, I have the entire place to myself. This is one of those times when dragging myself out of bed at dawn delivers an ample reward. To the right is the Jardin Albert 1st, a serene verdant garden with palm and pine trees basking in the Mediterranean sun. To the right, a swath of greenery and fountains continues through the Espace Massena, Leclerc Square and Promenade de Paillon. All together, they form a park-like oasis amongst the narrow, tightly packed streets of the city. Situated at the southeast end of Place Massena, in a semi-circular section, is the Fontaine du Soleil with its five bronze statues representing Mercury, Venus, Earth, Mars and Saturn surrounding a colossal 7m (over 22 feet) marble sculpture of the sun god Apollo. 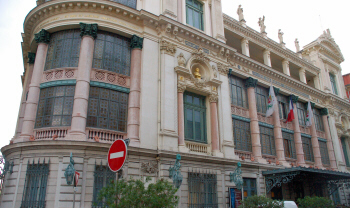 On my way from Place Massena to the Cours Saleya market, I pass the beautiful Nice Opera House.

Home to the ballet, philharmonic orchestra and the opera, the ornate building exudes a cheerful refinement with its rose stone columns, green patina metal awning, doors and hanging light fixtures set against a cream coloured façade, all crowned by sculptures of the four muses: music, tragedy, comedy and dance.

Barely a minute away, the merchants at the Cours Saleya are setting up their produce and flower stalls. Every Tuesday through Sunday, this Marché aux Fleurs fills with the scent of fresh blooms and the brilliant colours that thrive in the sunny microclimate of the Côte d’Azur. In a few hours, locals and tourists perusing the farmers’ wares will fill the market. 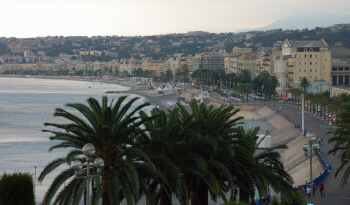 For the best views of Nice, one must go to the summit of Castle Hill. Perched high above the city, Castle Hill was once the site of a medieval château but now it is a park with children’s playgrounds and incomparable views. There is an elevator but this day, whether it is still too early in the morning or maybe it’s just out of order, I will have to climb the stairs. It is at least 400 steps up and somewhat taxing. Luckily, with the aid of the cool early morning temperature and a thick cloud cover, the climb remains thoroughly enjoyable. However, attempting this trek at midday during the summer would surely leave me with a very different impression!

Looking out over the brick-red tiled roofs, cradled between a ring of mountains on one side and the deep blue waters of La Baie des Anges on the other, Nice is quite simply exhilarating. Following the curvature of the bay and beach is the Promenade des Anglais. This wide, 8 km (5 mile) palm tree lined walkway, running alongside a busy six-lane boulevard, is named for the wealthy British visitors that financed its construction. Much like the Canadian snowbirds that head to the warmth of Florida each year, British aristocrats began spending their winters in Nice during the late 18th century. These vacationing Brits proposed and paid for the construction of the famed promenade that is now synonymous with Nice. 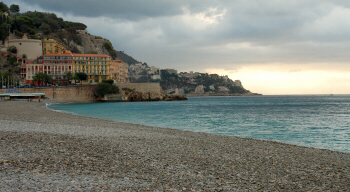 Nice’s beach is often referred to as a pebble beach, but I would hardly call fist-sized stones pebbles.
It is incredibly difficult to walk along the beach and I can only manage a snail’s pace without twisting my ankle. I now realize how necessary the Promenade des Anglais is for strolls along the waterfront! In an effort to pick up my pace, I remove my wedge-heeled sandals and try walking barefoot, which proves to be completely impossible.
By the water’s edge, the smooth stones diminish in size, making it easier for me to step into the Mediterranean waters – although the stones remain far larger than, what I would call, pebbles. After traversing the rocks, I feel almost triumphant, standing ankle deep in the warm and refreshing water.

Another Jewel of the Côte d’Azur

Exploring beyond Nice, a forty-minute bus ride northeast will bring you to the small medieval coastal village of Eze. Perched dramatically on a hill top 400 (ft) above the Mediterranean, Eze is essentially a cluster of cobble stoned lanes, arched passages and tiny artisan shops. 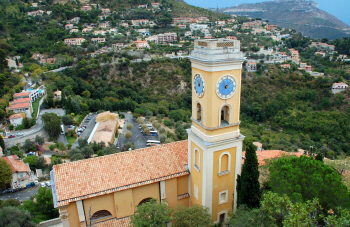 Looking down towards the bell tower of
Our Lady of the Assumption Church from
Eze`s hilltop Jardin Exotiques
Credit: Julie Kalan

Not for the weak kneed, the picturesque village lanes that wrap around the cliff sides climb ever higher. At the very top, reached by way of narrow, steep stone stairs, is the Jardin Exotiques. Here, rare succulents grow alongside the sparse ruins of a 12th century fortified castle.

From this location, above the village, the vista is beautiful but the setting can be vertigo-inducing for those uncomfortable with heights.

Looking down, I see the meandering coastline trailing off into the distance, the moyenne cornice roadway carved into the surrounding hills and the striking blue clocks that grace every side of the village church’s bell tower. Back down at the village’s elevation, the exterior of the Our Lady of the Assumption Church is a pleasant, welcoming orangey-yellow, while the Baroque interior is intimate and elegant.

The Scents of the French Riviera

Beside the village of Eze is the Fragonard perfume, soap and cosmetic factory. Painted a few shades darker than that of the Eze church that overlooks it, the factory resembles a living museum. Looking through glass walls, visitors observe the bright, open workstations manned by two or three lab-coated workers. Taking the free guided tour, I learn about the techniques used in making perfume, including the different methods of extracting fragrance from plants and flowers. Creating the fragrant blends is the job of the perfumer, often referred to as “le nez.”

Many of these perfumers, with their highly sensitive olfactory sense, continue a family lineage of generations of perfumers. The tour ends in the Fragonard shop, a large room with counters displaying a vast selection of scented items. Perfumes, eau de toilettes, bath salts, lotions, creams, soaps, candles and more, are available in numerous scents. Rose, orange blossom, vanilla, jasmine, freesia, wisteria and, of course, Provence’s acclaimed lavender top the long list of scents that are blended to create the astonishing Fragonard fragrances. If you are looking for a gift to bring home to someone, this just might be the place for one stop shopping. 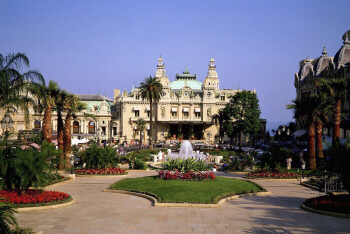 Monaco, a playground for the world’s multi-millionaires, is just 8 km further east. This tiny Principality is home to the Grimaldi dynasty, the oldest reigning family in Europe. One of the smallest countries in the world, Monaco packs numerous attractions into its 2 km2 (473 acres): the world famous Oceanographic Museum, the Monaco Cathedral where Princess Grace was married and is buried, several outstanding gardens, and the Prince’s Palace where there is a formal changing of the guard ceremony each day.

The streets surrounding the casino, known as “Cercle d’Or”, are a shopper`s paradise – an ultra rich shopper`s paradise. My bank account contains far too few digits to fit into that category, so I simply window shop at Cartier, Chopard, Bulgari, Piaget, and the like. 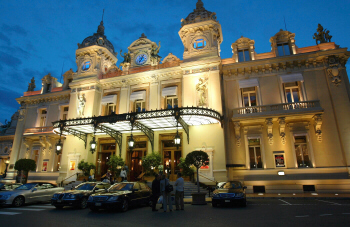 Nevertheless, even without a charge card waiting to ring up luxurious buys, wandering around Monte-Carlo is great. The buildings are beautiful and I highly recommend strolling into the Hotel de Paris to get a look at the lavish lobby. I have even managed to find a moderately priced souvenir shop by the casino, so I will be heading home with my own Monte-Carlo treasure!

For more information on sights, accommodations and dining, please visit: