Diagnosed at age six as being profoundly deaf; Claudio Bussandri overcame his handicap with the help of some very special people. Moving on from his position as Chairman of the MUHC Board, he is devoting his attention to
World Wide Hearing, an organization that helps people with hearing loss
in developing countries and Indigenous communities in Canada.

Claudio Bussandri earned tremendous success during his business career, and when he retired, he applied his formidable management skills as a volunteer board member and then Chairman of the McGill University Health Centre (MUHC) Board. After the very public resignation of the ten independent Board members, Claudio is now looking forward to continuing his philanthropic work with World Wide Hearing Care in developing countries. All this from a person of tremendous personal courage, who overcame his own handicap of deafness to graduate with Honors from McGill University, build successful businesses and then preside over the largest hospital move in Canadian history.

Claudio Bussandri’s achievements and contributions to Montreal are a long way from his modest beginning. “As part of the influx of immigrants from Europe after World War II, my parents came to Canada from Italy when I was two. They worked hard to make a new life in Montreal. My father worked the night shift, and he would usually sleep during the day. My mother worked as a seamstress.”

During our conversation, Claudio stated that two momentous interventions on his behalf “changed the trajectory of my life. In primary school, Mother St. Anthony told my mother that she would commit a ‘mortal sin’ on my behalf. She told my mother that I was failing, but suspected that I had hearing problems – that I wasn’t a slow learner. She asked my parents to take me to the Montreal Children’s Hospital to be tested. They did; and at six years of age – I was diagnosed as being profoundly deaf. Mother St. Anthony’s ‘sin’ was that she gave me passing grades in Grade 1 so that I wouldn’t be held back and labeled as intellectually slow.”

Claudio continues; “That diagnosis began three to four years of speech therapy, learning to read lips and closely following the teachers in class. I sat up at the front. The doctors thought that my deafness may have been a side-effect from medication that was administered in Italy before we immigrated. I had been very sick and almost died.”

Claudio studied diligently all though his school years. Despite his deafness, he was selected as the Valedictorian for his high school graduating class. His father died when Claudio was only fifteen, and he worked in a grocery store to bring extra money into the household. “Being the older of two brothers, my father’s early passing forced me to mature early.”

Claudio earned a scholarship and enrolled in Engineering at McGill University; and the second intervention of good-hearted people soon followed. “I was struggling in my freshman year, and I was going to fail. I met with two women from the bursary committee because they were concerned that my marks were below expectations. I explained to them that I couldn’t hear the professors in the larger lecture halls, and that I also couldn’t follow them when they turned their backs to write on the blackboard; that I wasn’t able to see their faces when they spoke. I realized that I needed hearing aids, but told them that I couldn’t afford them. Two weeks later they called me into another meeting, and gave me the money to buy hearing aids. My marks shot up and I graduated with a Bachelor of Engineering with Honors.”  With a chuckle Claudio adds; “Frankly, I was a bit of a nerd – but I got there…”

“The kindness of other people outside of my family had greatly helped me and changed the trajectory of my life on two occasions. I felt driven by the desire to show them I would live up to their expectations and honor their kindness.” 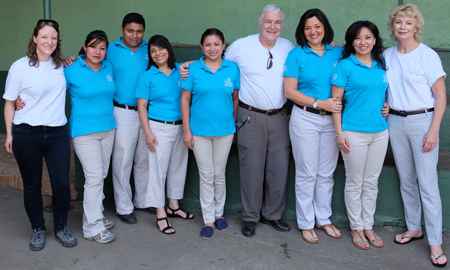 Claudio Bussandri launched into a successful business career. He started with Gillette Canada, before moving to Nabisco Brands where he held increasingly senior executive positions in different divisions of the company. He was President and CEO of Canada’s largest sugar refiner Lantic Sugar, from 1987 until 1995. He was then recruited to take on the challenge of President and CEO of McKesson Canada, at the time an ailing medical and pharmaceutical supplies company whose sales had declined from $2 billion to $1 billion and was on its way to further decline. At his retirement in 2007, McKesson Canada’s revenues were $8 billion, a market share that had doubled and their annual profits had increased by a factor of eight.

“I always had to work harder to overcome my handicap. In business, I know that I didn’t have the skill sets to do all the jobs; that I needed a solid and talented management team working with me. After establishing a clear vision of the company’s direction, it was important to me that the management group needed to superbly execute the strategy.”

During his business career, Claudio served as a Board Member and Chairman with The Canadian Association for Pharmacy Distribution Management, the Food and Consumer Products Manufacturers of Canada, the Board of Trade of Metropolitain Montreal, the Canadian Council of Chief Executives and Le Conseil du Patronat. Despite all that business activity, he told me that his greatest dedication was as a husband and father.

The impact of other people’s kindness made a lasting impression on Claudio Bussandri, and he served as a volunteer Board member and subsequently Chairman of The Children’s Hospital Foundation from 1992 to 2015. He also started as a volunteer Board member with the McGill University Health Centre in 2002, and was appointed Chairman of the Board in February, 2012. He has also served on the Board for the Montreal Oral School for the Deaf.

“Quebec was the only province that didn’t have a procedure for early detection of hearing loss in infants. In 2008 I accepted to Co-Chair a 64-member Quebec Coalition for Newborn Hearing Screening to pressure the government to implement a program. We were successful, and several years later Quebec launched a province-wide implementation of a simple and effective hearing test for newborns.”

Claudio’s personal experience illustrated the advantages of early diagnosis so that hearing impaired children can benefit from better community involvement, school performance and career development. “In my case, I would have been labeled as intellectually slow if I hadn’t been diagnosed. I didn’t want that to happen to other children. We can transform lives beginning with a simple hearing test.”

“Our community has a lot to be proud of with the McGill University Health Centre. We train 65% of the physicians who graduate from McGill Medical School, we have the largest research institute in Quebec and one of the largest in Canada; and we have the best rate of successful medical outcomes with trauma cases.” 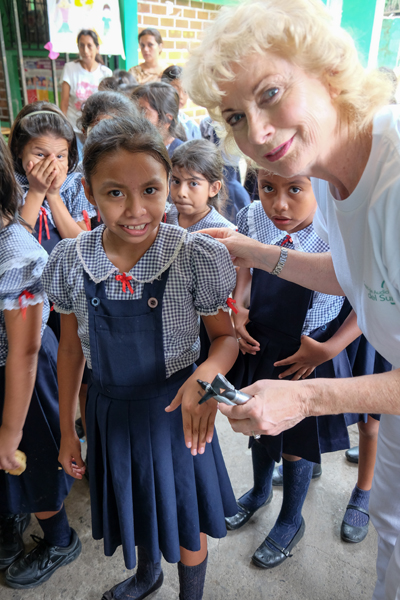 “One of the proudest moments of my life was leading the parade with the Mayor, numerous community leaders, along with Julie Quennevile (President of the MUHC Foundation) to the new hospital at The Glen. That was magical! During the months of April, May and June, our staff successfully carried out the largest move in North America.”

“I’ve been retired for 10 years, and at seventy, I now want to devote more time to World Wide Hearing, an organization that helps people in developing countries with hearing loss or impairment.  We’re recognized by the World Health Organization, and we’re active in developing countries like Guatemala and Jordan. I’ve established the World Wide Hearing Foundation International to help fund the WWH activities.”

“Dealing with hearing impairment is more complicated than eyesight. You can give a person a pair of glasses and the result is immediate – even with non-prescription lenses. Hearing involves an audio test to determine the level of compensation needed, fitting and then preparing a mold for the earpiece. We work with female entrepreneurs to go out and do the field work.” Continuing, Claudio explains; “We can train local entrepreneurs to be audio-technicians in just four weeks. Using new technology, they can test for hearing loss and then prepare and fit a hearing aid in less than an hour. They refer more complicated cases to audiologists.”

“We learned the hard way that even in a poor country, giving a hearing aid doesn’t work. The recipient doesn’t perceive a value. So while we sell the aids, we set a price that is within reach of the family, for a price that relates to their economic situation. In most cases, we “sell” the hearing aids at far below even their production cost. However, the family’s perception is that they have made an investment in their child’s future. The child thereby receives the support of his family – partly because they have made an investment.”

“The right hearing aid in the right person can transform them, making them productive members of society, and make them happy with their families and friends.”

“In Canada we have many of our Inuit people without proper hearing loss diagnosis and treatment. The J.W. McConnell Foundation is assisting us in delivering World Wide Hearing services here in our own country.”

“World Wide Hearing recently received an important donation of $1.5million from Google. We’re very proud of the recognition and endorsement of our work from such a high profile company.”

Claudio is joined by his wife Diane in his philanthropic efforts, accompanying him on a recent trip to Guatemala to give hearing tests to approximately 1,400 children.  “A successful entrepreneur herself, Diane is a team leader for Habitat For Humanity, and her most recent project will take her to Cambodia. She’s also the Chair of LOVE (Leave Out Violence – Quebec).”