When first interviewed by The Montrealer in 2007, Dr. Joe Schwarcz was one of a few people working at the McGill Office of Science and Society. Under his leadership, the office has grown to include a mixture of scientists, researchers and communications specialists – all working for the same goal; to separate scientific fact from fiction.

“The pandemic has been a challenge for us.” states Dr Joe. “We have so much disinformation and misinformation to deal with, and we do our best to debunk these wild and often dangerous claims.” While social media can be a dangerous tool for spreading misinformation, Dr. Joe and his team are able to harness the power of the internet to combat misinformation. “It’s like we’re playing whack-a-mole; as soon as we debunk some outlandish claim or ‘cure’ – another one pops up. All kidding aside – the prevalence of misinformation is a serious problem.” Dr. Joe continues; “Donald Trump was a curse, from eviscerating the Environmental Protection Agency (EPA) to his scientifically illiterate statements about COVID-19.”

“Dr. Joe” – as he is known to Montrealers – has created a multi-disciplined career as a chemical scientist, magician, author, broadcaster, speciality food marketer, and motivational speaker. All this while serving as Director of McGill University’s Office for Science and Society. His mandate is to demystify science for the public, the media and students. Got a question about chemistry in everyday life? – call Dr. Joe.

Born in Hungary, Joseph Schwarcz was an only child. His parents had lost their respective spouses and their parents during the war. His father survived a Russian labour camp, and his mother was a Holocaust survivor.

During the Hungarian uprising in 1956, the family escaped into Austria from their nearby border town. “We had a guide to take us through the barbed wire, because there was a minefield at the border. There I was – nine years old and crawling under the wire, trying to avoid the searchlights, and the mines.”

Like so many immigrant families, the Schwarcz family landed at Pier 21 in Halifax and came to Montreal by train. It was just before Christmas and the city was decorated with lights. Dr. Joe reminisces that his first impression of Canada was one of cheerful lights. The family stayed a week with a relative before being able to rent their own apartment.

“My father got a job almost immediately at Handy Andy as an accountant. Unfortunately, we were robbed on the second day – so we weren’t off to a good start.”

Joe attended Logan School on Darlington, and in Grade 3 he was invited to a friend’s birthday party. It would prove to be a life-changing experience for nine-year-old Joe. “There was a magician performing – and he had three ropes that he was going to change into one. Instead of using the usual magic words like Abracadabra, he said that he was going to sprinkle a ‘Magic Chemical’ on the ropes.” Dr. Joe continues, “This reference to a chemical intrigued me so much that I went to the library and looked up chemistry. I’ve followed the two disciplines ever since.”

“As soon as I started reading about chemistry, I was intrigued by its importance in everyday life – how chemistry could explain how the world works.”

“At the same time, I got into magic. I realized that some people were pretending that it was real.”

Dr. Joe continues to describe his elementary school chemistry. “We spent time memorizing formulas without the teacher ever explaining a connection to everyday life. This especially bothered me because I knew what it should be like from my own research in the library.” Dr. Joe would find that even as a university student, chemistry was still a dry subject.

“The McGill OSS aims to demystify science for the public, foster critical thinking, and separate sense from nonsense on the scientific stage.”

Dawson College was Dr. Joe’s first employer, and he soon was invited to be an Adjunct Professor at McGill, where he has taught ever since. In 1999, he was promoted to be Director of McGill University’s Office for Science and Society. “It’s a unique venture – the first time it’s ever been done. Our mandate is to demystify science and foster critical thinking. There is a tremendous scientific illiteracy in the general public…everyday there’s a new scare.

“Warming to the subject, he continues; “There’s a core of people who believe that there is a kind of unholy alliance between science and the pharmaceutical industry for profit. They promote the myth that ‘nature is good – synthetic is bad’. They forget that cholera and dysentery are no longer part of our daily lives thanks to science.”

“Once a month we bring high school students to McGill and talk to them about science at a university level. We want to motivate them to consider science in university; and we find that these sessions are effective.”

I asked how a chemistry academic came to become a popular broadcaster. Joe explains that his media career began in 1980 as a result of the late Ted Blackman’s influence. “Ted was at The Gazette, and I had done a demonstration at the UNESCO Pavilion at Man and His World. I had shown how you could make a foam called Polyurethane by mixing two liquids.

Ted described it as Urea Formaldehyde (a very controversial insulating product) in his column, and I wrote to the Gazette and explained the error. Having realized that he laid a scientific egg, Ted printed a retraction, noting that he had skipped too many science classes in high school.”

“I got a call from CJAD to talk about the issue on air, and the next week there was another science issue. 42 years later I’m still broadcasting with CJAD, and I think it must be the longest running radio show in the world. I have a weekly column with The Gazette called “The Right Chemistry.” In concluding his introduction to the media world, Dr. Joe acknowledges Ted Blackman: “Ted was one of the brightest men I’ve ever known.”

Dr. Joe has published seventeen books which have been translated into five languages, sold around the world and are all bestsellers. Additionally, he was the chief consultant for two Readers’ Digest books, “Foods that Harm, Foods that Heal” and “The Healing Power of Vitamins, Minerals and Herbs” which have both been international bestsellers, selling millions of copies. “When you publish – there is something that exists, something permanent.”

In reference to his academic accomplishments, Professor Schwarcz has received many awards for his teaching of chemistry and his ability to interpret scientific issues for the general public. He has received the Royal Society of Canada’s McNeil Award and the American Chemical Society’s prestigious Grady-Slack Award. Dr. Joe is the only non-American to receive this award, and he is in good scientific company with Isaac Asimov and New York Times columnist Walter Sullivan. Dr. Joe had been awarded four Honorary Doctorates from four universities.

“I’ve found that the reporters are receptive and that they want to make sure that they get it right.” He continues; “A lot of scientists don’t want to speak to the media. However, we need to put an emphasis on communicating with the public. I realize it takes effort. In fact, being a scientific communicator is itself a speciality that requires rehearsal and planning to be effective.”

“A big part of my job is to separate sense from nonsense.”

Dr. Joe introduced the Trottier Science Symposium twelve years ago. “Lorne Trottier is passionate about science, and every year we have two to four speakers at the Mount Royal Centre. Over a thousand people attend the two-day symposium for meaningful presentations and discussions.”

“We publish an online weekly newsletter that is available on Saturdays. It’s a blend of easy-to-read scientific information, keeping in the tradition of our objective to foster critical thinking. People can sign up through our website, and they’ll be able to find hundreds of articles there.”

“We post a short, three-minute videos almost every day. I can squeeze a lot of information into three minutes.”

By now you might be wondering if Dr. Joe has time to sleep, let alone have a life beyond science. Joe met his late wife Alice when they had summer jobs at Reitman’s. Joe started driving Alice home, a romance ensued, and they married in 1973. “About five years ago, Alice woke up one morning and couldn’t speak. We went to the hospital and by that evening we had a diagnosis that she had gioblastoma, a rare form of brain cancer that is virtually incurable. Alice passed away in March 2016.” Joe continues, I have three great daughters and eight wonderful grandchildren. And I’m fortunate to have met another woman to share my life with.”

Broadway musicals are a favourite with Dr. Joe. “My introduction to Broadway musicals was with a presentation of “Camelot” starring Richard Burton, Robert Goulet and Julie Andrews. I was hooked!” Since then, he has seen over 130 different Broadway musicals, travelling frequently to New York and London, and occasionally to Toronto.

Joe maintains a trim physique with daily workouts at a gym near his McGill office in the Otto Maas Chemistry Building. “I played a lot of baseball and hockey in my youth, and I still have a keen interest in sports. I tune in ESPN every night to see the sports news.”

Dr. Joe’s comfortable McGill University office is a long way from the minefield at the Hungarian border; and the terror experienced by a nine-year old boy crawling his way to freedom. Perhaps it was this experience that shaped his ability to see beyond the present and to question how the world worked. After spending a little time with Joe, you can see that the curious 9-year-old who ran to the library to look up “Chemistry” still resides in the man who has become a huge success by many standards. His intellect is palpable, his eyes alive with curiosity…he’s “Dr. Joe” – Montreal’s favourite scientist.

For more information about The McGill Office for Science and Society, please visit: www.mcgill.ca/oss/ 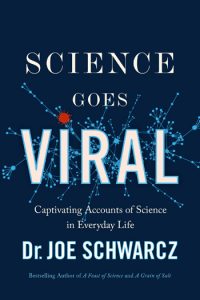 Dr. Joe’s latest book, Science Goes Viral breaks down the science of essential oils, placenta creams, intermittent fasting, and of course the spread of COVID-19 misinformation in this new collection from the master of demarcating non-science from science

Science Goes Viral provides a framework for coming to grips with the onslaught of COVID-19 information and misinformation in this ever-changing pandemic. Here, you’ll learn about the first antibodies ever identified, the connection between tonic water and coronavirus, and whether we can zap COVID with copper. And although our thoughts and daily activities have been hijacked by the pandemic, life does go on, as does the pursuit of science. Dr. Joe features his usual array of diverse topics, including biblical dyes, essential oils, Jean Harlow’s hair, Lincoln’s magician, and bioplastics along with assorted examples of quackery.

Delving into the many fascinating facets of science can serve as a welcome distraction from the COVID curse. In fact, enchantment with science can also be contagious.