“It seemed like in North America especially, it (Vannelli’s 2009 album A Good Thing) was either too something or other. It just wasn’t right for people’s palettes in 2009.

Gino was waxing poetic about the reason for the re-release of a decade old album that’s been remastered with four new cuts added. The jazzy More Of A Good Thing is out now on SRG Records and features elements of Miles Davis, Americana and lyrics fueled by Gino’s poetry.

A record label exec contacted Vannelli and shared with him that the album didn’t get its just due when it was it released over a decade ago, and that it should be given another chance.

“What leads you to places is what draws you to where you want to go. The wind at your back or perhaps even the frustration of where you’ve been. In such a case for A Good Thing, when it came out, I was so proud of myself. In many ways I thought that I had outdone myself. I just kind of chalked it up as one of those things in life.”

“Ten years later (label founder and record producer) Claude Villani from SRG Records gave me a call and said; ‘I enjoy playing A Good Thing so much.’ I said I do consider it one of my best works. So we decided together to re-release it and to add as many cuts as I wanted to add. I did add four cuts to it. I also edited part of A Good Thing and I remastered it so that it would sound exactly like what are the standards of today. Even after ten years, digital recordings continue to improve even further. It’s really what I wanted the album to be and what was my frustration ten years ago and the fact that it really stood the test of time and I thought that it deserved a second listening.”

The album’s delicious and lush arrangements have jazz stylings, but it’s not a jazz record. It’s still classic Gino Vannelli pop with moods of Miles’ Birth Of Cool era thrown in for colouring.

Vannelli burst onto the scene after ambushing label owner and legendary trumpeter Herb Alpert of A&M records outside of the imprint’s office and studios in Hollywood and convinced him to give him a record deal amid security guards chasing after the handsome Montreal born singer-songwriter.

Vannelli released his debut album “Crazy Life” in 1973. Vannelli had previously released a single on RCA Canada in 1970 called “Gino Bold” under the stage name Van Elli after being told his real name sounded too Italian. Vannelli was dropped soon after the release of the single which went nowhere.

After becoming the first white singer to perform on the popular African-American dance program Soul Train”, he began touring with Stevie Wonder as an opening act in 1974.

His 1978, Vannelli released his biggest-selling album ever Brother To Brother which contained the soulful ballad chart-topper I Just Wanna Stop.

Despite the success of the Brother To Brother album, it would be his last for the label after 6 albums, a Grammy nomination and several Juno Awards.

“After it stood the test of time, I thought A Good Thing
deserved a second listen.” – Gino Vannelli

Vannelli would sign with Arista Records and return without missing a step on 1981’s Nightwalker which contained another huge hit for the singer in Living Inside Myself. 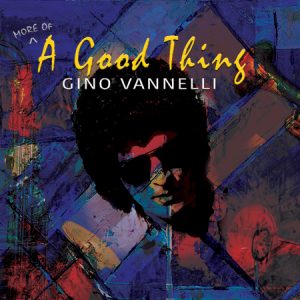 He grabbed another Juno Award in 1984 for the hit-single Black Cars from the album of the same name.

His 1987 set produced another hit Wild Horses with its gorgeous shuffle beat, hypnotic harmonica and dreamy lyrics of driving down the desert highways of the American southwest region.

Vannelli would then take his family and move to New York City and then Los Angeles followed by a brief stay in Amsterdam. For the last few decades, Vannelli has lived in Troutdale, Oregon with his family, where he has recorded albums that have ranged from pop, acoustic, jazz and opera.

His latest offering More Of A Good Thing is one of his finest works yet. Among the four new tracks, there’s the remake of his 1978 track The River Must Flow as a duet with R&B crooner Brian McKnight. McKnight told this reporter in a radio interview about 15 years ago that his biggest musical influence was Vannelli.

When I asked Gino if McKnight, who is his collaborator now, if the R&B sensation had shared this with him. He sheepishly replied: “Artists don’t talk to each other that way. We kinda shoot the breeze a lot about what’s going on musically and some of the great things happening and what to take from them and build upon them. Many times he’ll ask me about how did I write such and such in the 70’s;” said Vannelli dismissively, downplaying his musical impact on other artists.

The Measure Of A Man is one of the highlights of the album. Featured on the 2009 edition of the album, the song Gino describes about a true-life experience with a vindictive lover, features lyrics Gino originally composed as a poem.

“No, you can’t judge a man
By the color of his skin
You can’t rate his cool
By the scruff on his chin
Don’t know what makes him tick
By the Rolex on his wrist
But you can judge a man

The conga driven track with samba piano riffs, make this soulful one a tune for the ages.

As far as live shows go; and judging from a sold-out performance at Place Des Arts in 2019, Gino doesn’t appear to have lost a single step while performing with a crack, tight band from Oregon that only compliments his amazing catalogue.

However, covid has put things on hold for the legendary singer. “I had 12 really good concerts planned this fall. I should be in Europe right now; but they had to be postponed. The travel is still too crazy. I mean from country to country, the laws are a little bit different. You know, there are delays so I decided to postpone it.”

However Vannelli shared a possible local treat for us. “There’s talk about doing a major concert with The Longueuil Symphony in Montreal at one of the big cathedrals for 2022.

Meanwhile, Gino is at work on another album as well as producing and writing for other artists. It appears that he “doesn’t wanna stop”!