For as long as I have been following Greg Hardy’s efforts – a span of many decades, now – he has continued to surprise me. I’ve always been fascinated by the way he manages to make landscape paintings that are at once deeply connected to the history of Canadian art and wholly contemporary.

Hardy plainly sees himself as heir to a tradition of landscape painting peculiar to Canada – a tradition of robust, muscular, recognizably local imagery that began with the Group of Seven, early in the last century and has flourished, more recently, on the Prairies, where he primarily works. It’s a heritage that rejected European academic ways of depicting the natural world as unsuitable for dealing with Canada and embraced the innovations of European Modernism, not as much because of enthusiasm for the new as because the language of European Modernism offered a means of emphasizing the unique, non-European character of Canadian motifs. Hardy’s choice of subject matter announces his affection for his native province as loudly as the work of any of his twentieth century predecessors but there’s nothing nostalgic about his approach. His version of the legacy of European Modernism declares his appetite for the new. The scale, freedom, and lack of inhibition – even to the point of downright brashness – of his paintings locate them unequivocally in the present. 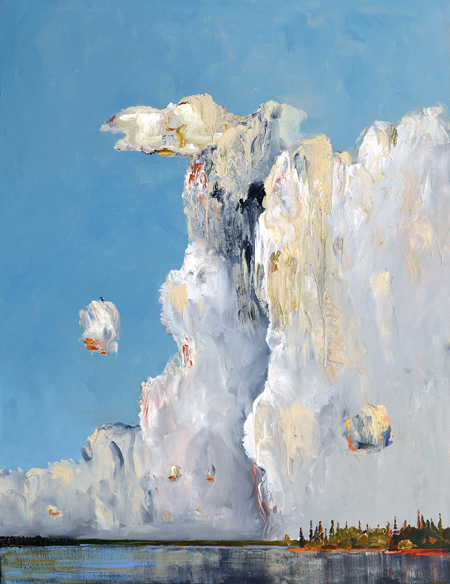 Over the years, I’ve also been fascinated by Hardy’s ability to make works that are unmistakably about specific places, seasons, weather, and times of day, and just as unmistakably about the act of painting and his own palpable enthusiasm for that act. Even if we’ve never visited the often remote, unspoiled places where Hardy finds his motifs, he convinces us of the truthfulness of his observations; first hand acquaintance with some of “Hardy’s places” proves the accuracy of that impression, in the way that a visit to “Cézanne’s places” proves how astonishingly dependent the master innovator was on the character of his native region as stimulus. Whether or not we can identify their sources, Hardy’s images seem to reverberate so powerfully with our own experience of place and of changing qualities of light that we are sure that we would recognize that low-lying island that punctuates his lake pictures or that we have seen cloud formations very like the ones that dominate his most recent paintings. Yet just as there is nothing reactionary about the way Hardy conceives of landscape painting, in the first place, there is nothing literal about the way he achieves this illusion of preternatural sensitivity to particulars. His works are clearly rooted in perception, but at the same time that we are exhilarated by his evocations of long Prairie vistas and big skies, we find we must wrench our attention away from this nominal subject matter and concentrate entirely on his amped-up color, on the physicality of his paint handling, and on the syncopated rhythms of his gestures. In other words, at the same time that we give ourselves up to the specific allusions and associations conjured up by Hardy’s audacious color and brushwork, we are compelled to explore his work closely for its abstract, formal qualities, almost divorced from reference. The tension between these two readings is part of what gives Hardy’s most powerful paintings their intensity and energy. 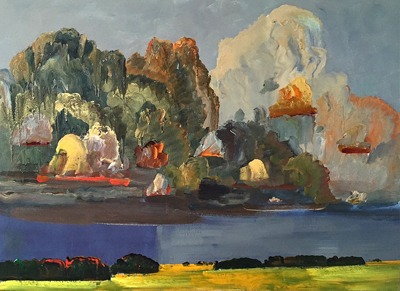 Hardy’s most recent paintings seem to me to be among his most potent to date, as well as among his most evocative, self-sufficient, and – despite their concentration on very specific subjects – elusive. The sheer vigor of these lively works demands our attention. So does the ferocity of Hardy’s motifs, which are often emblematic of weather at its most threatening or unstable. Yet he suggests that however dramatic the moment he chose as his point of departure, it could soon be still more dramatic. Like the tension between image and means, this sense of imminence – the implication that everything will change for the worse, if we look away – adds to the excitement of the series.

Hardy makes the speed and forthrightness of his brushwork, the saturation of his superheated color, and the physicality of his paint into metaphors for extreme conditions in the natural world. In a painting evoking a threatening storm, we are less involved by its meteorological accuracy than by its roiling paint and murky, unnamable color, yet it’s the roiling paint and murky color that create the unease that would be provoked by the natural phenomenon. A painting with bright white clouds is as just as extreme in its suggestion of the brilliance of unmodulated sunshine through generously manipulated pigment. Hardy never depicts but instead, offers us essentially abstract, new kinds of configurations that are equivalents of nature’s varied moods. Once again, he has surprised and fascinated me.

Karen Wilkin is a New York based writer who specializes in commentary on the visual arts. Gregory Hardy’s works are being exhibited until July 2 at Han Art in Westmount.