Perched behind my drum set, I often think that I have the best seat in the house. I am in the middle of the action, visually and aurally. The clarity on stage is pure, balanced and offers direct sightlines. The performers’ proximity provides an intimate artistic experience. Moreover, the visual contact can change the course of a song or even a whole set of music. A trio or quartet can play an evening of music without ever speaking; body language can say it all. The other advantage is the sound: on stage, the sound comes directly from the source.

From a young age, I have been drawn to sound, particularly how it is crafted. Part of this intrigue is fueled by how the sound of an instrument can change depending on who’s playing it. Various people can play the same instrument but draw a completely different sound out of it. To this day, this fascinates me. To my ears, the piano embodies this the best.

The piano has a rich and musically diverse history of over 300 years; thus, it cannot be pigeon-holed into one genre. Its borders are boundless. Despite its prolific history, one can still achieve a personal and identifiable sound from the instrument. Language, vocabulary, and style of music certainly play a role in sound production, but even just one note, the same note played by different artists will sound differently. But why? This captivates me. 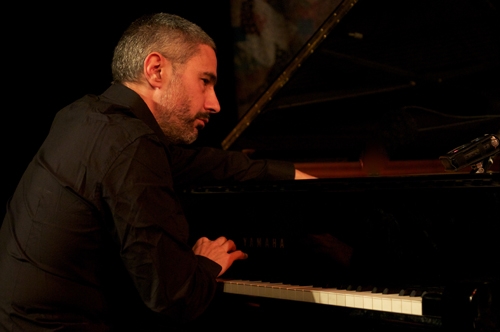 Originally from France, Jean-Michel Pilc has an astounding and pure voice on the piano

Montreal has a rich and vibrant history of fantastic pianists, and the present is no exception. When I discussed this topic with pianists whom I collaborate with often, their reactions were immediate and without hesitation. Originally from France, pianist Jean-Michel Pilc has been living in Montreal for the last five years. He has an astounding and pure voice on the instrument and has brought a wave of fresh and exciting sounds and ideas to the local scene. When I described earlier how a group can play without verbal communication and rely solely on the “sound,” I was thinking of Jean-Michel. When one hears him play just a single note, the answer is clear: “My sound is a reflection of who I am. How the process works I have no idea, and I want to preserve the mystery. Otherwise, it wouldn’t be my sound anymore, only an artifact.”

Mentorship plays a very large role in fostering the younger generation of musicians. Every artist has a different story and a unique voice, and mine intertwined with Steve Amirault’s when I was in my early 20s. He was and still is very encouraging to young musicians searching out a path in music. The Nova Scotia-born pianist has called Montreal home for many years and is a staple on the local and national scene. He says, “The personal sound of a pianist is a fascinating topic. Since there are only a few schools of piano technique and countless pianists, I believe it comes down to two basic facts. Firstly, no two players have exactly the same physique and therefore use their bodies in distinctive ways to produce their sound. Secondly, and more intangible, is that the pianist reproduces the sound they hear in their head which of course is influenced by their unique life and musical journey.”

As these two pianists demonstrate, sound production is manifested from the player, and not solely from the instrument. The connection between a musician and their instrument allows for a multitude of sonic possibilities, just as no two people would recite a poem with the exact same inflection and emphasis.

Jim Doxas is an award-winning jazz drummer who has performed with many of North America’s finest musicians, and has performed on more than 150 albums. He also lectures and teaches percussion at McGill University’s Schulich School of Music and at Concordia University. To learn more about Jim and his music, please visit: www.jimdoxas.com