King of Canada playfully yet intelligently examines Canada’s 10th and longest-serving prime minister, still seen on the fifty-dollar bill. Through vaudevillian charm, the play reveals how Canadian politics have often been (and still are) a balancing act between what should be done for the good of all and what is done to maintain power. First elected in 1921, William Lyon Mackenzie ‘Rex’ King led Canada out of the Depression and through the Second World War, navigating the many subplots of that dark era. He is well-known for his love of séances, in which he apparently was able to communicate with the spirit of his dead mother, his dead dogs, and a myriad of other afterworld contemporaries. Here the audience helps to conjure him back from the spirit world and his peculiar life choices and questionable political impacts are revealed; his actions and inactions as duly elected leader of the country put on trial with spectators the final judge of his legacy. In confronting the past, the audience is forced to confront their own choices in the present—to speak out or remain silent; to take action or choose inaction; to step up or step away? You will only get the government and the country you fight for…

The Medium: “While we cannot alter the shadows of things that have been.
We can always alter how we perceive them now.” 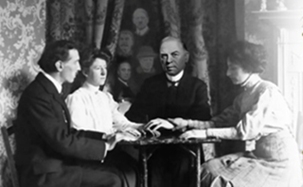 Infinithéâtre remains committed to being the first English company to welcome audiences to live theatre in Montreal. (And with a world premiere to boot) The cast and production team have been rehearsing full on since September; everything is ready to go. With that in mind, the company is thrilled to announce these two live-streamed performances, absolutely free. These exclusive King of Canada presentations, with full production values, are on Friday, November 6 at 7:30pm and Sunday, November 8 at 2:00pm. Watch the show from the comfort of your own home…

In keeping with the US presidential elections—we had our very own oddball, questionable head of the country. This new play highlights the secret séances put on for PM Mackenzie King, while still in office! Paul Van Dyck’s witty and biting examination is a gem of a script serendipitously perfect for these difficult times. Brian Dooley mesmerizingly embodies King while Ellen David plays The Medium, along with conjuring 30 other characters, including 3 dogs all named Pat.

Playwright Paul Van Dyck was inspired to write about King after visiting the Edwardian mansion Fulford Place, where Mrs. Fulford held séances for her elite friends, including Prime Minister King. “After reading his biography, I saw this strange little man as the perfect character for symbolising Canada’s coming of age story. He had a buffoonish Shakespearean quality about him—he thought of himself as Henry V, but he was more like Bottom the ass. His personality belonged in a sad comedy, but his actions shaped our nation for the first half of the 20th century. There’s never been anyone like him, and there never will be again,” he stated. “As much as this play pokes fun at our dirty past, my hope is that it points a finger at our dirty present; not far from now people will be looking at the atrocities of our time… But if none of that comes across, then I hope I make some people laugh and think, because we all really need a good laugh right now.

“When London theatres were closed by the plague, Shakespeare wrote some of his best plays. We at Infinithéâtre have pulled together, and with an inspired director, a brilliantly creative design team and actors at the top of their craft, have forged something truly special,” said Infinithéâtre Artistic Director, Guy Sprung.

For reservations to view the livestreams please sign up at https://forms.gle/WkmKeRNz9FNKGfCE6
A direct access link will be sent to the email address provided prior to the beginning of the show.
The stream is free, donations gratefully appreciated

For any questions, please call the box office: (514) 987-1774 #104
People are encouraged to add their name and contact info to the King of Canada waiting list for first notice of ticket sales when theatres are allowed to open: https://forms.gle/nmHLDsDTYBVkRbya9