At the Montreal Museum of Fine Arts

Pompeii, a Roman port city along the Bay of Naples, met an untimely and catastrophic end in 79 AD, when Mount Vesuvius buried the city under metres of volcanic ash. For the next sixteen centuries Pompeii lay silently hidden from the world; only revealing its secrets when proper excavations began in the mid 18th century. Now, the Montreal Museum of Fine Arts presents Pompeii, a remarkable exhibit displaying over 220 archaeological artifacts. 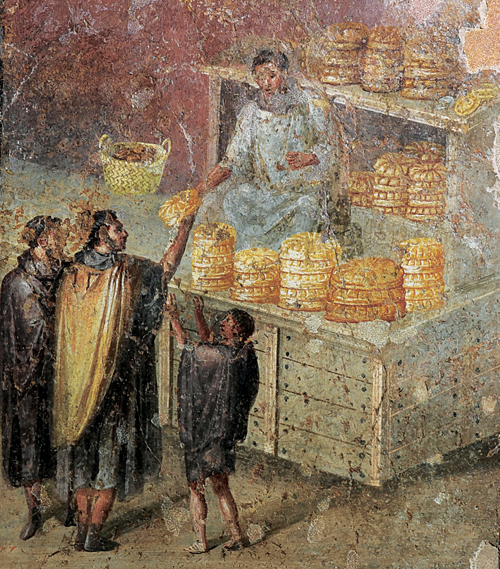 Walking into the exhibit, all eyes are immediately drawn to the three stone busts along the far wall. As if acknowledging the hosts at a party, most people head directly to these silent greeters. On the wall to the left of these striking pieces is a timeline based upon ancient coins from the museum’s own collection.  One of my favourite pieces, found on the right side wall, is a small marble relief depicting an earthquake that struck the city in 62 AD. Showing a temple and statues tilting dramatically, the piece details the affects Pompeii felt from this significant quake. The damage was so extensive that when Vesuvius erupted, 17 years later, much of the city was still in the process of rebuilding.

The second room, representing a street in the commercial hub, contains a myriad of interesting pieces: bronze carpenter’s tools, marble statues, delicate frescos and large terracotta amphorae used for transporting and storing both liquid and dry goods. Particularly impressive is the display of lead water pipes and a bronze water spout. The Romans built marvelous aqueducts across the empire, supplying water to street corner fountains, bath houses and wealthy private homes. However, even the Roman engineering prowess was no match for the earthquake of 62 AD. Many of the city’s broken water pipes were still awaiting repair when the volcano buried Pompeii.

The statuary and lovely fresco artwork were created to make an impact, but it is a half loaf of carbonized bread that resonates most deeply. A simple object of nourishment found in homes around the world, for thousands of years, humanizes the citizens of this long lost city. A fresco behind the bread shows a wealthy man handing out free bread to voters during his run for political office. 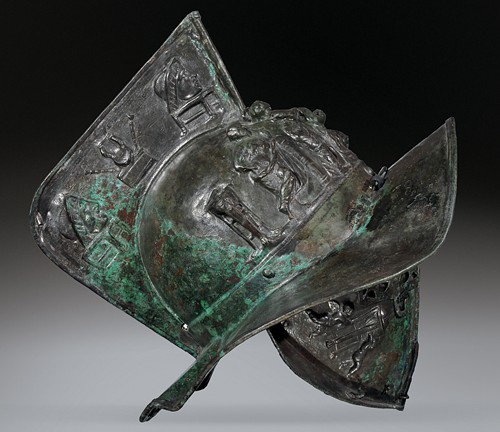 Leisure in the Roman world

Entertainment and leisure activities were highly valued in the Roman Empire. Pompeii had two theatres, able to sit a combined 7000 people. Excavated wall reliefs, frescos and statues of actors wearing exaggerated theatrical masks are on display. Bronze cymbals and a delicate bronze and bone flute illustrate the use of music for religious ceremonies and social gatherings.

Gladiator games, the Roman Empire’s most notorious pastime, involved specialized training, and specific weapons and protective gear for each type of gladiator. The bronze helmet, shoulder and shin guards on display are compiled from three different gladiator types. These gladiator types are explained and illustrated on the accompanying wall panel. 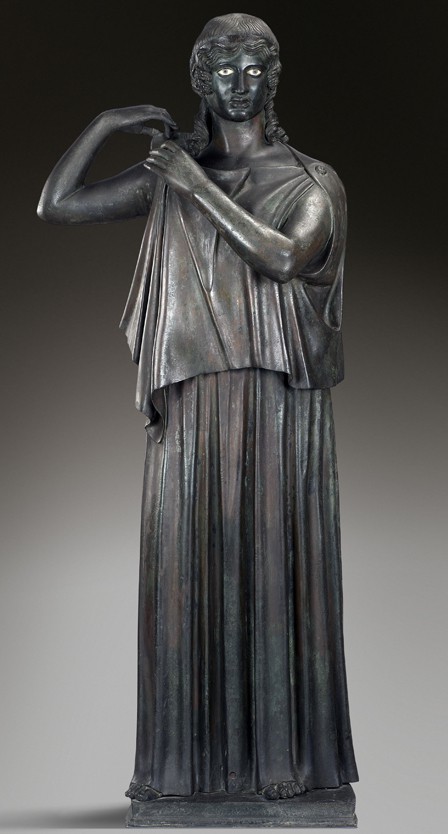 Like all cities, the homes in Pompeii ranged from small dwellings and apartments to luxurious mansions. The exhibit displays pieces from mainly upper-class homes. Water sounds fill the recreated atrium, where a small pool would collect rainwater from an opening in the ceiling. Complete with period music, the banqueting hall is lined with terracotta bowls and plates, bronze cookware and an array of glass vessels. Unlike much of the Roman Empire, the Pompeian diet included an abundant amount of seafood. A large mosaic packed with fish, eel, squid and octopus illustrates the varied and bustling fish trade in Pompeii. In fact, a condiment made from fermented fish, called Garum, was an important export and a considerable part of the city’s economy.

Pompeian gardens were a walled oasis of peaceful greenery within the busy city. Homeowners lavishly decorated them with marble statues, fountains and picturesque landscape and wildlife frescoes. A large female statue commands the center of the exhibit garden. Her eyes, inset with stone and ivory, peer eerily out from the dark bronze figure. A video projection on the back wall extends the “garden,” by providing trees that move in the breeze, birds occasionally flying though the scene, and the soothing sound of a water fountain.

A few bean bag chairs invite you to sit and take in a multimedia experience, created by Montreal‘s Graphics eMotion. The eruption of Mount Vesuvius happened in various phases throughout the 19-hour disaster. You will watch as the first clouds of smoke billow from the volcano. Then as the event progresses glowing ash and debris fall from the sky, culminating in darkness as the eruption blocks out the sun. The room itself never goes completely dark due to the spotlights on two pieces. The first is a floor mosaic of a guard dog. The second is the contorted cast of a dog, chained and unable to escape its fate. 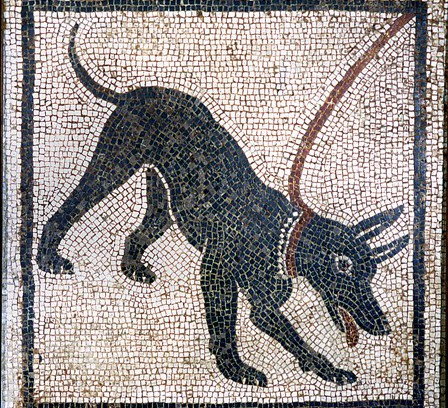 The next room is fraught with emotion. Here, under dim lights, lay the casts of citizens that perished that day in 79 AD. Pyroclastic surges of super heated pumice, ash and gas covered the victims. Over time, as the bodies decayed they left hollows in the hardened ash. Plaster poured into these cavities took the form of the bodies. All of the casts instill uneasiness in the viewer, but those of the children are particularly heart rendering; my gaze going back and forth between the form of a lone child and that of a mother and her child. Beyond the landscape of bodies, a video filmed by aerial drone shows the desolate streets and ruins of Pompeii. 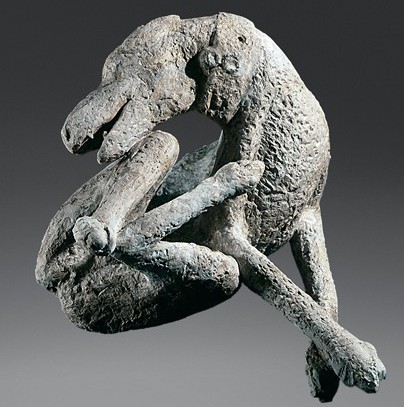 In a small room to one side, the black and white footage of Vesuvius’ 1944 eruption plays. Just beyond, in a mini theatre set-up, two short reconstruction films play on a loop. One takes you on a virtual tour of the pre-eruption city and the other follows the eruption’s devastating timeline.

The exhibit, running until September 5th, 2016, is eye-opening, informative, sorrowful and touching.

Parents please be advised: Some parts of the exhibit may not be suitable for some children. While the layout allows for the “gabinetto segreto” room (containing overt sexual imagery) to be easily avoided, it is slightly more difficult to circumnavigate the dog and human body cast rooms.

Family resources: The audio guide includes a family track designed especially for children and a special Carpe Diem Family Zone (located to the exit of the exhibit) invites families to take part in art workshops and other Pompeii related activities. 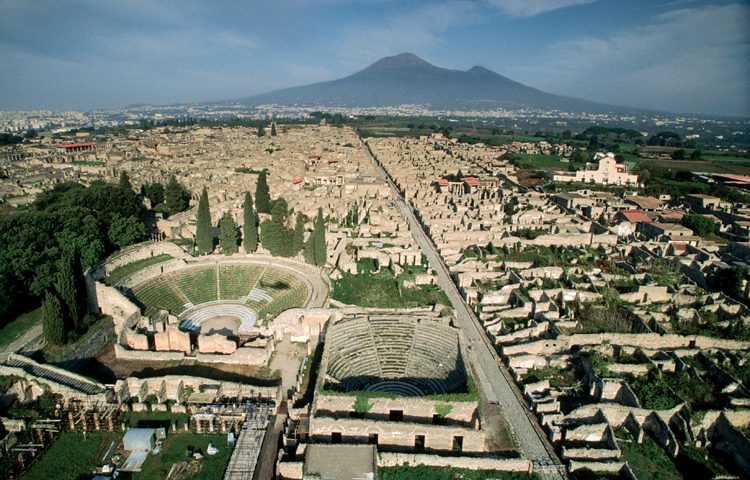 Aerial view of the ruins of Pompeii with Mont Vesuvius on the horizon
Credit: Photo © Roger Ressmeyer / CORBIS