There’s a reason San Antonio is only the second city in North America to be named a “Creative City of Gastronomy” by UNESCO. Tuscon, Arizona, was the first.

Chef Stéphane Leopoldo, from Paris, France, and new to the Hotel Emma in San Antonio, is one of many reasons for the exceptional UNESCO designation.  San Antonio’s rich culinary heritage offers a confluence of many cultures: Mexican, Spanish, German, French and American (of course). 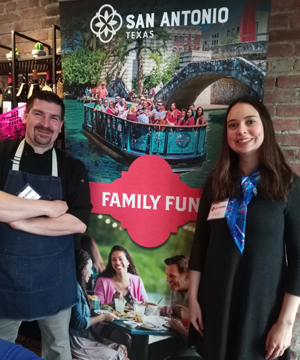 Chef Leopoldo and our group prepared a brunch together – a San Antonio Croissant; (a “Torta” filled with a mixture of tomatoes, onions, peppers, cilantro and lime, topped with sliced avocado and a poached egg). This is served with a “Pan Dulce Kraquelin”; (an orange and lemon flavoured sweet roll); and a fresh banana and apple salad topped with “Dulce de Leche Yogurt”.  This is one of the Hotel Emma’s specialty dishes from their Brunch menu.

San Antonio is more than a culinary destination; it’s also a cultural, artistic and entertainment center. Remember the Alamo, the Spanish colonial history, and the fact that San Antonio was once Mexican territory. Every April, an 11 day “Fiesta” honors heroes of the Alamo with river and street parades. In late October, “Dia de los Muertos de San Antonio” is both a somber and celebratory event. Colourful altars are set up throughout the city and in many hotels. On Sundays, a “Mariachi Mass” pairs Catholic traditions with Mexican music.

Long hailed as the home of Pearl Beer, this former Brewery from the 1800’s has been reimagined as part of development along the 24 kilometer San Antonio River Walk. The River Walk is home to the Hotel Emma, local boutiques, and the Saturday/Sunday Pearl Farmers Market.  It’s a favourite city park and network of walkways where to enjoy biking, birdwatching and kayaking on the San Antonio River.

If you’re travelling with children, or are young-at-heart, there’s the 520 acre San Antonio Zoo & Aquarium. The Family Adventure Garden, with 15 adventure-themed areas that encourage nature play and discovery, was added to at the local Botanical Gardens in 2018.

Lots to attract a visit; wonderful food to savour; and a friendly, relaxed atmosphere for your vacation.