Visiting San Antonio, deep in the heart of south/central Texas, I half expected long-horn cattle and saloons with swinging doors. What I found was a city where the blending of Texan and Mexican cultures is much more than a tasty dish. The seventh largest city in the United States, San Antonio is a city of world class museums, festivals and restaurants drawing about 34 million visitors each year.

Remember to visit The Alamo

Visiting the Alamo was a top priority on my San Antonio itinerary. And a little rain… or a disheartening, unrelenting downpour was not going to stop me. To clarify, San Antonio is known for sunny skies 300+ days a year. Landing at the airport, the weather was warm and the setting sun showed off a clear sky. Under the cover of night things changed. By breakfast a steady, substantial rain was descending. And for the next few days, laden grey clouds poured out their burden and blocked out any traces of the sun. So, shielding my camera under my rain jacket, I hastily jumped over puddles, crossed East Houston Street and walked into history.

Through thick, carved wooden doors I enter into what was the mission’s church. Above me is a high barrel-vaulted ceiling, which I soon learn was added long after the site’s most pivotal moments. Surrounding me is a throng of dripping tourists taking in their first few moments within these venerable walls.

The Alamo has a long, complicated history that is indelibly interwoven into the fabric of Texas.  Its story begins in 1724 as Spanish Mission San Antonio de Valero. Its ecclesiastical genesis ultimately gave way to secular needs and over time transitioned to a military outpost, hospital, battle site, warehouse, store and memorial. During these nearly three centuries, the Alamo (and much of which is now the state of Texas) was successively under the rule of Spain, Mexico, an independent Republic of Texas and eventually the United States. Thanks to Michael Marino, a Visitor Services Supervisor and our outstanding Alamo tour guide, this complex history is clearly, captivatingly and passionately explained.

From its storied history, one event defines the Alamo… a 13 day siege and battle for freedom, in the late winter of 1836. Nearly 200 volunteers committed to defending the Alamo against a Mexican army that had them outnumbered ten-to-one. Davy Crockett, famed frontiersman, coon skin hat wearer, and Tennessee congressman was one of the brave few. Early on the morning of March 6th, the Mexican army breached the walls and after a bloody 90 minute battle left no surviving fighters (only the few women and children were spared). Afterwards, the rallying cry for those fighting for an independent Republic of Texas would soon become “Remember the Alamo”. 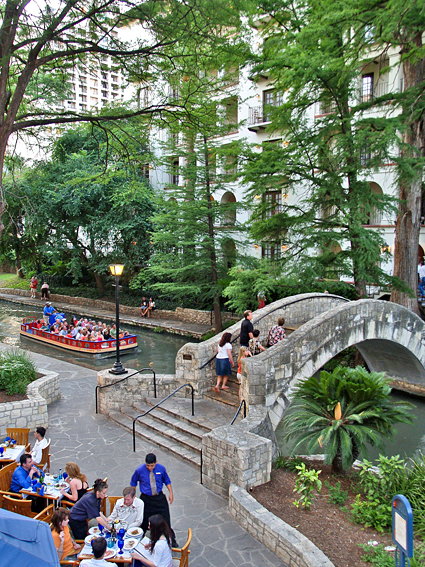 A picturesque stone bridge along the River Walk
Photo: VisitSanAntonio.com

Walking through the church, Michael recounts its formidable history and points out where cannons were mounted on a mound of dirt along the back wall of the then-roofless structure. Across the mission courtyard, in the long barracks we view the artifacts of the battle. While seeing James Bowie’s knife (yes, the Bowie knife was named after him), and the rifles of both the Alamo defenders and the Mexican army, Michael reminds us that blood was shed and men died upon the very stones that we now tread. With so much to see, read and learn in this fascinating historical site, I could stay for hours.

A Walk by the River

Aside from the Alamo, the most recognizable San Antonio site is the River Walk – a narrow, slow flowing and serene waterway, which is lined with walkways on both sides. The path curves and meanders through the city one story below street level. Narrated Rio San Antonio Cruises float along and people explore the multitude of restaurants, bars, hotels and shops under the shade of towering cypress trees. River Walk extensions travel beyond the center of town, as well –  north to the museum area and south to four other Spanish colonial missions – all totaling 15 miles (24km). I enjoyed a great brunch at Ácenar HotMex CoolBar, a multi level, contemporary Mexican restaurant with indoor and outdoor seating, located at the heart of the River Walk. As a grand finale to the meal, a tasty pastel de tres leches or three milk cake with cajeta (a sweet Mexican syrup made of caramelised goat’s milk) was served.

A short walk from the river is the San Antonio Main Plaza – a raised, open square facing the 18th century San Fernando Cathedral. At this plaza crowds gather four nights every week to view a colourful video installation that recounts the history of the city. San Antonio – The Saga is a remarkably well done 24-minute show, with music and accompanying images projected onto the Cathedral’s 7000 square foot façade. 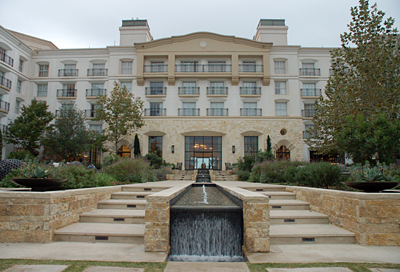 A Home in the Hills

La Cantera Resort and Spa, located in the northwestern section of San Antonio, is about 25 minutes from the Main Plaza. Here, perched on a limestone prominence in the Texas Hill Country, is my San Antonio home-away-from-home. 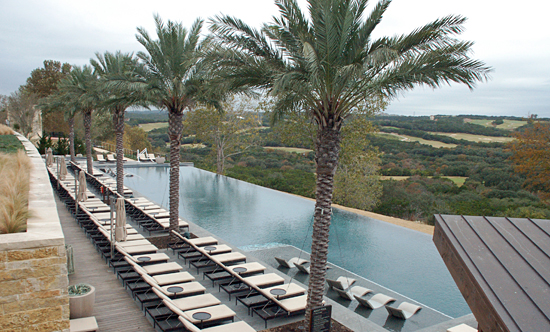 La Cantera set out to create a resort that exudes a relaxed sophistication and I believe they have. From the bright expansive lobby, with its soaring decorative wood beam ceiling, to the rocking chairs overlooking the step platform layout of the Plaza San Saba, the atmosphere is refined but never stuffy. This 498 well-appointed room resort features five tempting outdoor pools: for the adults there’s an infinity pool that looks out over rolling hills, and for the children a pool with two slides and mini geysers. Golfers will be delighted with 2 world-class golf courses. For a drink, the dark wood and leather Sire bar in the lobby is a welcoming spot to raise your glass.

Admittedly, I am not a foodie. Luckily, you don’t need to know anything about good food to enjoy it. And I thoroughly enjoyed dining at two of the resorts best establishments.

SweetFire Kitchen, with its open wood-fired oven, offers delectable American cuisine. At dinner I had mouth-watering roasted tenderloin of beef, cooked with wild mushrooms and red wine, and a tender seared sea bass that must have been 3 inches thick. For dessert: a warm sticky toffee pudding that should be declared a national treasure. 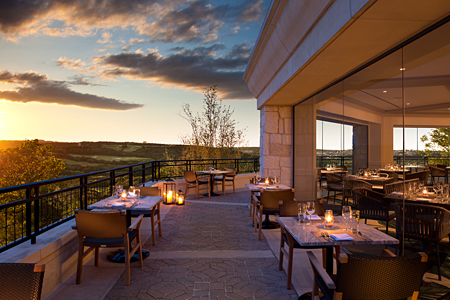 La Cantera’s newest restaurant is Signature by Chef Andrew Weissman, a four-time James Beard Award finalist and San Antonio native. This freestanding restaurant and bar is top-notch dining without any pretention. The taste of fresh from the oven peppercorn bread is accompanied by the calming sound of a crackling fireplace just to my right. Along the left wall, a series of glass doors lead out to a fountain on the patio. Behind me, the bar and entrance lounge feature forged metal work, eclectic antiques, and vintage-styled Edison lights. In front, the open kitchen is framed with wood beams and a fringe of shiny copper pots. The menu, dependant on utilising only the freshest ingredients, is likely to always be in a state of flux, but you can expect to find charcuterie, quail, pheasant, beef sirloin, venison and artisanal cheeses. My favourite is a scallop and cauliflower dish, dusted with cocoa, and placed on a thin layer of “raked” mashed potatoes – like a tiny, delicious zen garden. For dessert I recommend the tropical fruit mille feuile, with passion fruit and a ginger-lime gelee. 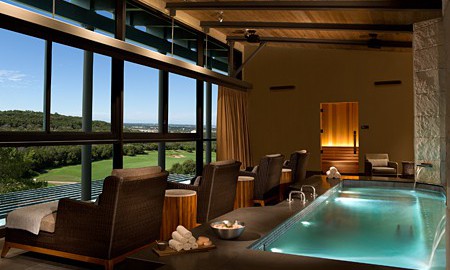 The newly opened Loma de Vida (Hill of Life) spa is another good reason to make La Cantera Resort your San Antonio base. This 25 000 square foot sanctuary offers indoor and outdoor treatment areas, an intimate saline grotto pool, 3 private garden cabanas, its own infinity pool, and two sky lofts. “Some people come for luxury and pampering. Some come to heal. Some come to socialize. Our goal is to meet people where they are and cultivate an experience unique to their needs. …whether it’s for an hour or a few days,” says Maggy Dunphy, Executive Director of Spa and Wellness for Destination Hotels and La Cantera Resort. One of the ways to customize your spa experience is with a choice of traditional spa robe or a two-piece pyjama style lounge outfit. With only a little time to enjoy at the spa, I headed directly to the small heated pool in the solarium. After luxuriating in the warm water, I dried off in the adjacent sauna – sitting alongside its pink Himalayan salt wall. 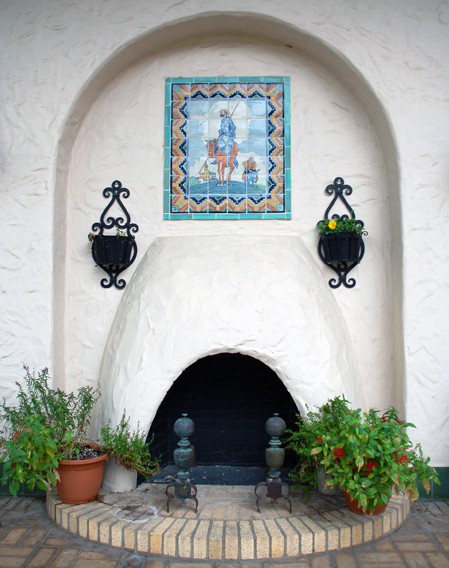 A House of Art

Located just north of downtown, the McNay Art Museum was the first museum of modern art in Texas. The core of the museum is a 24-room Spanish Colonial Revival house that belonged to Ohio-born heiress Marion Koogler McNay. In 1927, she began collecting art with her purchase of a modern oil painting by Diego Rivera, Delfina Flores. At the time of her death, in 1950, her collection had surpassed 700 works of art, much of it 19th and 20th century European and American paintings, along with Southwest art from New Mexico. Since its opening in 1954, the museum has amassed a collection numbering over 20 000 pieces, and added 45 000 square feet of exhibit space.

Works by Vincent van Gogh, Pablo Picasso, Georgia O’Keeffe, and Edward Hopper, along with the sizeable Tobin Collection of Theatre Arts, help draw more than 150 000 visitors each year. Paul Gauguin’s Portrait of the Artist with the Idol and Haymakers Resting by Camille Pissarro caught my eye. The McNay house and expansive grounds should be considered works of art, as well. Double staircases and a stenciled coffered ceiling grace the entrance hall. While tiles depicting Spanish scenes are embedded into the white walls of a large foliage-filled inner courtyard.

How Does Your Garden Grow

The San Antonio Botanical Garden is known for the unique architecture of its Lucile Halsell Conservatory as much as for its flowering inhabitants. The conservatory is comprised of 5 individual semi-subterranean structures. Each building – housing orchids, palm trees, ferns, tropical plants or cacti – has an above ground glass top, measuring 18 to 65 feet high. The 5 exhibit “rooms” are reached by sunken pathways that encircle a sunken open-air courtyard. 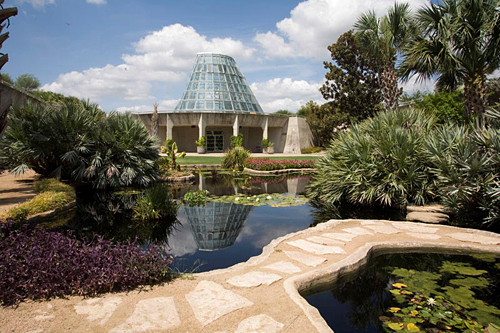 Relocating and reconstructing old buildings seems to be a theme at the San Antonio Botanical Garden. A local carriage house, dating from 1896, was also moved and rebuilt at the garden. Now known as Anne Marie’s Carriage House Bistro, diners opting for a booth are seated in a repurposed horse stall.

A gift from San Antonio’s sister city of Kumamoto, Japan, the small and delightful Kumamoto En garden presents a thoughtfully designed mini highlights-of-Japan tour. Framed in 4 different styles of bamboo fence, the garden is complete with a tea ceremony arbour, pond, stone bridge and nods to Mounts Aso and Fuji.

This year the garden will become an even more wonderful place for families. In the coming months, when its current expansion project is complete, the garden will include a 2.5 acre nature play and learning area known as the Family Adventure Garden.

Three VIVA bus routes are especially useful for tourists: the culture, missions and centro routes stop at the most-visited sites and attractions in the heart of San Antonio. A day pass, with unlimited rides is $2.75. www.VIAinfo.net/VIVA