“I wrote my first song in Grade 12. I played other people’s songs in clubs and coffee houses, and I started integrating my own compositions into my repertoire. I realized that the audience was accepting them alongside the well-known songs I was playing; and that encouraged me to keep on writing.” Gordon Lightfoot would continue to write songs that resonated not only with his generation, but with subsequent generations – providing a musical record of historical events and human emotions.

We’ve listened to his songs throughout our lives; going to school, getting married and starting families, becoming empty nesters and then even grandparents. “I’ve been doing this for 60 years as of this year,” he notes during our conversation. 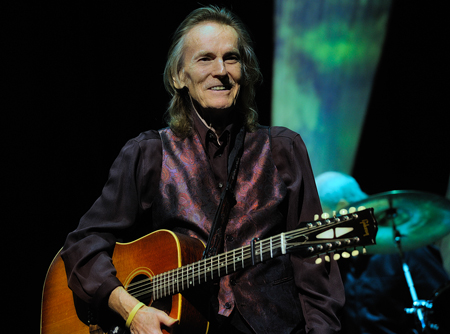 Gordon Lightfoot has “an unbridled
enthusiasm for performing”

At 13, Gordon won a Kiwanis Festival competition in his hometown of Orillia, Ontario. He began singing in the choir in St. Paul’s United Church, where choir-master Ray Williams recognized his singing talent. “He taught me to sing with emotion and to have confidence in my voice.” Gordon also performed on local radio programs and in music festivals, including the Kiwanis Festival. He participated in a competition that brought local winners to Massey Hall in Toronto, where he continues to be a fan favourite. “I play Massey Hall every 18 months, and I’ve performed there 38 times – and it’s always sold out,” he notes with a touch of pride.

After studying jazz composition and orchestration in Los Angeles in the late 1950s, Gordon returned to Canada where he was a regular ensemble singer on Country Hoedown and a regular performer in Toronto coffee houses. I reminded Gordon of a story told to me by Bernie Fiedler, (his long-time friend and concert promoter) about how Bernie ‘negotiated’ for him to come and work at Fiedler’s folk club – The Riverboat. “I was a struggling 24 year old musician with a wife and two young children. So when Bernie offered to double what I was earning, it wasn’t a difficult decision.” (Fiedler had offered to double Gordon’s wages without first asking what they were.) It would prove to be a business relationship and friendship that continues to this day.

Other performers began to take notice of Gordon’s songs. “I was ‘discovered’ by Ian & Sylvia. They recorded For Lovin’ Me and Early Morning Rain”. That brought Gordon into contact with the duo’s manager, Albert Grossman, who also managed Peter Paul & Mary and another up-and-coming singer-songwriter; Bob Dylan.

“It was a great group of people to be with. I was contracted to write and record 5 albums in 5 years.” By 1976 Lightfoot had earned eight gold albums and one platinum album – for Sundown, the title track of which brought him considerable popularity in the United States. The album sold over 1,500,000 copies during its first year of release (1974), replacing If You Could Read My Mind as a favourite of fans and critics and eventually holding a place on both the rock and country music charts.

Gordon’s prodigious output of songs was illustrated by Randy Bachman during a broadcast of his weekly CBC Radio program, Vinyl Tap. “Burton Cummings and I were in the Guess Who, and we had a hit with These Eyes; and we thought we were pretty hot stuff. We went to a club in Montreal and saw this guy perform 3 one-hour sets of incredible songs – all his own. We sat there with our jaws on the table listening to Gordon Lightfoot.” Gordon laughs at Bachman’s reminiscence; “I remember that – I prodded their work ethic and told them to get down to some serious writing.”

“Writing is a solitary process,

and it can be exciting and

draining at the same time.”

I reminded Gordon of a statement he once made about the process of song writing; that it was ‘15% inspiration and 85% perspiration’. “I will stand by that – it’s hard work,” he shouts. “Writing is a solitary process, and it can be exciting and draining at the same time. I wrote songs under contract for 33 years, and now I can relax a little and focus on our performances.”

That 33 year period of song writing has yielded a body of work that has provided “hit song” material for performers ranging from Bob Dylan to Elvis Presley, Barbara Streisand, Johnny Cash, Judy Collins, Harry Belafonte, Roberta Flack and many, many other artists have enjoyed success with Gordon’s songs. Among his personal favourites; Marty Robbins version of Ribbon Of Darkness (“Marty put an edge into that song that I didn’t originally have. I learned more about that one from somebody else.”), Peter Paul and Mary’s recording of That’s What You Get For Lovin’ Me and perhaps surprisingly, Elvis Presley’s rendition of In The Early Morning Rain.

Commenting on Lightfoot’s amazing body of work, his concert promoter Bernie Fiedler once told me; “What makes it so intriguing is that Gordon doesn’t think he’s done anything special!”

Gordon has received 17 Juno Awards and 5 Grammy nominations. He was awarded the Order of Canada in 2003. “I’ll never forget that experience. Pierre and Margaret Trudeau attended, and it was very special to spend some time with them.” Gordon adds with a chuckle; “I remember thinking that I’d better get back to work to show them that I deserve this!” In 2007 Canada Post issued a commemorative stamp, and in typical Lightfoot modesty, Gordon comments; “I thought it was rather nice – they were very polite when they asked me to consider it.”

These days Gordon’s focus is on performing. “I have an unbridled enthusiasm for performing. It’s the communication with the band and the audience that makes it so thrilling.” Gordon is supported by the same musicians that have been with him for decades, in part a testament to his strong sense of friendship and loyalty. Rick Haynes on bass and guitarist Terry Clements have played and recorded with Gordon since the late 1960s. Barry Keane is the only drummer the band has ever had, and keyboard player Mike Keane (the ‘newest’ member) had been with the band since 1981. “None of us is getting any younger – but we’re gonna keep doing this as long as we can,” noted Gordon.

“We play 50 to 60 shows a year, from April through to November. We’re not particularly keen on travelling in the winter months…”

Gordon’s preparation for shows is as meticulous as his writing and recording. “Rick and Terry and I rehearse every Friday afternoon, all year long. When we tour, I’m at the hall where we’re going to play six hours before show time. It takes that much time to make sure my guitars – especially the 12 string – are in tune. Being wooden instruments, it takes time for them to adjust to the temperature and conditions of the hall. It’s pretty well done by the time we do the sound check. It’s worth it to have everything in tune so that we can really enjoy performing the songs.”

Working in bars during the 60’s and 70’s contributed to an unhealthy lifestyle. “When I quit drinking in 1982, it was a welcome change to everyone – I’m really glad I stopped.” Gordon lost weight and to this day maintains a vigorous exercise regime. In 2002 Gordon became critically ill, the result of a ruptured abdominal organ. He was in a coma for an extended period and his doctors confirmed that they nearly lost him on three separate occasions. However, they credit his excellent physical condition for helping him to survive. “It was a tough time – and it took 28 months for me to get back to work.

Gordon Lightfoot will be back at work with his band on Thursday, September 24th at Theatre Maisonneuve. For tickets please call: 514-842-2112 or online: www.laplacedesarts.com