“I don’t think there’s a more proven piece of Canadian theatre,” states Bruce Dinsmore, who will be reprising his role as WWI flying ace Billy Bishop. This Governor General’s Award winning play is one of the most performed plays in Canada. And as Bruce noted during our conversation; “It’s particularly relevant as we approach Remembrance Day.”

Billy Bishop Goes To War was written in 1978 by John Gray and Eric Peterson (Corner Gas and many other popular television shows). It’s a two-person play, and Bruce Dinsmore will play Billy, recounting his stories as the most successful flying ace in wartime combat. The play calls for Bruce to portray seventeen characters. Nick Carpenter takes the role of the pianist – originally performed by the play/musical’s co-creator John Gray.

“I’ve been playing Billy for decades, and I never tire of the role. Every audience is different, but there are always people who connect with the performance – giving us actors that special moment. We’ve toured to different armed forces bases, sometimes packing the whole show into a Hercules aircraft and going as far north as Alert.”

“Billy Bishop is a high-flying ace of a show, capturing the humour, the hellfire and the daring-do of an extraordinary career … The score is filled with vintage replicas of the kind of songs that sent men rushing in–and out–of battle.”
– New York Times 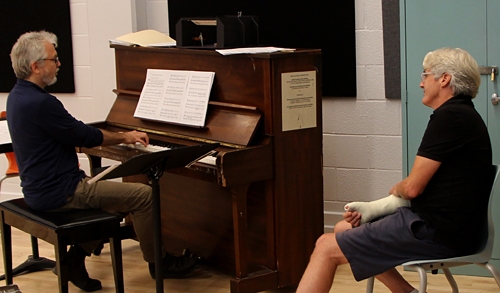 Nick Carpenter at the piano and Bruce Dinsmore practicing

“One of my most special memories was when I performed at Trenton Airbase for Billy Bishop Night, and sitting right there in the front row was Billy’s son – Arthur Bishop. At the end of the play, I stepped off the stage a presented Billy’s medal to Arthur. I don’t think that either one of us were capable of speaking.” It was a truly memorable conclusion to yet another stirring Dinsmore performance.

It’s a role that Bruce has performed so often that when rehearsals started, he said that; “they were mostly off-book;” meaning that he didn’t need the script to remember his lines. Describing his role as Billy, Bruce states; “It’s a piece of me as a performer that’s so ingrained that I can’t wait to get back to performing.

Billy Bishop is the third installment of the Canadian Classics that Artistic Director Dean Fleming has scheduled for Hudson Village Theatre’s professional season. It follows on the superb productions of Drawer Boy and Marion Bridge.

Hudson Village Theatre is located in a re-purposed train station in the village centre at 28 Wharf Road. It’s a lovely, comfortable and intimate performance space. Evening performances are on Thursday, Friday and Saturday. Matinees are on Wednesday, Thursday, Saturday and Sunday. For tickets, please visit the web site: www.villagetheatre.ca or call 450-458-5361. Group rates are available