Pierre R. Brosseau’s earliest exposure to helping others was as a child, growing up in Montreal’s east end. His father had a small grocery store and butcher shop, one of the first under the Metro banner, and Pierre would help to distribute Christmas baskets to families in need.

He went on to earn a law degree from l’Université de Montréal and, after being called to the Quebec Bar in 1971, practiced corporate law and worked in real estate development before turning to the field of broadcasting and communications: Today he is chairman of the board of RNC Media Inc.

As a community volunteer, Pierre’s involvement has always been in the field of health and community service: He was on the board of the research centre at l’Institut de Cardiologie de Montréal in the 1980s, and he remains on the board of La Fondation du CSSS de St-Léonard et St-Michel, a foundation he established to improve the quality of life for residents of long-term care facilities known as Les Centres d’hébergement et de soins de longue durée (CHSLD). He is also the longtime treasurer of the board of La Fondation Jean Lapointe, which raises funds for the fight against addictions.

But it is Pierre’s involvement with the Jewish General Hospital Foundation,
where he is Secretary of the Board of Directors, which has been “my most
important philanthropic initiative,” as he puts it.

He was approached a decade or so ago to get involved with the hospital by the late André Bureau, the former CRTC president who was at the time chairman of the board of the Astral Media group: André told him that 43 per cent of the hospital’s users were francophone and that the foundation was looking for francophone representatives. Pierre said ‘Yes’. 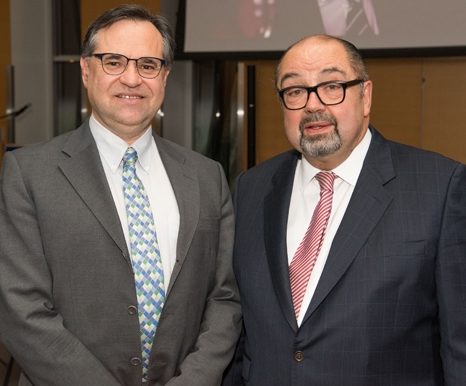 Dr. Karl Weiss, left, Chief of Infectious Diseases at the JGH, and Pierre R. Brosseau, JGH Foundation board of directors

He established a family foundation, the Brosseau Family Foundation, which created a highly successful fundraising event for the foundation known as Le Festin de Babette. The gastronomic supper, which ran every year from 2014 to 2018, raised a total of $2.5 million for basic research into Alzheimer disease led by Dr. Andréa C. LeBlanc, a senior investigator with the Bloomfield Centre for Research in Aging at the hospital’s Lady Davis Institute, a James McGill Professor in McGill University’s Department of Neurology and Neurosurgery and an internationally recognized researcher in Alzheimer disease.

The cause was close to Pierre’s heart: his father suffered from dementia in the last years of his life.

In 2018, hospital foundation professionals helped Pierre to identify another cause for which Le Festin de Babette would fundraise for the next five years: the division of infectious diseases.

At the time, infectious disease was “not a hot subject” and, initially, it was challenging to interest people in supporting it. The first supper was in October of 2019 and “with much more effort” than had been required to raise $500,000 each year to support research into Alzheimer disease; “we got to $400,000,” Pierre recalls.

Timing, of course, is everything.

“The pandemic arrived – and people began to recognize the importance of investing in research to fight infectious diseases,” he says. The hospital, long a leader in the field of infectious diseases and medical microbiology, decided to establish a Centre of Excellence in Infectious Diseases, with a cutting-edge team including several new positions for physicians specializing in microbiology and infectious diseases, nurses, laboratory technologists, infection prevention and control personnel and research staff.

An ambitious $7.5 million fundraising campaign for the new centre was initiated. In the fall of 2020, Pierre and foundation professionals began to solicit donors; they were assisted by former City of Montreal Mayor Denis Coderre, working as an Ambassador for the Foundation.

Nearly $6 million has been raised so far – and donations are still being solicited.

The new centre “will enable us to better understand, prevent and control infections by intensifying clinical and epidemiological research and by evaluating molecular technologies in the laboratory,” says Dr. Karl Weiss, Chief of the Division of Infectious Diseases and head of the new Centre of Excellence.

For him, infectious diseases represent “the most significant challenge for medicine in the 21st century.” Aside from the novel corona virus, diseases causing concern in recent years have included HIV, H1N1, C. Difficile, mad cow disease and Ebola.

Says Pierre: “I think the pandemic has made people aware of the importance of a centre of excellence, with the best researchers. I think excellence should be encouraged and that is why I am helping.

“The family at the JGH, including the Foundation, is something extremely rich in human resources. It has been an exceptional place for me to learn about philanthropy and the many satisfactions it generates.”