Domfoam – 55 years in an evolving industry

The story of Domfoam is also a tale of Saul Pomerantz; a larger-than-life entrepreneur whose legacy lives on in the company he founded. The company that started with that one unique person now employs 300 people in its St. Leonard plant, making everything from foam underlay for carpets to the immensely popular foam mattresses known generically as ‘bed-in-a-box”.

Saul Pomerantz was an ambitious man with an ability to see through to the heart of a business problem and importantly – its solution. John Howard, the General Manager of Domfoam and long-time colleague of Saul’s, told me that while he learned the basic of business administration in university; “I learned how a business makes money from Solly. He taught me things that simply are not part of a business school curriculum.”

John relates the story of Saul’s early business career, because his work as a taxi driver/owner brought him to the foam business. 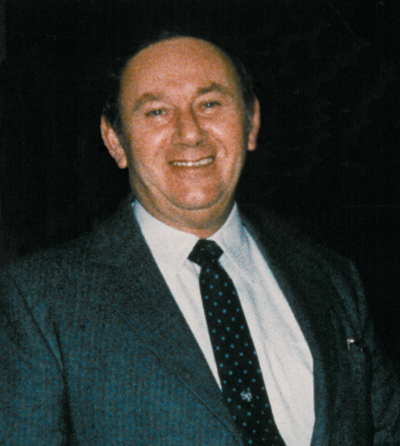 Saul left school after Grade 8, and joined the merchant marine. He then used his savings to purchase a taxi cab and to make a down payment on a taxi license. He worked long hours, often sleeping in his cab so that he could pay off the permit. While most people would have been content with owning their permit and cab, Saul bought another cab and a second permit. Saul reasoned (correctly) that the second permit could be paid twice as fast with money coming in from two taxi cabs instead of one. Similarly, the subsequent third, fourth, fifth and sixth permits were all paid off in less time. “Along the way, Solly decided that with six taxis on the road, it would be a good idea to own a gas station with a mechanic to service the cabs – so he bought a BP station at the edge of Old Montreal.”

One day Saul had a passenger who had a quantity of scrap foam with him, and explained to Saul that the scraps could be bonded together to create an underlay for wall-to-wall carpet, which was enormously popular at that time. Saul’s entrepreneurial instinct went into overdrive. The idea of acquiring scrap foam for a very low cost and transforming it into a marketable product captured the young entrepreneur’s imagination. He also found another use; that he could shred scrap foam, and that pillow manufacturers would buy it. He rented a back-alley garage on Kamouraska Street, and started mixing up batches of scrap foam, using an old bathtub as a mold to make carpet underlay.

Still actively working at Domfoam after fifty-five years, Terry Wright lived across the street from Saul’s Kamouraska Street garage, and recounts his role in the early days of Domfoam; “I’d be sitting on the porch watching this guy working in the garage, and he’d ask me to come over to help him. He’d slip me five dollars to help him out. When money was tight – well I guess I just worked as a volunteer! But whenever Solly had money, he always paid me and my friend to help out.” During our research into this article, we discovered that Terry had actually started working for Domfoam before it was even incorporated as a company. So while the company is celebrating its 55th Anniversary, Terry’s involvement pre-dates the company’s incorporation. 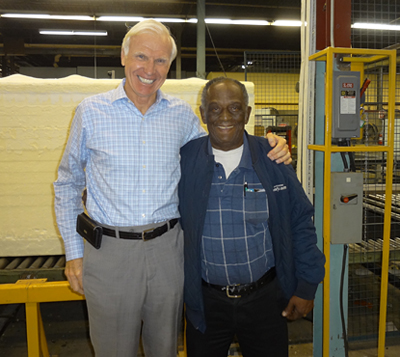 The business grew out of the garage, and moved to a larger building on St. Ambroise. A third move was to a much larger space in the Dominion Oilcloth building on Parthenais Street. Notes Terry Wright; “We became a real business when we moved to Parthenais Street – by then we were on our way.” Terry was involved in the “all hands on deck” approach to the construction of the original building on Lacordaire in 1974; and the subsequent expansions. “There isn’t a concrete block in this building that I don’t know! When we tried something new, we’d keep at it until we got it right. We made it work!”

In addition to making foam carpet underlay, John Howard adds; “We started finding different uses for foam. Furniture manufacturers started using foam as an alternative to traditional fillers. We also manufacture a type of harder foam that is used in seats for school buses.”

Continuing, John states; “Like a lot of industries, the space program created new product demands, which in turn created new consumer products. For example, the seats in the space capsules needed a particular type of foam that would mold to the shape of the astronauts’ bodies, to prevent the development of pressure points during the tremendous G-forces they experienced during takeoff. The industry devised a type of resilient foam that would fit the contours of the body, and that product would come to be known as ‘memory foam’. If it was good enough for astronauts, why not try it out for people sleeping.” However, it would be another two decades before the current ‘bed-in-a-box’ became a huge new business opportunity for foam manufacturers, including Domfoam.

As the business grew, Saul recognized that he would have to expand again; and that for the scope he imagined – he’d need to arrange financing. General Foam in the US was one of the biggest manufacturers; Saul wanted to use them as a model for Domfoam in Montreal. “Solly chartered a plane and took a group of executives from the Laurentian Bank for a tour of the General Foam plant in South Carolina. He wanted them to see first-hand what he wanted to replicate in Montreal.” The bankers were excited by the market for foam, and especially the business acumen of Saul Pomerantz.

“With the backing of Laurentian, Saul built the first 120,000 sq. ft. facility in 1971. He added another 30,000 sq. ft. in 1974. By then – the company was growing rapidly. I was happily working at Dominion Bridge as an engineer, when Fred Hoskin, a friend of mine called to tell me about his work at Domfoam; and suggested that I come up to St. Leonard to see what was going on. One Friday after work, I had a tour of the plant, and met Solly. He called me early the following week and said that he wanted me to come and work for him – saying that he needed a General Manager to help run the rapidly growing company. Well, I’ve been here since August, 1974.”

When asked about new products and uses for foam, John explained that the manufacturers relied heavily on the chemical industry to develop new uses for foam and to continuously improve the safety of the industry’s products. “For example, foam mattresses are made up of three or four different types of foam, each layer having a function. The top layer is designed to mold to the contours of the body, providing continuous support and eliminating the pressure points that develop with a traditional mattress. The next layer will be firmer, providing a kind of platform for the top layer. Side ‘rails’ hold the shape and prevent the mattress from compressing when you sit on the side of the bed.”

Founded in 1971 by Saul Pomerantz in a vacant garage,
Domfoam now employs 300 people in its St-Leonard plant

Since the manufacture of foam is a chemical process, the chemistry lab is a key department in a foam plant.  The company started with one tank for chemicals, grew to seven as production and varieties of foam increased, and now Domfoam uses twenty-five tanks to keep the foam “pouring” every day.

Consequently, the chemistry labs are the heart of a foam factory. Not only to select the correct chemical mix for a batch of foam, but also to ensure quality control during the manufacturing process. Samples and logs are taken and maintained for every batch. The ingredients are fed through a complex system pipes, and the amounts calibrated by computer. The mix literally pours from a trough onto a huge sheet of paper atop a conveyor belt. By the time the foam mixture has travelled twenty feet, it has expanded from a thickness of two inches to a height of four feet. If the chemical formula isn’t right, adjustments have to be made immediately – because as John Howard informed me; “It costs about $1000 per minute to produce foam, so you we have to be able to correct any imperfections immediately and while we’re in the process. Just running from the conveyer belt to the lab can take two or three minutes. The minutes and dollars add up quickly.”

With 46 years of service, Charlie Rzasa is another long-time employee in a company where it appears the lines between the term “employee” and management is blurred, in a positive way. While there are certainly different levels of responsibility and pay scales, there is very much a sense of belonging and camaraderie amongst the people who work at Domfoam.

Charlie states; “I was studying chemistry at Concordia, and a friend told me that Domfoam was looking for another chemist.” After a couple of false starts, Charlie started to work full time. It’s detail-oriented work that also has to be performed quickly. “We take samples of every run to look at the cell structure of the foam. If we see that it’s not right – we have to make the adjustments very fast, because you can’t stop once you’re started a run. In addition to maintaining a consistent mix of the chemicals, we have to take the weather conditions into consideration. For example, a humid day can affect the chemical balance.”   Charlie continues; “And of course we have to keep a record of each batch that we run.”

“We once received a new formula from one of the chemical companies to make a new carpet underlay. I was still pretty new here, and my boss was away. I thought that the formula it was overly complicated – so I simplified it and we did a test run… Well, it worked fine and met all the specifications. I felt pretty good about that! There are many more safety features built into the formulas now, especially relating to the foam being fire retardant.”

In addition to two large buildings, the company maintains its own fleet of transport trucks. “We’re still small enough to be very nimble, and to take on small but profitable custom orders,” states General Manager John Howard. As new products using foam come into the marketplace – we can adapt almost immediately to the specifications and have the customer’s order on its way.”

With 300 people, Domfoam is a significant employer in the Montreal region, and is still a family-run business within the Pomerantz family. That the company continues to thrive after 55 years in a competitive and ever-changing environment is due in large part to the ‘can-do’ attitude originally fostered by the company’s founder. The people like John Howard, Charlie Rzasa and Terry Wright who worked with Saul Pomerantz have continued with his common-sense management style, and dedication to bringing their best efforts every day to the front office, shop floor and shipping docks.

For more information about Domfoam, please visit the company’s website at www.domfoam.com