Julie Liebman was planning to go to the gym. Instead she ended up at the MUHC Birthing Centre.

At 33 weeks pregnant, the first time mother had enjoyed an uneventful pregnancy. But, when she awoke on that September morning, she felt something wasn’t right. Julie immediately went to the hospital’s Birthing Centre.

“I came in thinking I was being cautious and that this was just a detour on my way to exercise,” remembers Julie. “However, when they examined me they discovered that my water had broken and that I was a centimetre and a half dilated.”

Julie was admitted to hospital, though she still believed she would be released and back home that night. After an ultrasound showed that her baby had diminished in size from the previous week’s check-up, Julie was told she would be moving into the Birthing Centre and placed on bed rest for the remainder of her pregnancy. Her husband Marc arrived that night ready for a lengthy stay, carrying her suitcase, chargers for her devices, and even her prenatal vitamins. Neither suspected that their infant daughter would be welcomed into the world in a most dramatic fashion that very night.

Julie, her husband, and her parents were gathered in her room when the monitor recording the baby’s heartbeat broadcast a noticeable slowdown. It took only a moment before Dr. Robert Gagnon, the obstetrician-gynecologist, ran into the room, unhooked the monitor and wheeled her into the operating room.

“I was okay until I saw Dr. Gagnon physically pull the stretcher himself out of the room,” she says. “There was no time to call for transport, so he was the one who was dragging it. That’s when I started to panic.”

Julie and Marc’s daughter Leona was delivered by caesarean nine minutes later. What Julie remembers before slipping out of consciousness from the general anesthetic she was given, was a steady calming voice, one that reassured her she was being cared for by a team of people who knew what to do in this kind of medical emergency.

Julie could not make out who her anesthesiologist was behind his mask, but he was the last voice she heard before going under, and when Julie awoke in the recovery room, anesthesiologist Dr. Thierry Daloze was still there.

“I think he was with me for an hour at least, helping to manage my pain,” Julie explains. “It wasn’t until later that I asked the nurses ‘who was that guy? He was really caring.’” 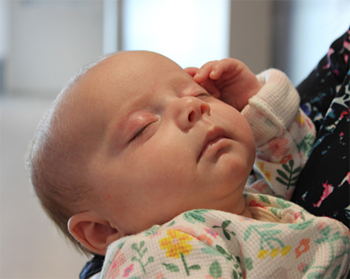 In November, Julie thanked Dr. Daloze by making a Hospital Hero donation in his honour through the McGill University Health Centre Foundation. The MUHC Foundation’s Hospital Hero program connects patients and their families with the staff, physicians, and volunteers who have changed their lives for the better. Hospital Heroes receive a thank you card letting them know a donation was made in their honour along with a special pin that they can wear with pride. When Julie pinned him with the trademark hero pin and introduced him to Leona, Dr. Daloze says he was humbled.

“If I had a positive impact on her life, then I am very happy to hear it,” he says. “I try to be reassuring because I am at home in the operating room, but for patients I know it can be absolutely terrifying. So I just want to tell them that they have a team of experts around them and that we all want a beautiful outcome, which in this case is named baby Leona.”

If you feel someone made a meaningful difference in your care, express your gratitude by making a donation in their honour to the MUHC Foundation’s Hospital Hero program. Your support will go directly towards improving care at the hospital and will inspire our hospital heroes to continue to provide the compassionate and personalized care that you or your loved one received. Visit www.muhcfoundation.com for more information.