Ask any musician. They’ll tell you there are rhythm, movement, and harmonies to be found in most painting. As a jazz and classical musician-composer, what draws me to Graham Fowler’s paintings is the extraordinary musicality of his work. By “musicality” I mean the ways in which small thematic elements of rhythm and sound are repeated in sequences to create a striking development, tension, and release in real time. But how to do this in a static two-dimensional painting without sound requires some real magic from the artist (aka technical skill and vision) and a certain kind of synesthetic imagination from the viewer…

And so it is with Fowler’s exhibition here, twelve works whose extraordinary representations of water encourage us to enter the musicality of painting. How does he do it? Part of the answer lies within the viewer, each of whom will be expert in the sounds of water. Of course we all know only too well the mundane sounds of washing dishes, taking a shower, the flow out of taps, drinking water from a cup, the drip-drip of a leak, and so on. Yes, but expert also in other more exotic and emotionally-charged sounds, like the trickles of spring melt, the summer rainfall, lake waves lapping at shorelines, limpid stream-water moving over pebbles or rocks, the rushing hiss or roar of engorged river torrents. 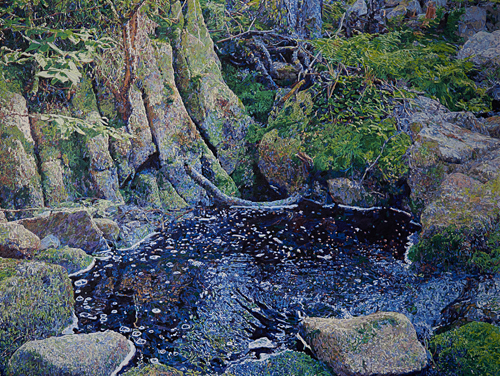 One of the challenges for the artist is how to create different qualities of motion from the smallest dabs of paint, allowing the eye to move outward from the subtle color shifts of tiny rectangles and miniscule ovoid forms to a sense of water movement that can evoke sound through the viewer’s seeing. Fowler’s repertoire of approaches to these challenges is unique and stunning. Look at splashing water, which he has managed so brilliantly in the resplendent and lush “Sweep.”

There is a storyline here: the dynamic fall of water catching golden sunlight in its arc is the centerpiece, drawing the eye down to impact point and then kinetically outward with the exploding motion; but the eye is then drawn upward to a murky origin and then laterally to a mysteriously crowded ground surface seething with organic vibrations. It is hard not to have a synesthetic experience here, a kind of aural hallucination prompted by visual features.

Look at his water channels existing on multiple levels, as in “Stages on a Descending Stream.” The amazing number of tiny forms and color shifts together create the illusion of an almost microscopic water motion, but also – as these tiny elements are made to work together in larger patterns – they guide the slower rhythm of the overall directional flow in this peaceful blue-green world.

Equally challenging is creating senses of depth, showing the surface of water but also what lies beneath and what is reflected by it. As Fowler puts it, “A lot of my paintings are about the surface of the water as there is a complexity of feeling derived from it; it’s a flat surface that reveals that which is above it and that which is below it, while defining its own surface. The complexity of that kind of articulated space fascinated me for formal reasons, on a personal metaphysical level, and as a mantra or a repetitive note in music in which you could lose yourself.”

For me, this exhibition is a joyful expression of “water music.” (If he were alive, George Frideric Handel would likely approve.) With unerring artistic judgment and the sure hand of experience, Fowler uses his remarkably varied water movements to establish the underlying pulse of the paintings. This brings us back to painting as music, and to the inspirational space that blossoms when the painter engages with the musician. In a moment of reflection, Fowler remarks that “Another big influence on my work, when I was young and painting abstractly, but also later when I moved into representational work, was the minimalist music of composers like Terry Riley and early Philip Glass. They would take one chord and repeat it over and over again creating a transcendent meditative quality. I’ve always associated my painting with music that doesn’t have to refer to things outside itself so much as its own repetitive patterns and rhythms, and that can lead you into a meditative state…”

Of course it goes without saying that Fowler’s impressive work doesn’t need the addition of musical accompaniment. It already has its own profound musicality, stimulating the eye and the ear in its playful, brooding, and moving treatments of water. But there is something to be said, too, for collaborative and creative engagement with this fine collection, where the painting becomes the quintessence of the musical score, and the music pays aural homage to the pictorial elements.