NEW YORK – Die-hard Broadway fans have undoubtedly already heard of Feinstein’s/54 Below, Broadway’s premiere Supper Club (https://54below.com). At the peak of Times Square, this fantastic establishment offers performances by the best talent that Broadway has to offer, in a setting quite reminiscent of a speakeasy, where you can enjoy performances in a more relaxed environment, alongside food and drink offerings. 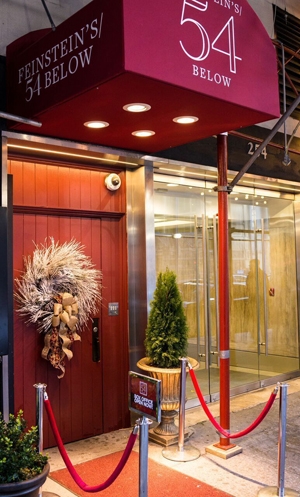 The entrance to Feinstein’s/54 Below.

In June of 2012, the club opened under the name 54 Below. The space underwent a complete reinvention by multiple Tony Award-winning producers Tom Viertel, Marc Routh, Richard Frankel and Steve Baruch (Hairspray, The Producers), who brought together Broadway’s and New York’s most creative artists and designers as well as top food and hospitality professionals. On September 17, 2015, through a creative partnership with Michael Feinstein, 54 Below was renamed Feinstein’s/54 Below.

Feinstein’s/54 Below features up to three shows nightly as well as a late night lounge. Accommodating 134 people in the main dining room, with all tables no more than 24 feet from the stage, the facilities include the capability to broadcast and record audio and video. A quick YouTube search will allow you to witness some of their incredible past productions.

When I went to Feinstein’s/54 Below for the first time, I took in a performance entitled “All Together Now: Celebrating Broadway’s Best Group Numbers”. Music came from a variety of musicals, both old and new, including Company, Bye Bye Birdie, Heathers, and You’re A Good Man, Charlie Brown.

Performers included those known for their work in recent and current productions, including School of Rock, Kinky Boots, Aladdin, Pretty Woman, Frozen, Beetlejuice, Be More Chill, The Phantom of the  Opera, The Book of Mormon, Mean Girls and more.

There are many reasons to travel to New York City, but one most unique to the city’s soul is the extensive list of amazing Broadway musicals found at the heart of Times Square.  One that did not stay long enough, but I had the chance to see, was The Cher Show which closed in August.

We saw it at the Neil Simon Theatre. There is good news. It will be revived on tour starting in Rochester, NY in October 2020. Let’s hope it winds up in Montreal.

Legendary recording artist Cher, born Cherilyn Sarkisian, launched her “Farewell Tour” in 2002 but has continued to perform to this very day. The Cher Show chronicles the evolution of Cher’s career from young elementary school outcast, to half of a comedy duo, to the diva she is known to be today.

Cher’s story is one so complex and empowering that one woman alone cannot tell it—Cher is therefore portrayed by not one but three women who play her at different stages of her life. As the eldest, Star Cher, Stephanie J. Block (Falsettos, The Mystery of Edwin Drood), is an absolute standout. Block, a Broadway veteran, commands the stage with gravitas. It is easy to see why she finally won her first Tony Award for this role earlier this summer. Playing the youngest, Babe Cher, is Micaela Diamond, making an incredible Broadway debut at age 19. Diamond sings and dances her way through the score of Cher classics with ease, making it clear that she will soon become a staple on the Broadway stage. Rounding out the trio is Teal Wicks (Wicked, Finding Neverland), who holds her own as Lady Cher, who many of you grew to love as half of Sonny and Cher.