After pivoting to a take-out and delivery platform for last year’s Montreal en Lumière Festival, the 35 restaurants and 12 hotels part of the 23rd edition February 17 to 27 look forward to welcoming diners in person.

“Gastronomy is at the center of this festival,” affirms General Manager Jacques Primeau. “Last year we asked how we could proceed without (in restaurant dining). We got the answer: creativity!” 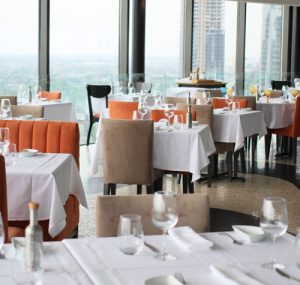 The panoramic view from Portus 369 in downtown Montreal.

I agree with Primeau, because I sampled some of the cuisine last winter via curbside pickup and the selections were highly impressive.

Presented in collaboration with Scotiabank and Scotia Wealth Management, this year’s showcase of Quebec culinary talent is going with the theme Savouring our Northernness.

In order to better explore this theme, it was decided to reserve a place of honor for native gastronomy and its chefs; Lysanne O’Bomsawin, Rich Francis, Sheila Flaherty  Norma Condo, Joseph Shawana, Sean Sherman, Maxime Lizotte, Shawn Adler and the Nk’Mip  Wine Estate.  Marie-Ève Bordeleau, Commissioner for Relations with Indigenous Peoples for the City of Montreal, will serve as spokesperson. 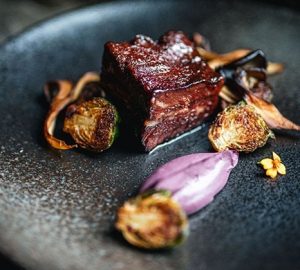 A meat dish from Auberge Saint-Gabriel.

Following up on one of last year’s features, the Duvet and Gastronomy packages are back. The concept is as comforting as it is delicious: thanks to associations between hotel operators and restaurateurs, festival-goers can treat themselves to a unique gastronomic experience in the comfort of their room or in the hotel restaurant if they prefer. Something new this year is the Experience Package: two nights ( Double Tree by Hilton or Hôtel Monville ), gourmet meals and the Pierre Lapointe concert (February 18 at 8 pm at the Théâtre Maisonneuve).

There are other new additions, including From Film to Table activity with Studio Ghibli: a unique collaboration between this festival, the Japanese festival Yatai Mtk and the Cinéma du Parc. During the festival, the cinema will screen six Studio Ghibli films and a dozen Japanese restaurants in Montreal will add to their menu an emblematic dish taken from one of these feature presentations.

For more details go to www.montrealenlumiere.com

Mike Cohen can be reached at [email protected]. Follow his dining experiences as well at www.MtlRestopRap.com