The Maine coast is the closest seashore to Montreal, and for more than a century Montrealers have flocked there in summer to enjoy beaches, dunes and seafood fresh out of the Atlantic. A favourite spot is Goose Rocks Beach, a few miles north of Kennebunkport. Its adjoining crescent-shaped beaches in front of a high-end cottage community, Goose Rocks is a quiet retreat from the nearby, busy “Port”. 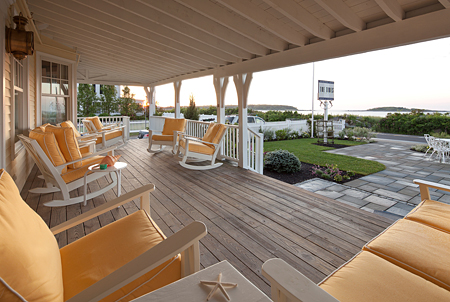 Enjoy a second cup or evening cocktail on the porch

Nestled into the beachfront is Tides Beach Club. The former Tides Inn By The Sea, this 118-year-old property has welcomed generations of guests who prefer hotel convenience and comfort amid Goose Rocks’ homes. After an extensive renovation in 2011, the rechristened inn became part of the Kennebunk Resort Collection, a group of eight area hotels and resorts that offer casual coastal luxury and fine dining.

Those who have driven along the Goose Rocks oceanfront before will recognize the yellow-shake-sided inn with its iconic gambrel-roof, as always. The familiarity continues as you climb the front steps on to the verandah. Inside, though, you are greeted by an inviting bright, open space filed with comfortable sofas and armchairs. A key element of the renovation was to open up the main floor;  merging the lounge, dining room and bar. The reception desk, purposely, seems an afterthought, ticked away at the back. Essentially you walk into a giant living room and the effect is: you’re home. 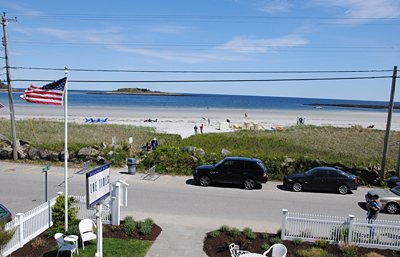 Originally opened in 1899 as the New Belvidere House, grande dame of Goose Rocks has hosted the likes of Theodore Roosevelt and Sir Arthur Conan Doyle. More recently, baby boomers will remember it as Allen’s By the Sea, until it was renamed Tides Inn-by-the-Sea in the 1980s when Marie Henricksen acquired the property and operated it with a “laid back bordering on inefficiency” philosophy.

Today, Tides Beach Club’s laid-back ambience prevails, adding in efficient flair and luxury. It appeals to everyone from former Allen’s guests to first-time visitors in search of elite resort touches. Nowhere is the latter more evident than in the guestrooms, all of which have well-appointed private bathrooms (as opposed to former bath-down-the-hall format). The marquee accommodations are two ocean-front suites decorated by Jonathan Adler, known for its “modern American glamor” style. These feature a king bed with 400-thread-count sheets, separate sitting area, wet bar, marble bathroom with a glass-enclosed shower and rainfall showerhead, and a private oceanfront deck. 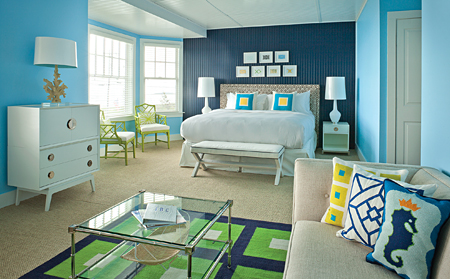 All of Tides’ 21 rooms offer Frette linens, bathrobes, L’Occitaine bath amenities and flat screen televisions and air conditioning. Apart from the traditional ambience, the other trait the property shares with its predecessors is seasonal operation. It is hard to believe such a fundamentally comfortable and luxurious place shuts down from November through April, with even the water turned off, just like a summer cottage.

Testimony to Tides Beach Club’s adherence to its heritage is its position in the community is its appeal to the community. Its bar and restaurant routinely attracts local residents for a pre-dinner drink – and many opt to stay on for dinner. For good reason – Tides’ bartenders are among the area’s best, and its cuisine outstanding, offering classic New England cooking with a contemporary flair from chef John Shaw, a Kennebunk native who also oversees the kitchen at The Burleigh, a new restaurant at sister property Kennebunkport Inn. In winter, Shaw heads west to the kitchen at Four Points Resort in Steamboat Springs., Colorado. 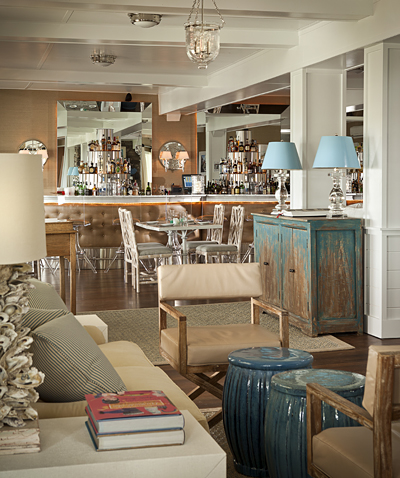 Chef Shaw’s Tides Beach Club specialities include Buffalo shrimp, roasted corn & clam chowder, and Maine lobster ravioli. His emphasis is on local-sourced ingredients, including nearby farm produce. And, of course, locally caught seafood. “My father, uncle, and grandfather fished out of Reid’s Boat Yard in Kennebunkport, so the menu will showcase seafood favorites such as a family clam chowder recipe tweaked to reflect my personal touch,” Shaw says. 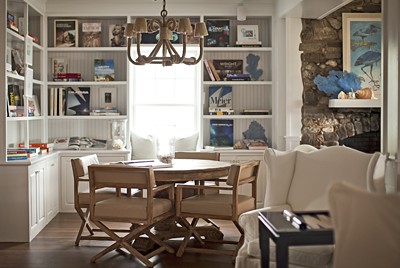 On Thursdays in autumn, “throwback menus” serve up specialties from the inn’s past, such as Lobster Newburg, Supper Club Meat Loaf and prime rib with horseradish. This table d’hôte will set you back just $35, with an optional wine pairing at $25 per person.

While dining tables are mostly opposite the long bar and in the adjacent sunporch, you can be served virtually anywhere in the lobby lounge space – another aspect of the inn’s down-home approach. 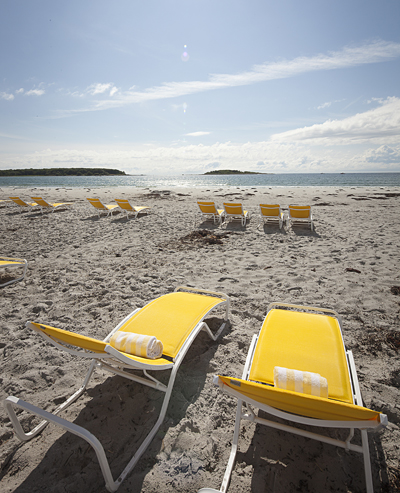 The Tides room rate includes a full Maine breakfast, and use of the inn’s bicycles, as well lounge chairs, umbrellas and food-and-beverage service across the road on the beach. There’s also a free shuttle service to nearby Hidden Pond, another Kennebunk Resort Collection property, where Tides guests have access to a swimming pool, hot tub, spa and wellness center, as well as Earth, a “farm-to-fork” restaurant nestled in the forest.

The Kennebunkport area promises a classic summer seaside experience – but the secret is late August and early September offer the Maine coast at its best. It’s less busy, room rates come down, the weather can be perfect, and the ocean temperature is less frigid.

Travel Planner: How to get there

Crawford Notch: The is the most direct route. Take A-10 east past Magog, then exit 121 on to A-55 south to the U.S. border at Derby Line, VT. Here you pick up I-91 south past St. Johnsbury, where you take exit 19 on to I-93 south past Littleton, then take exit 40 on to U.S. 302 east through Bethlehem on to Bretton Woods and down through Crawford Notch. Once through the White Mountains, a good lunch stop is North Conway. Then continue on U.S. 302 in the direction of Portland. Before Portland, take I-95 (the Maine Turnpike toll road) south to exit 25 at Kennebunk. Then follow state highway 35 east to Kennenbunkport.

Franconia Notch: Follow the above directions, except instead of exiting on to U.S 302 east at Littleton, stay on I-93 south through Franconia Notch. At the south end of Franconia Notch is Lincoln, a good lunch stop, before you decide on which of several back-highway combinations to take eastward to the coast. The safest bet is, in Lincoln, to set your GPS to Kennebunkport as your destination and follow its recommended route. This will take you through on one side or the other of picturesque and vast Lake Winnepesaukee, through the seacoast lowlands to Wells or Kennebunk. GPS aside, a good route – albeit in need of a navigation co-pilot – is exit 25 off I-93 toward Holderness, then follow routes NH-175, U.S. 3, NH-25 and NH-171 to Ossipee, NH; NH-16 south to Wakefield; then Maine state highway 109 through Sanford, ME, and finally ME-99 to Kennebunk and Kennebunkport.

The freeway alternative: This route is no slouch in the scenery department either, following the valleys of Vermont and New Hampshire. Somewhat longer in distance than the mountain routes, follow A-10 east to exit 22 and south on Route 133 to the U.S. border at Highgate Springs, VT. Follow Interstate 89 past Burlington all the way across Vermont and New Hampshire to the junction of I-93 near Concord, NH. Follow I-93 south to exit 7 and east on NH-101 (a freeway despite its number). NH-101 ends at I-95; take 95 north to exit 25 at Kennebunk, then ME-35 east to Kennebunkport.

From Kennebunkport’s Dock Square, follow highway 9 north for 7.4 kilometres, then turn right at “the clock farm” on to Dyke Road for one a kilometre. Bear left on to Kings Highway, which parallels Goose Rocks Beach. Tides Beach Club is about half a kilometre on your left.