Peter Morentzos, one of Montreal’s most successful restaurateurs is proud of his Queue de Cheval Steakhouse & Angry Lobster Seafood Lounge

There are not too many restaurateurs with a high-end and loyal clientele who can completely shut operations down for the better part of two years, reopen in new premises and gain everyone back, and more. Then again, Peter Morentzos is not your average businessman. 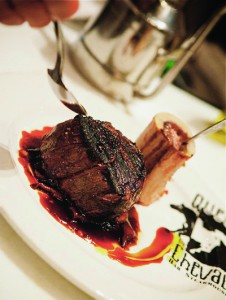 La Queue de Cheval Steakhouse & Angry Lobster Seafood Lounge resumed operations in September 2014 in an exquisite three-level building at 1181 rue de la Montagne and in no time at all Morentzos was back on top of his game. Many people wondered what he was thinking when he pulled his Queue de Cheval name and formula from the popular restaurant’s original location, around the corner at 1221 Boulevard René Lévesque on June 30, 2012.

A few days later I remember sitting with him in a shell of the building best known in history as the venue where Jefferson Davis, a 19th century U.S. senator and President of the Confederate States of America during the Civil War, once lived in order to fend off assassination. John Wilkes Booth, an American stage actor who assassinated President Abraham Lincoln, was also a guest here. Morentzos was confident that the “Q” would rise again, better than before. However, a lot of red tape was involved in sorting through a wide array of zoning and permit issues and Morentzos decided not to rush.

The Morentzos Restaurant Group (MRG) had a licensing agreement in place with the company that owned the Boulevard René Lévesque facility. The owners of the land planned to construct a huge building next door, resulting in a couple of years of heavy construction, something that Morentzos felt would affect quality of service. In order to celebrate the “Q’s” 15th anniversary he opened a temporary location at the Club 1234 Nightclub on the same street and then put everything on hold to work on the brand new facility.

Attempts to make believers of the dining public that the “Q” was alive and well at 1221 Boulevard René–Lévesque under the name Douze Vingt-et-un Steakhouse & Cigar Bar did not work. That locale was eventually shut down and revived as the Montreal locale for the Canadian Biermarkt chain. 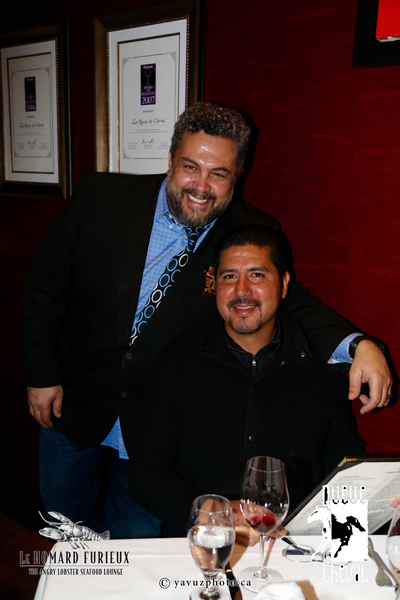 Morentzos began to whet the appetites of his clients in the summer of 2014 with the opening of a seasonal back alley burger bar. In September 2014 the reboot of La Queue de Cheval Steakhouse was ready to roll. In the new 300 plus seat locale Morentzos recreated the signature open-exhibition kitchen, glass refrigerated meat lockers, opulent winding staircase, and massive round grill crowned by a dramatic 30 foot brass hood. The USDA prime beef is painstakingly dry-aged in the restaurant’s meat lockers for 30 to 45 days. Downstairs you will find the exquisite Angry Lobster Seafood Lounge.

The new “Q” has three private dining rooms, able to handle 30 to 120 people, and a cocktail area for up to 150 people. A seasonal terrace opened recently.

Dining at the “Q” remains not merely a meal, but an experience. The legendary shellfish platter remains an absolute must for starters from the raw bar: lobster claws, lobster tails, Dungeness crab, shrimp and fresh bay scallops. The “Q” classics are headlined by lobster emerging, 2.5 to 4.5 pounds and de-shelled and other choices from drunken beef, rack of lamb chops, Mediterranean sea bass, yellow fin tuna and B.C. king salmon.

Morentzos managed to bring back 80 percent of his former staff, having spent close to $5 million to turn the dream facility into a reality. The next generation is also part of this story. Morentzos’ sons, Chris and Alex, are learning the business so they can one day step in and take over.

“My sons are with me here; in fact I feel I’m working for them,” Morentzos laughs. “They have been with me from a young age, and have seen, and worked in the backbone of most of the operations we have opened. The natural progression of people coming from the ground up is the best way to grow within any family business, or any business for that matter. I can only give them the tools and the expertise around them to either pick up from that point, or not be interested. It’s always a dream of any father to see the children take the reins of the company and create an even stronger business with their input and theories and ideas. My kids are kind and polite and very respectful, and I hope that they succeed even more than my doings.” 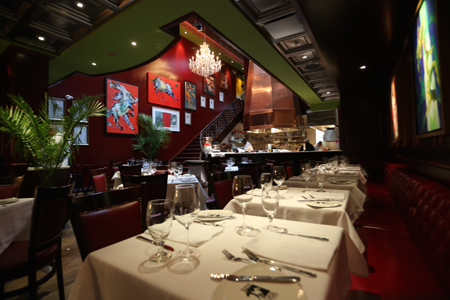 Morentzos is behind the development of more than 50 restaurants, with the Queue de Cheval always serving as the flagship. Others included Moe’s Deli and Bar, Weinstein and Gavino’s and 40 Westt Steakhouse, just to name a few. He is currently in negotiations which might see the Queue de Cheval concept set up shop in Toronto and Miami.

Morentzos had a very humbling beginning to the workforce, selling men’s clothing and delivering pizza. “I always challenged myself,” he says. “Even when times were tough, I worked hard to make my dreams come true. My Greek immigrant parents wanted me to be an architect,” he confides. “So I pursued some studies in that area as a teenager. When I chose to go into the clothing business they were crushed. It was not a pretty sight when I broke the news to them. They went right to church to pray.”

Morentzos’ first job was at a men’s clothing store at the Fairview Shopping Centre in Pointe Claire called Monsieur Moustache. At the age of 19 he became the company’s youngest manager. “I learned a lot there,” he recalls. “I was very artistic so I particularly enjoyed doing the window displays.”

Two years later Morentzos decided he was ready to start his own store. Jopé Uomo opened at the Place Bourassa Shopping Centre and spawned a twin soon after at Place Lacordaire. But due to what he calls “extensive socializing” the business failed and he suddenly found himself unemployed. Now married, Morentzos accepted a job to work at his father-in-law’s East End diner. “My job was to learn how to run the counter, make pizza and do deliveries,” he said. “When I’d come at night, my wife would cry. She felt I had slipped to such a low point by delivering pizza for a living. But I tried to stay positive. If I was going to deliver pizza, then I’d be the best at it. I took to learning the neighbourhood street maps by memory so I could beat the other drivers in deliveries and get the most tips. It kept me going.”

One day Morentzos ran into an old friend who convinced him to try his luck at becoming a waiter. “The guy told me that he was making $1,000 a week waiting tables and that I should try it,” he says. “So we went down to Duluth Street together and he literally pushed me inside this small restaurant called Maison Greque. There was one man in the back of the room peeling potatoes. He turned out to be the owner and I talked my way into a job, even though I had never done this before. He wanted me to start that very night. While I started to panic, my friend sent me to a corner uniform store to buy a black vest. He, in turn, bought 10 bottles of cheap wine and brought me to his house. We practiced opening the bottles and I passed the test. Then he took out all of his good dishes and had me carry them around the house. By the time night arrived my legs were shaking. But it was okay. And I made $105 in tips. I had a new career.” 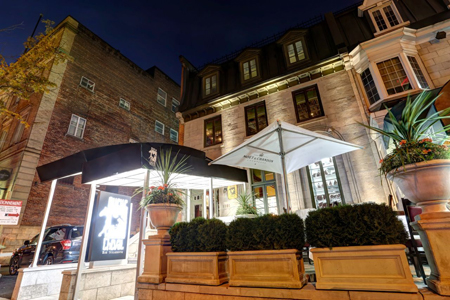 Morentzos spent two years there before setting his sights on the then very trendy Prince Arthur Street. He was hired to work at Cabane Greque, but when he innocently agreed to pose for a photo with a female client the owner fired him for fraternizing with the customers. “It was only my second day there and I did not know what to do,” he says. “I didn’t even tell my wife what happened. Instead, I drove to Laval and St. Martin Blvd where I knew about a restaurant called Casa Greque. I got hired there and one of my colleagues on the job was a guy named George. He would end up becoming my business partner and brother-in-law, marrying my sister.”

During the three years they worked together in Laval, Morentzos constantly told George he wanted to open a restaurant of his own. That finally came to be in 1988 when the first Moe’s Deli and bar, opened in St. Sauveur. That was followed by Bentley’s nearby, Moe’s on the West Island and a series of other projects. Morentzos soon became a specialist at nurturing and developing a unique concept, and then selling it.

That’s what happened with Eggspectations, which delivered breakfast options all-day long. After starting up the first four franchises he sold. Weinstein and Gavino’s revitalized Crescent Street and raked in $7 million in sales its first year. He sold that after two years. As for the 40 Westt Steakhouse; he let that go to his brother-in-law George and brother Lefty.