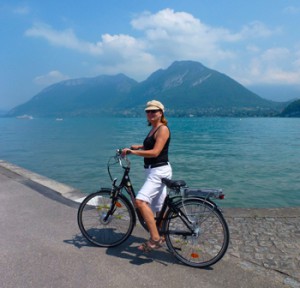 As someone who spends much of her time behind a computer there’s nothing quite as satisfying as being able to boast that I cycled the French Alps. The fact that I’m pedaling an electric bicycle on a mostly flat loop on my way to lunch doesn’t diminish the fun.

Whether you cycle, hike or just take in the view, France’s Rhône-Alpes region offers a wealth of memorable culinary experiences along with its outdoor adventure. And, as I discovered, the departments of Savoie and Haute-Savoie, tucked in the east beside Switzerland and Italy, are blessedly free of the serenity-crushing crowds and scorching summer temperatures of Europe’s better-known destinations. 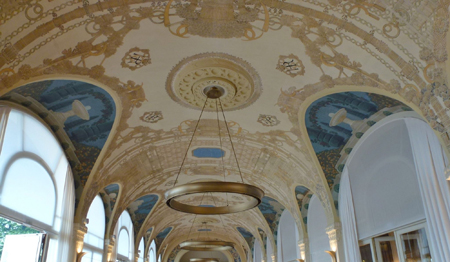 I began my explorations in Évian-les-Bains, a gracious town on the shores of Lac Léman known as Lake Geneva by the Swiss. This spa town has been a popular refuge for royalty, celebrities and literary figures since the discovery of the curative powers of its waters in 1789. Evian water is sourced in the mountains and is naturally filtered through layers of limestone and sand becoming so pure it was once sold only in pharmacies. Today, it’s still possible to sip (and soak in) the healing waters. I stroll the waterfront promenade, stopping to rehydrate with the velvety smooth mineral water at the free public tap in the historic heart of town.

For dinner, it’s time for some glam so I head to Hôtel Royal set amid gardens overlooking the lake. Built in 1905, its Belle Epoque beauty is showcased within Les Fresques brasserie where the pastel ceiling frescoes have been carefully restored to their original splendor by the French National Heritage Department. Chef Patrice Vander’s contemporary French menu shines with fresh local ingredients such as trout, perch and the sublime omble-chevalier (Arctic Char) sourced from the icy depths of Lac Léman. 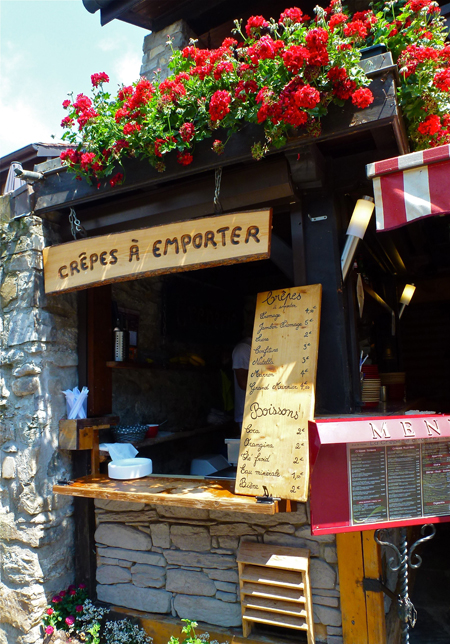 The next morning, a sleek water taxi ferries me to the medieval village of Yvoire. Inhabited since the 14th century, its cobblestone streets, aromatic Garden of Five Senses and cascading flower boxes makes it one of France’s prettiest towns. Judging from the market shops brimming with orange cake, macaroons and fresh crepes, it’s also one of the tastiest. 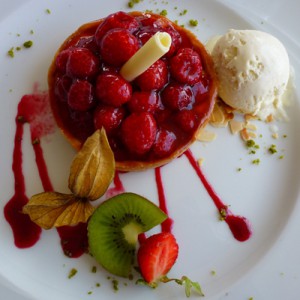 I’m here to learn more about the region’s wines; so stop for a tutored tasting under the shade of a graceful willow tree at water’s edge. The first wine I sample is a Jacquère, one of the most important of the region’s 23 grape varieties. It’s delicate but with a sparkle evoking Alpine wild flowers. Next up is a young Gamay Jongieux that pairs perfectly with my plate of charcuterie and is emblematic of the growing reputation of Savoie wines. While the region’s rugged slopes were once known for producing “ski wines” best suited for drinking after a day on the slopes, they are becoming more refined and growing in popularity internationally.

I continue my wine explorations over lunch at Hotel Du Port a waterfront bistro where the dish of choice is perch fingers splashed with sauce Genevoise, made of wine, fresh herbs, butter, fish stock and cream. It’s accompanied by a glass of Eugene Carrel & Fils Rose, known for its fresh, mineral characteristics and strawberry aroma. 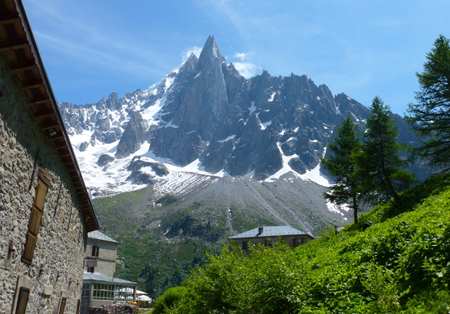 Learn about and explore glaciers at
Montenvers Mer de Glace

Harsh mountain conditions have also shaped the food and wine scene at my next stop, the fashionable ski resort of Chamonix. Known for its mountain fare that’s as robust as its epic landscape, dishes feature berries, wild game and dairy products. Of the 400 varieties of cheese in France, 100 come from the Rhone-Alpes. Summer is when the herds of cows and goats make their way to the high grazing pastures. To sample some of this legendary cheese at its most scenic, I ride the Aiguille du Midi cable car to the historic Grand Hôtel du Montenvers located at the base of the Mer de Glace glacier. Built in 1880, the hotel has a long history of welcoming alpine adventurers and mountaineers. Even icons of the literary world such as Victor Hugo and Mary Shelly found inspiration in its setting and cuisine.

Surrounded by fresh mountain air, I dine on tartiflette, a creamy gratin made of potatoes, onions and lardon oozing with golden Reblochon de Savoie. The first French cheese to receive Appellation d’Origine Protégée (AOP) designation, its origins date back to the 13th century to when farmers reserved a second milking of full fat milk to create a semi-soft, washed-rind and smear-ripened mountain cheese. As I enjoy its nutty flavour and sip genepi, a local aperitif made of herbs, I decide there’s no better place to appreciate mountain fare than overlooking the storybook alpine meadows of the Chamonix Mont-Blanc Valley. 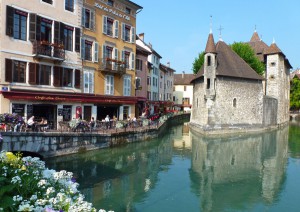 A food-oriented trip wouldn’t be complete without a stop in Annecy, the alpine lake whose shores have been occupied since Neolithic times first by the Romans and then by the Count of Geneva, whose 13th century chateau remains a city landmark. But it’s the winding canals through Old Town that make the town known as “the Little Venice of the Alps.”

After my five-day culinary pilgrimage through the French Alps, it’s time to wear off some calories so I opt to cycle my way to lunch. The bike path meanders through villages such as Duingt with its Neo-Gothic church, towering chateaus and homes in the charming Savoyard style of the 17th and panoramic views of Lake Annecy, Europe’s purest lake. I soon discover that the route is a veritable slideshow of epicurean temptations with artisanal shops and market stalls selling traditional regional specialties such as Tomme de Savoie cheese, rye bread, wild berry tarts, cured country ham, chestnuts and more. 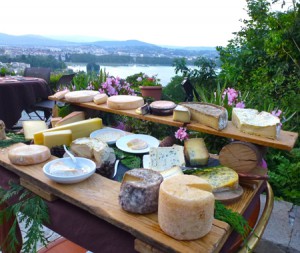 At sunset I browse a perfectly curated cheese table at Le Belvedere, a one Michelin Star restaurant overlooking the mirrored alpine lake, and realize that in the Rhone-Alps, the culinary experiences often soar to heights rivaling its epic mountain peaks.

Transat Holidays offers a large variety of hotels in Annecy, plus packages that include airfare to Lyon, 3 days in Lyon and 4 days in Annecy, plus a car rental. There is a train service from Lyon to Annecy.

Evian-les-Bains: Hôtel Royal will reopen in Summer 2015 after spectacular renovations and the nearby Hilton Evian-les-Bains offers contemporary rooms, fine dining and the Buddha Bar Spa (linked to the avant-garde hotel restaurant in Paris). www.evianresort.com