Author Philippe Cantin chronicles Serge Savard’s rise to the pinnacle of hockey, his business interests, love of family and his integrity 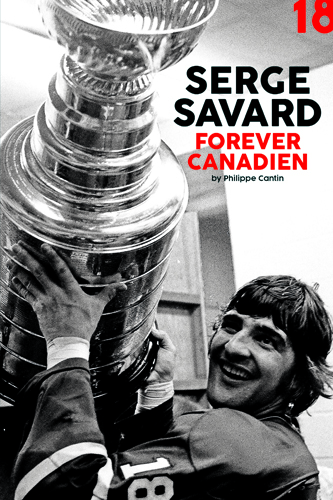 “I remember when I was seven years old in 1953, listening to the Canadiens game on the radio. It was Jean Béliveau’s first game with the team. When I arrived at my first training camp for Les Canadiens, the first guy who shook my hand and welcomed me the NHL was Jean Béliveau. Can you imagine Peter – what that was like? What a thrill that was for a young guy from Landrienne to be welcomed to the team like that? Jean Béliveau played until he was forty, and in our final playoff series, he was the top scorer!”

Serge Savard was part of the Montreal Canadiens organization for thirty-three years, starting in the minor leagues, as a professional player, as Captain, and then a second career as the team’s General Manager. Serge won Stanley Cups as a player and as the team’s GM.

This book chronicles Serge’s early days growing up in Landrienne, a town of 1,000 a little outside of Abitibi. “My father was an amazing man, who built and operated a butter factory, just like my grandfather had done – except he had seven butter factories. My father was community-minded, and he served as the Mayor of Landrienne for 30 years. His advice to me was to ‘Be a good person’. That has been my guiding principal.”

The book begins in Landrienne, where the Savard family and others were literally carving out a town and local economy in Northern Quebec’s near wilderness. Serge was the biggest child in the family, which included two sisters and his brother. At fifteen, Serge was 6’3” and weighed a muscular 200-plus pounds. “Winter was a month longer in Landrienne than in Montreal, and we played hockey before and after school. We didn’t have very good equipment; our goalie used potato sacks stuffed with rags.” 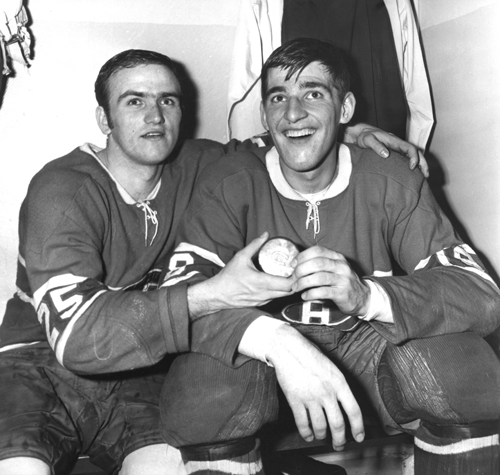 You’ll follow Serge’s hockey journey with The Habs, and his memories of playing alongside Jean Béliveau, Dickie Moore, Henri Richard, Gut Lapointe, Jacques Lemaire, his defensive partner Larry Robinson, and the great Guy Lafleur. “Every kid in Quebec wanted to play for the Canadiens, and I brought that memory with me when I was the team’s General Manager.” Serge shares his immense pride at being selected Captain by his teammates. “That kid from Landrienne being elected to be the Captain of The Montreal Canadiens!”

After retiring from the Canadiens, Serge’s old and close friend John Ferguson coaxed him out of retirement to play for the Winnipeg Jets. With the encouragement of his wife Paulette, Serge moved the family to Winnipeg where his hockey career flourished, and he led his young teammates to a respectable showing dominated by the powerhouse Edmonton Oilers led by Wayne Gretzky.

Back home from the Summit Series in 1972, with Phil Esposito and Mickey Redmond
Photo: ©The Canadian Press MTLP La Presse – Robert Nadon

Serge recounts his experience in the 1972 Summit Series against the high point of his hockey career; not only because of its intensity, but it also gave him an opportunity to play with the best hockey players in the NHL – a ‘dream team’ before the phrase had been coined.

Serge has always maintained a large network of friends inside and out of hockey. A true entrepreneur, he was involved in businesses outside hockey even during his playing days. I learned that he was a fellow Publisher as owner of a weekly South Shore newspaper called L’Image. “We did very well for a few years, and while I didn’t make much money with it, I didn’t lose either when I sold my interest.”

Serge and the The Jets had just been eliminated from the playoffs and the family was waiting for the boys to finish school before heading back to Montreal for the summer, when Ronald Corey called. The President of The Montreal Canadiens wanted Serge to come to Montreal for a meeting. Two weeks after playing for the Winnipeg Jets, Serge Savard was hired as the new General Manager for the storied NHL franchise, The Montreal Canadiens.

I’m not going to recount the contents of Serge’s nearly 500 page book. I can tell you that it’s a fascinating read about a man who remained true to his roots as a Francophone and a proud Canadian citizen. Serge made some mistakes along the way, in his job as General Manager and in his life. They were few, and he freely admits where he missed an opportunity. That said, under his leadership as GM, The Canadiens won the Stanley Cup in 1986 and 1993.

In 2017, Serge was named 1 of the Top 100 players in NHL, with Bobby Orr, Jacques Lemaire and Dave Keon
Photo: ©Courtesy of Marc Savard

Serge takes great pride in his integrity. The French version of Serge’s biography was published a year ago, and he said with pride; “Not one person in all the media ever said; ‘No – it wasn’t like that’. Philippe had saved taped of previous conversations that we had fifteen years ago. He said that he double-checked all the references to our conversations for him to write this book, and he said; “Serge, I’ve checked everything and what you said fifteen years ago hasn’t changed.’ With a chuckle Serge added; “One of the advantages of telling the truth is that you don’t have to remember something you made up.”

Serge Savard – Forever Canadien is published by KO Editions and is distributed by University of Toronto Press. It’s a great read about hockey in the Canadiens glory days, but perhaps more importantly a guide about how to conduct oneself as a decent person. In the words of Laurent Savard; “Be a good person.” For his son Serge, mission accomplished.