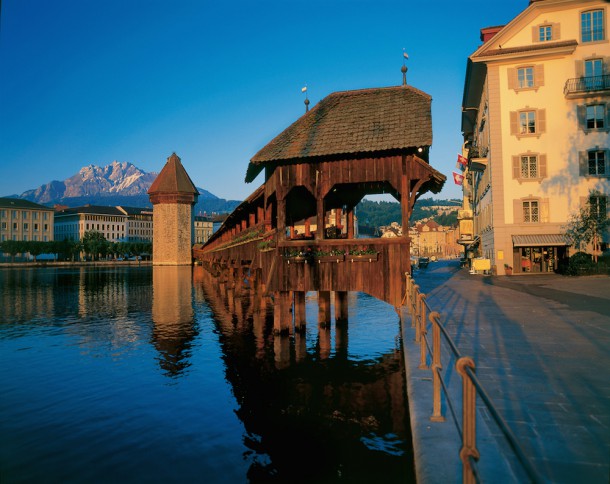 You have to wonder how such a small country—considerably smaller than Nova Scotia—can be so heart-throbbingly beautiful. We’ve all seen pictures of it with its snow-capped mountains, lush green valleys and men in funny outfits blowing music from their iconic six-foot-long alphorns. This is the land of Heidi, edelweiss, cuckoo clocks, Swiss cheese, chocolate and some of the highest peaks in the world. I admit that seeing the country for the first time left me awestruck. Spending eight days exploring various parts of it only heightened my appreciation for its stunning landscape, storybook towns and things to see and do. 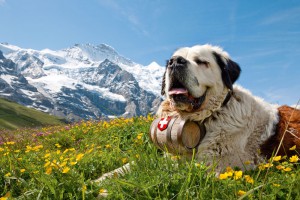 From Zurich to Thun
Arrival at the Zurich Airport offers the first clue to how travel-friendly the country really is. I was told not to leave home without a pre-arranged Swiss Pass that turned out to be the best advice ever. (The Pass seems a little pricey but offers value for every penny). This piece of paper about the size of a five-dollar bill was my ticket to all trains, buses and certain museums. It’s common knowledge that Switzerland has one of the most sophisticated rail systems in the world and to begin with, Zurich Airport is connected to one of the main terminals. Trains come and go in every direction in organized precision. The ride to Thun, in the west-central part of the country, took about 90 minutes and the scenery along the way was outstanding. Endless snow-capped mountains together with hillsides and valleys dotted with Heidi-type wooden houses and grazing animals. It’s a place you instantly fall in love with and although I had never heard of Thun, it turned out to be just the kind of Swiss town I envisioned. 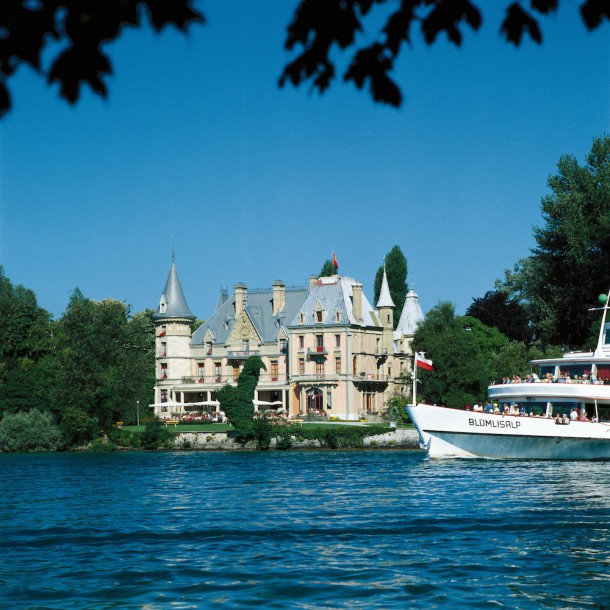 Ringed by mountains and situated on the edge of the Aare River, close to picturesque Lake Thun, this medieval center has an engaging Old Town section and looming over it all is turreted Thun Castle that houses the town’s Museum of History. For castle lovers, this is a perfect place to be. Two other castles for touring are Schloss Schadau and Schloss Oberhofen, both representative of much earlier times in Thun. The former is one of the most architecturally beautiful in Switzerland, while Oberhofen is an elegant lakeside palace where its rooms are furnished in various period styles from medieval times forward. 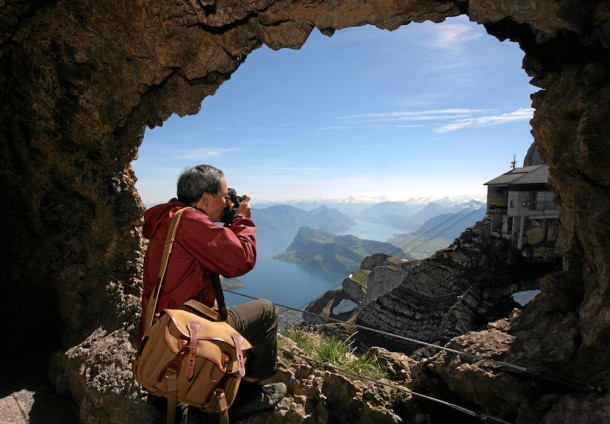 With Thun as a launch point, a series of train connections, including one of the highest and steepest railways in Europe, brought me to my first mountain top experience—Jungfrau, one of the area’s main summits with an elevation of more than 13,000 feet. The final ascent was made on a cogwheel railway that took 16 years to build through solid rock. A large viewing station offers a 360-degree panorama of the region’s alpine peaks and to say the scene is jaw-dropping beautiful is a gross understatement. Indeed, the Jungfrau experience is one of Switzerland’s must-do attractions. 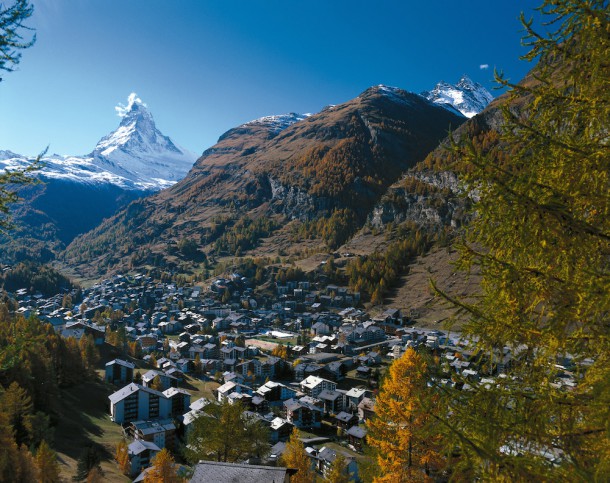 Thun to Zermatt
It’s entirely true that visitors can easily explore Switzerland without ever needing a car. Leaving Thun, a series of trains and buses efficiently transported me to Zermatt, an important southern Swiss village just a few miles north of the border with Italy. Switzerland is surrounded by France, Germany and Italy, a geographic intimacy in which language spills over with French, Italian and Swiss German being spoken in certain areas. For me, this was the high point of my alpine odyssey for one major reason—the Matterhorn, the iconic emblem of Switzerland. This is a tourist town largely founded on the world famous mountain that soars to a height of 14,692 feet. In fact, Zermatt is almost completely surrounded by lofty peaks including Mt. Rosa, highest of the Swiss Alps. However, it is the Matterhorn that takes top billing with every day spent in Zermatt offering awesome views of the mountain that was among the last to be conquered in 1865. 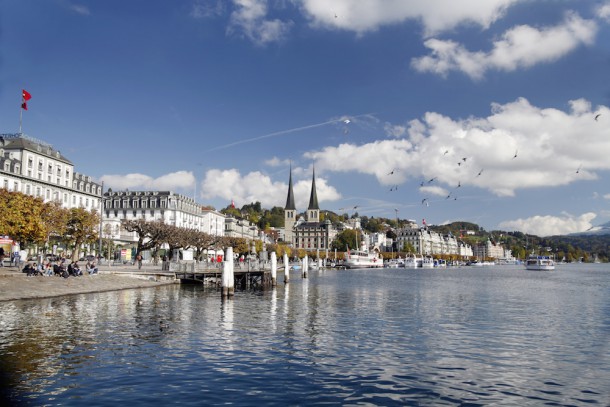 Visitors come well equipped to take oodles of photos of this magnificent rock monolith. Today, cable cars give hikers a head start on mountain climbing and chair lifts accommodate skiers in winter. There are also about 250 miles of walking trails that are lower impact than climbing and a cog railway takes passengers to the Cornergrat summit where there are excellent views of the Matterhorn and mountain glaciers. Zermatt itself is a car-free zone that is compact and easy to get around although there are battery-driven taxis and horse-drawn wagons. There are a slew of hotels, inns, chalets and restaurants to accommodate the legions of tourists the town receives year-round. Things to see include the Matterhorn Museum that contains the equipment used during the first ascent of the mountain that ended tragically with four of the seven climbers being lost to a fall. Overall, however, this is a great outdoors kind of place and a many visitors come specifically to indulge in cycling, biking, walking, hiking and mountain climbing. Sightseeing is a given. 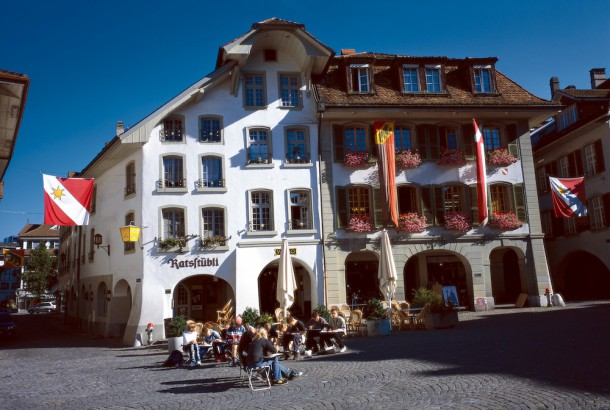 Zermatt to Lucerne
Lucerne is a centuries-old city southwest of Zurich that straddles the Reuss River and empties into lovely Lake Lucerne. One of its most famous landmarks is the wooden Chapel Bridge, a 669-ft. covered bridge across the river that dates back to the 1300s. The city has an Old Town section and parts of its walls and eight watchtowers still remain. This is a vibrant town filled with at least 11 museums including the Richard Wagner Museum where the renowned composer once lived during the 1800s. It’s also a city of culture with theatres, art galleries and music halls.

Dining options are everywhere and shopping in Lucerne is exceptional—which is why I came home with a Swiss-made watch, a Swiss Army knife and more chocolate than I deserve. 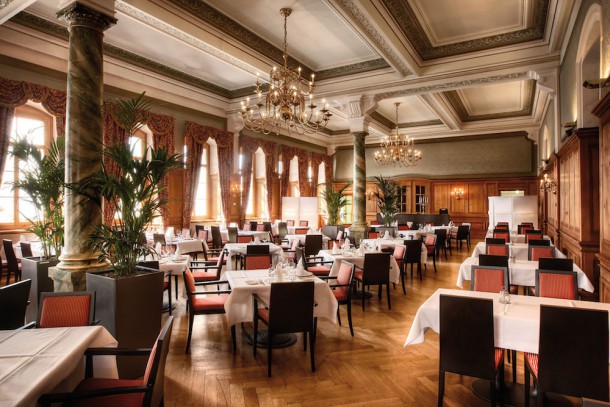 The highlight of the Lucerne visit, however, was the trip to the top of majestic Mount Pilatus aboard the world’s oldest and steepest cogwheel railway. The mountaintop offers 360-degree views of lakes, forest, alpine clusters and the Swiss plateau. The scenic wonder of the place has been endorsed by some of the world’s most famous people. Queen Victoria visited in 1868 before there was railway access. She was transported to the top on mules and stayed for several days at a mountaintop hotel. (The elegant Mt. Pilatus Hotel now names its main dining room after Her Highness). Mark Twain, Richard Wagner and Theodore Roosevelt were also enamoured with the place for its intense beauty and amazing sunsets. While the mountain is relatively steep, it’s entirely possible to hike it in less than a day although the bulk of people use the cogwheel railway up and an aerial gondola for the descent.