Blue Rodeo is arguably one of Canada’s most popular and consistently enduring bands, having released fifteen albums (three recorded live), sold over four million recordings, won eleven JUNO Awards, were inducted into the Canadian Music Hall of Fame and have their own star on the Canadian Walk of Fame. Shortly after forming Blue Rodeo in 1984, the band played its first show at the Rivoli in Toronto. With more than 25 years of recording and touring to their credit; original members Jim Cuddy, Greg Keelor, Bazil Donovan and the four new members will bring their show to Montreal’s Place des Arts on March 2 to close out the Montreal en Lumière winter festival.

Jim Cuddy took me back to the early days, when he and his high school buddy Greg Keelor were just getting started – feeling their way along in the twists and turns of the music business.
“Greg and I hung out together in the same crowd in high school, and started playing music. I went to Queens for a few years, but dropped out to pursue my interest in music. In the early 80s, the club scene in Toronto was weak, and so we went to New York. My wife (girlfriend at the time) was studying theatre arts in New York, so I was there anyhow.”

“We played regularly down there, and we learned a lot about music and also the music business. We followed so many false leads in New York.” While they were frustrating at the time – the tough lessons learned in New York would prove beneficial for Jim and Greg and their future in Blue Rodeo.

“We came back to Toronto in 1984 because the club scene was very strong by then, and there were lots of places to get work.” Continuing Jim adds; “All we wanted to do was play – after our experience in New York, we had no interest in the business side of the music business. We had learned that what gets you noticed is your ability to draw a crowd. So we put the lessons learned in New York to work for us in Toronto. We put up posters everywhere we could to promote our shows. We quickly became the hottest band on Queen Street, and people started to come to us.”
“We played what we wanted to play, and we developed an audience. Because we had developed our own following – we never had to give anything away.”

The band members maintained their day jobs, and played in the Toronto clubs at night. Warner Music signed Blue Rodeo to their first recording contract in 1987. Despite high hopes and expectations, sales for the first album titled Outskirts, were lukewarm, and the record label was having second thoughts. Despite the band’s local popularity, the album was not doing well. And then – the song Try caught the attention of John Martin at Much Music; the then innovative and immensely popular music video television channel.

“That song changed my life” states Cuddy matter-of-factly. “I used to work setting up and moving stage props. Try reached the Top Ten in the local popular music station in Toronto, and I’d hear while I was at work. The other prop guys used to bet on fast the song would fall off the charts, but it stayed there for weeks and weeks.”

“What I didn’t realize at the time was that Try was hitting the Top Ten all across Canada.” Instead of working regularly in Toronto clubs, Blue Rodeo started performing in concert venues across Canada and into the US. “It’s a tribute to Canadian audiences that they bought tickets to our shows and accepted the music that we wrote.”

“We were well into our 30s when this all started to happen – we weren’t impressionable kids. We were comfortable with our lives. I kept my stage prop job until 1990, and by then we had sold over one million records. I was still paying my union dues – just in case the music thing didn’t work out!”

It worked out fine – Blue Rodeo has sold more than four million records, and has won every major music award in Canada. The group has been sought out for musical collaborations by an impressive list of Canadian artists – including; Sarah McLaughlin, The Tragically Hip, Great Big Sea, Jill Barber (a favourite with Montreal audiences), Sarah Harmer and The Cowboy Junkies.
Their peers in the Canadian Music Hall of Fame include Leonard Cohen, Neil Young, Oscar Peterson, Bruce Cockburn, Joni Mitchell and Anne Murray.

It hasn’t always been a smooth ride. Co-founder guitarist, singer and composer Greg Keelor developed painful and debilitating ear problems that threatened his ability to perform. After several unsuccessful experiments, including having Greg sing off-stage to spare him the onstage volume, Jim Cuddy suggested that the band try in-ear monitors and that Greg play acoustic guitar away from the band’s loudest instruments. It’s a solution that has the re-invigorated Keelor once again sharing the vocals with his longtime friend Jim Cuddy.

Cuddy’s distinctive voice and soaring falsetto were affected by years of straining his voice. “For about six years I was having trouble with my voice – having to rest it and figure out ways of singing that wouldn’t put additional strain on my vocal chords. I was finally diagnosed as having a polyp on my vocal chords, and was told that surgery was the best way to fix the problem.” With some trepidation, Jim went ahead with the surgery and it was a success. “I was able to hit notes with clarity and an ease that I hadn’t been able to for years.”

The band recorded its thirteenth studio album In Our Nature at Greg Keelor’s sprawling farmhouse. The band had been playing many of the songs live during an extensive tour, and they had a high comfort level with the songs. Months of performing had the band in top shape musically, and the recording sessions progressed well. Jim notes; “Originally we thought that we’d move the furniture out of the living room and play facing each other – but it turned out to be a much bigger scope than that. So we positioned ourselves around the various rooms in the house and got to work. It was apparent right away that there were some strong ties that were knitting everything together and that it was going to be a good vibe record.” 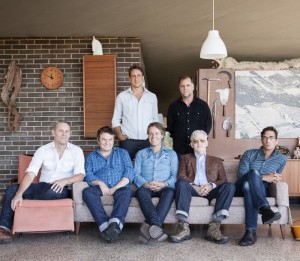 By spreading out throughout the house, band members could control the sound of their individual instruments and still play as a unit. Instead of recording the instruments individually, the band was in fact performing the songs as they recoded – giving freshness not often with current recording techniques. Greg positioned himself in the loft alongside the recording console and played with the band, their sound coming through a small speaker just in front of him.

In effect – In Our Nature was a return to the style of recording decades earlier, when bands actually played the songs they were recording live in the studio, as opposed to layering the individual instruments using computer technology.

The distinctive blend of Jim and Greg’s voices create the unique Blue Rodeo sound. In the early days of performing on Queen Street in Toronto – music critics would often compare Blue Rodeo to other groups to give their readers and listeners a sense of the band’s sound. They’d compare the band to groups such as The Eagles, The Flying Burrito Brothers and The Beatles. Those comparisons haven’t been necessary for decades; as Jim Cuddy, Greg Keelor and the other members of Blue Rodeo continue to write and perform the music that they enjoy. Songs that continue to resonate with their audiences around the world – but especially in Canada where there is a special bond between the seats and Blue Rodeo on stage. 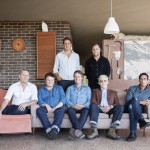 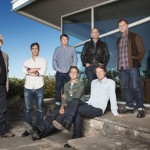 Greg Keelor (far left) and Jim Cuddy (seated at right front) and bassist Bazil Donovan (middle, standing) have been together as Blue Rodeo since they first performed at The Rivoli in 1985