What better fodder for a play than a family at odds. Simply delectable.

Centaur has started the season with a stellar piece of Theatre.

A family that has lived in a creaky old farmhouse for eons and has had difficulty making ends meet living off the land. It is a family with an angry 19 year old searching for the stars, a grandmother trying to please everyone at the risk of her own sanity, her daughter and daughter’s husband who are coming to terms with a marriage that is falling apart, and a matriarch, a crotchety old bag, who probably makes more sense than anyone else in the family. Add to that, a wedding on the horizon and a meeting of all involved on the aforementioned creaky farmhouse verandah.

The play opens to the sounds of country music wafting from within house. At some point, the strains of Will the Circle Be Unbroken reach out and encompass the audience. Is this a hint of things to come?

From the moment the first actor sets foot on stage, you are invited on a trip through family morals, standards of behaviour and the lifestyles of a financially challenged, dowdily-equipped generation and rebellious youth.

Danette MacKay plays ‘Monique’, who is about to be married to ‘André Mathieu’. MacKay is warm, friendly and welcoming to watch on stage.  She is alone for the first little while and has the difficult task of setting up the situation out of which the plot proceeds. Eleanor Noble as ‘Louise’ is a total opposite, with her every move cold and calculating.

Pauline Little, at her zenith in the role of ‘Jeanne’, understands the art of stillness on stage and conveying emotion through use of body. What a wonderfully sensitive performance she gives.

Clare Coulter is magnificent as ‘Paulette’, the one apparently solid person on the farm, who watches chaos swirling around her. She sits crouched in a chair, watching, listening to all, at times pretending to be asleep, ready like a snake to jump in with a comment. She also has the best one liners: She refers to herself as “…an ornery old bird….”. Much to the delight of the audience.

Arielle Palik as ‘Josée’ presents the obstreperous qualities of an unhappy youth. She has tremendous energy and ‘daring-do’ to play over the top, as required by her character. The girl shows talent to burn.

Chip Chuipka as ‘Simon’, the patriarch of the farm, is totally relaxed in a turbulent surround. Chuipka is an actor one can depend upon and enjoy for his true talent and ability to hold it all together with charm and complete reality for the role. He too, adds much needed comic relief to this often heavy-sided tale.

Pier Kohl as ‘André’ is properly wooden and ingratiating, failing at every excuse in his efforts to be the peacemaker. He gets his turn at bat, but will he hit a homerun? 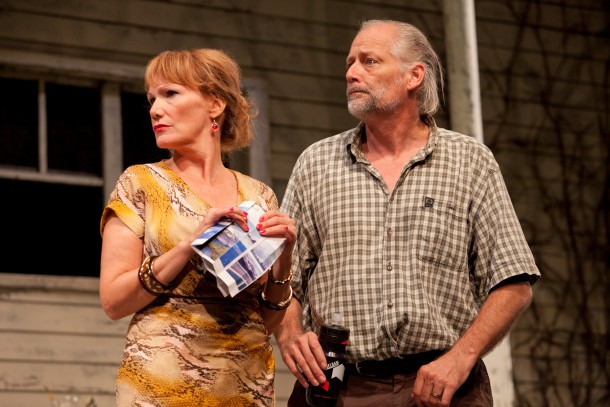 Graham Cuthbertson as ‘Gabriel’, ‘Josée’s’ husband, puts in a fine performance as a patient man in waiting, thwarted at every turn in his pursuit of his wife and his position within the family. A good actor, unwaveringly holding the truth of his character to the bitter end.

August, an afternoon in the country, is adeptly directed by Harry Standjofski, who understands the complexities of family and knows the importance of comic relief in a play full of characters bent on destruction. His pacing of the production comes in great waves of crisp tempo and overlapping line readings that give this wordy play a decisive momentum His handling of an extraordinarily difficult work for a director is exemplary.

The set by James Lavoie is a beautiful reflection of the shattered and tattered family, held together by boards and nails. Martin Sirois’ lighting for the production was supportive and subtle and carried the mood of the piece smoothly and without ostentation – important for this piece of work.

What I loved about this play is that each character is so beautifully defined by the actors, all pulling together into that marvellous microcosm of the highly disturbed nuclear family. It is a truly wonderful ensemble piece of work.

It begs the question – “Will The Circle Ever Be Unbroken”?

August, An afternoon in the Country runs from October 2 to October 28. 514-288-3161 For more information: www.centaurtheatre.com