Whether you are a youngster, parent, teenager, or grandparent, it is hard to find a theatre company that is more trustworthy than Geordie Productions to let take hold of your imagination.

One of Canada’s largest theatre for young audience companies, Geordie Productions have presented live English theatre since 1980 and reach over 80,000 audience members through its Mainstage Series in Montreal as well as its annual School Tour and delivers more than 300 performances each season. The Mainstage series is an annual season of plays for family audiences performed at Centaur Theatre. The company proudly continues to open up new worlds for the young and young at heart offering exciting, insightful theatre that is sure to charm, educate and entertain. Their work inspires dialogue between children and parents as well as teachers and students. 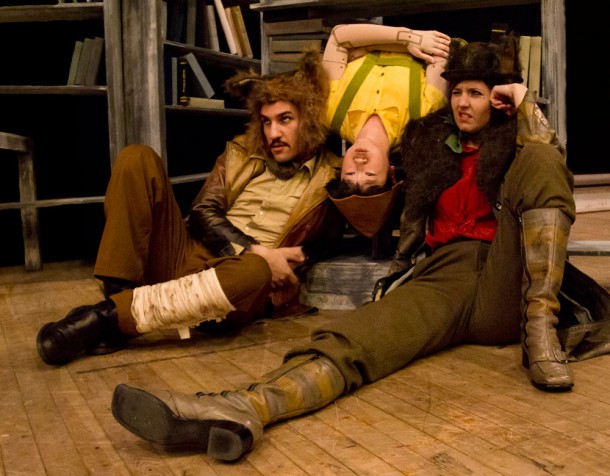 As they embark on their 32nd season, Geordie Productions’ Artistic Director Dean Patrick Fleming explains that “Geordie feels a great responsibility to our audience who hold us to a high standard…as do their parents and teachers, uncles, aunts and grandparents. This responsibility extends to our decisions when choosing the plays we’ll put into our season as we regularly look at the world and we question what we see. What’s going on that young people today might be asking questions about and what is affecting our lives? We then try to take all that we observe and present that in a way that will be informative, interesting and exciting. For example, this past year we saw and heard a lot about greed; about how 1% of our population has most of the money in the world and how there doesn’t seem to be a lot of sharing going on. We heard about corruption in the governments and how sometimes things just don’t seem fair. So armed with that information for our Mainstage season we are creating a new play from an old story set in the past and bringing an older play back that is set in the future.”

Opening Geordie’s Mainstage season in December, is the World Première of Paula Wing’s new adaptation of Robin Hood, directed by Mr. Fleming. This large scale production is a new-ish take on the classic story of an outlaw who breaks the law to be true to a higher authority: A former rich man who robs from the rich to give to the poor. Robin Hood and his band make their own rules, and live by their own code. In the wilds of Sherwood Forest the most important things are friendship and honour, justice, adventure and hanging out with your friends.

Staying with the theme of the need to share, Geordie presents David S. Craig and Robert Morgan’s great show Head à Tête in April 2013, directed by Alain Goulem. Set in a future world where people are left alone to fight for their survival, one day two strangers who speak different languages (one French – one English), meet and find shelter together beside a tree that has magically produced some fruit. They need to try and find a way to communicate and find a way to share. It’s a beautiful play with something for everyone. Two incredible performers, Joe DePaul and Michel Perron, and an amazing team of artists, will create this simple but important story. 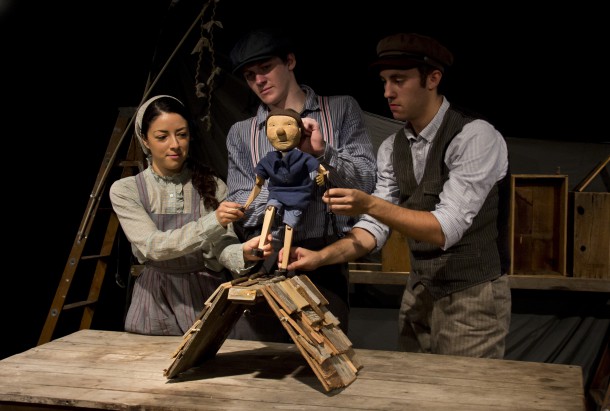 As well, Geordie’s School Tour makes its way across Quebec, Ontario and New Brunswick and Newfoundland, playing to over 60,000 people between September and March. Visiting schools, theatres, libraries and community centres Geordie will be in the Eastern Townships, the Lower North Shore, the Gaspé, the Magdalen Islands, the Abitibi, the Outaouais, and James Bay just to name a few!

This year, the tour brings two brand new plays on the road: Jabber (for high schools/cegeps) written by Marcus Youssef and directed by Amanda Kellock and Whispers in the Air (for elementary schools) by Attila Clemann, directed by internationally renowned puppet artist Clea Minaker. Jabber tells the story of a young Egyptian born girl who wears a hijab and has had to change schools because of issues at her last school, and Jorah, a young man with a troubled family past. In Jabber, it is appearances and judgments based on those appearances that are challenged.

Set in St. John’s Newfoundland in 1901, Whispers in the Air tells a heartwarming story about communication and finding your voice. Three performers, as much inventors as storytellers, work as a team of puppeteers, and mastermind a very detailed choreography while breathing life and imagination into the visual world that unfolds.