At just forty-two years old, Rafael Payare has already made significant contributions as Artistic Director and Conductor to several orchestras around the classical music world. He forged an immediate bond as a guest conductor with the OSM in 2018, and again in 2019. There was an immediate intuitive connection between Raphael and the musicians. Perhaps it was his appreciation of what it’s like to play an instrument, surrounded by fellow musicians. Perhaps it was his training by one of the world’s great conductors that gave him an unparalleled sensitivity to the composers’ musical intention. Whatever the combination, it’s clear that Rafael’s immense talent has played a significant role in his rapid rise in the classical music community.

Rafael was appointed to the OSM Artist-In-Residence program sponsored by the Rossy Foundation for the 2020 – 2021 season. His guest performances with the orchestra, combined with his on-site presence with the organization gave everyone involved a chance to become better acquainted. In January 2021, OSM management announced that Rafael Payare had accepted the role of Artistc Director and Conductor beginning with the 2022-2023 season.

I’ve had the opportunity to interview Rafael on two occasions, and he is an engaging and charismatic personality. He’s already established an impressive professional resume, but takes it all in stride.

“Music is not a cure for society –

but it can make you a better person”

“I’m the youngest of five children, and I started to learn and play the French horn when I was fourteen; which is late for a classical musician. My brother was playing the bassoon. My parents were very supportive.” 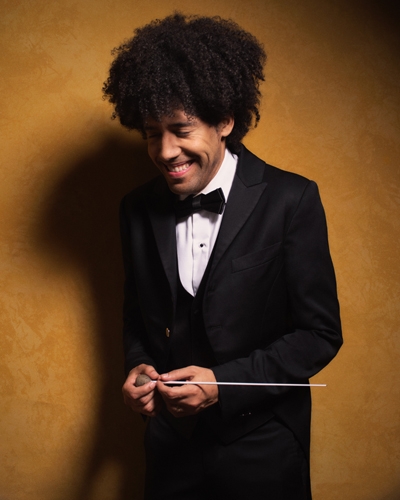 This photo captures the whimsical side of
Rafael Payare
Photo: Mathieu Fortin, and tuxedo by TUX Creative House

Rafael studied French Horn in Venezuela’s famous El Sistema music program, which enables people from different economic backgrounds to develop their musical talents. Rafael excelled and soon earned a position as Principal French Horn with the Simon Bolivar Youth Orchestra. He subsequently performed as the Principal Horn for the famous Simon Bolivar Orchestra, taking part in many tours and recordings with conductors that included Giuseppe Sinopoli, Claudio Abbado, Sir Simon Rattle and Lorin Maazel. Rafael had established himself as a talented musician and section leader – but there was more to come.

Rafael’s musical talent caught the attention of the Youth Orchestra’s founder, José Antonio Abreu, who began to teach Rafael to conduct an orchestra in 2004. Rafael conducted with orchestras throughout his native Venezuela and with his ‘home’ orchestra, the Simon Bolivar Orchestra. Abreu’s recognition of Rafael’s potential was confirmed when Rafael won First Prize in Denmark’s prestigious 2014 Malko International Competition for Young Conductors. As the saying goes – the rest is history.

In 2014, Rafael was appointed Music Director and Conductor of the Ulster Orchestra, a position he held until 2019. In a show of gratitude for Raphael’s contribution to the orchestra, he now holds the title of Conductor Laureate in recognition of the vast artistic contribution he gave to the orchestra and the City of Belfast during his five year tenure.

The 2015 – 2016 season saw many more guest conducting assignments for the charismatic and youthful Rafael Payare. He made his first appearance with the Mahler Chamber Orchestra at the Cologne Philharmonie and was back in London to conduct the Philharmonia Orchestra at the Scotiabank Centre. Rafael conducted the Czech Philharmonic Orchestra and the Sinfonirorchester de Bayerischen Rundfunk in Munich. All the while, he was holding down his ‘day job’ at the Ulster Orchestra, where he would conduct until 2019. 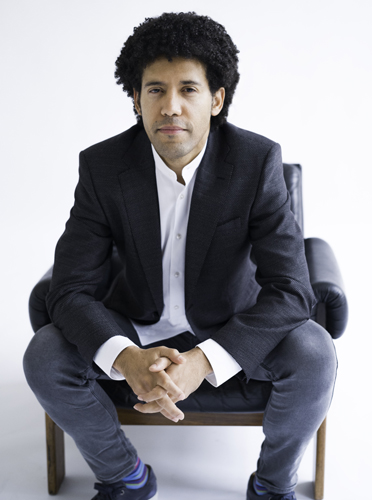 Rafael is looking forward to
his first summer in Montreal
Photo: Gerard Collet

Rafael started his debut as an opera conductor in 2019 at the Glyndebourne Festival for a performance of Barbiere. He’s also conducted Madame Butterfly La Boheme for the Royal Swedish Opera and La Traviata for the Malmo Opera. In the 21-22 season, Rafael conducted La Tosca with the Danish Opera Company. “When working with a soloist, I have to know what the artist wants to say, and have the orchestra ready to support them.”

In 2019, Rafael began as Music Director and Conductor with the San Diego Symphony Orchestra. His tenure there included the opening performance at the Rady Shell, an open-air concert venue in Jacob’s Park.

“Music is the centre of my life.” This is the statement which opened my second conversation with Raphael, and it’s an accurate summation of his relationship with music and how he earns his living.

The idea of becoming a conductor came to Rafael when he was playing French horn for the Simon Bolivar Youth Orchestra when Italian conductor Giuseppe Sinopoli visited for a guest performance. “I was fascinated by how he was able to get what he wanted from us without being able to speak a word of Spanish! He was completely in tune with us as musicians and the composer’s intention for his music.” Rafael’s conducting style has a similar combination of precision and fluidity.

The music just flows from him.”

Rafael cites the late Argentinian conductor Carlos Kleiber as a role model, with good reason. Like Kleiber, Rafael’s conducting technique is fluid and precise. That seems like a contradiction in terms, but Rafael explains the while the timing of a conductors message to the musicians must come at the precise moment in the composer’s score, his body language has to be fluid, so as to retain the rhythm of the composition.

Rafael is familiar with the OSM as a whole and the musicians individually. From his first appearance as a guest conductor, he describes that there was ‘a click’ between himself and the orchestra. “I could feel that we were re-discovering the composer’s music that we were rehearsing… that we were making this discovery together.”

Speaking about his new colleagues; both musical and professional, Rafael enthuses; “The OSM is a wonderful organization. As an orchestra – it’s phenomenal!”

Rafael and his musician wife Alisa Wellerstein have two children and lead the somewhat nomadic life of classical musicians. Alisa is a solo cellist, and the couple often try to schedule performances together. “I admire Alisa as an artist. We are soul mates in music.”

Raphael is looking forward to his first summer in Montreal and to leading the OSM in a series of outdoor summer concerts that include the Olympic Stadium Esplanade, Festival Lanaudière, a quick tour of South Korea, and the indoor Classical Spree of 24 concerts at that run from August 10 – 24; with ticket prices starting as low as $10. For more information about the OSM summer schedule and upcoming 2022-2023 Season, please visit: www.osm.ca or www.placedesarts.com 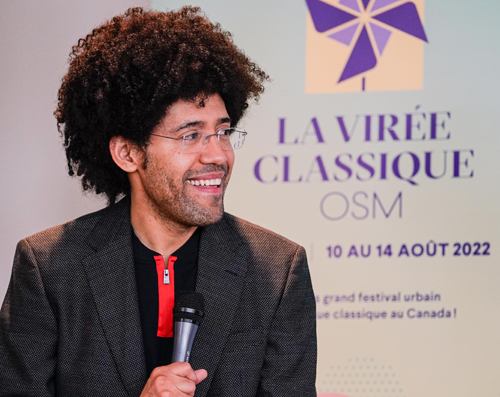 The OSM will be performing in several city parks

Takin’ it to the streets

Sponsored by Sirius XM, the OSM will again set up its tent in the parks of Greater Montreal for classical evenings open to everyone. Under the direction of Dina Gilbert and Adam Johnson, these concerts under the stars are free of charge and part of the OSM’s mission of accessibility. Music lovers will be able to enjoy unifying and inspiring repertoire by coming out on July 26 to Parc Poly-Aréna in Brossard and on August 19 to Parc Angrignon in Montreal (Le Sud-West borough).

In August, OSM musicians go out and meet their public in various neighbourhoods and parks for chamber music concerts right in the city. Sixteen concerts will be presented from August 24 to September 3. Details will soon be available on osm.ca.

Summer at the OSM at a glance

August 24 to September 3: SUMMER IN THE CITY WITH THE OSM