The World Premiere of SuperDogs: The Musical!

The Segal Centre is thrilled to announce a brand-new spectacle for the whole family this holiday season, Spot On Entertainment™’s SuperDogs: The Musical featuring the President’s Choice® SuperDogs™. This all-original, interactive experience—part musical, part stunt-dog agility show—by Leonard Chase and John Halpin, and directed by Sara Rodriguez, will be in the Sylvan Adams Theatre from November 28 to December 19, 2021. 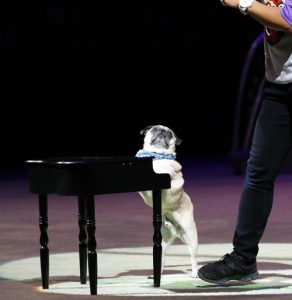 What makes this production so special? It stars 24 of the world’s most talented canines that will wow audiences with their tricks and stunts. The story follows the close and beautiful bond between a young girl named Chloe played by Zoë Brown (who dazzled in the Segal Centre’s The Hockey Sweater: A Musical) and her talented dog Bear, who dreams of becoming part of the SuperDogs™ show. On their journey, they’ll will meet four skilled musical theatre performers all making their Segal Centre stage debuts: Dora Award nominee Stewart Adam Mckensy (seen in Mirvish’s The Wizard of Oz  and Kinky Boots), Dakota Jamal Wellman (META winner for Outstanding Supporting Performance in Black Theatre Workshop’s Simone Half and Half), Amber Jonas (starred as Tracy Turnblad in the Côte St-Luc Dramatic Society’s production of Hairspray), and longtime Montreal theatre creator Trevor Barrette (creator of the Captain Aurora musicals and Assistant Director on the Segal’s The Angel and the Sparrow, now known as Piaf/Dietrich). Six SuperDogs™ Trainers, whose furry companions play an important part in the story, and a live band on stage will be along for the ride. At the heart of it all is a reminder to always chase your dreams and that anything is possible with your best friend by your side.

“Are we bone-afied bonkers for developing a new musical starring over 20 dogs? Yes! Will it be a romping good time and leave you with feelings of pure joy? Also, yes! This is a season of being bold, of trying new things, and uplifting our community. What better way to do that than with dogs and musical theatre?” said Artistic and Executive Director Lisa Rubin.

“Dogs took on new importance during the pandemic as companions and even therapists,” Director Sara Rodriguez said. “Underneath the fun, this is a show about relationships, unconditional love and communication, timeless themes that really resonate during the holidays.”

Who Are the SuperDogs™?

The SuperDogs™ have been entertaining audiences all over the world for over 40 years—that’s longer than the Broadway show Cats! They’ve been the subject of television specials (ESPN’s SuperDogs! SuperJocks!), the inspiration for feature films (Daniel and the Superdogs), the stars of viral videos that have generated millions of views online, and they’ve appeared on hundreds of television shows. You might even have seen this production’s and Quebec’s own Alexandra Côté with her dogs, Tesla and Louka, on America’s Got Talent this summer! Started in Montreal and constantly appearing across North America, the SuperDogs™ draws from a talent pool of about 100 experienced trainers in different parts of the country who bring their family dogs and become cast members for these remarkable productions. To date, over 30 million fans of all ages have experienced their fast-paced, interactive, heart-warming, and hilarious shows.

“We love our dogs unconditionally. We share our inner most secrets with them. We communicate with them constantly. We play with them. We mourn their passing profoundly,” said Writer and SuperDogs C.O.O. Leonard Chase. “It is pure wonderment sharing our lives and homes with these magnificent beings.” Chase hopes this new musical imprints this respect and love for our furry companions, and shows audiences just what dogs are capable of.

VIRTUAL SUNDAY @ THE SEGAL
An enriching, online, pre-show lecture on the ideas and themes of the play streamed live on the Segal’s Facebook and YouTube pages.
Sunday, November 28 – 11:00 a.m.