With Kerson Leong and Stéphane Tétreault, Brahms’s Double Concerto for Violin, Cello and Orchestra presents a Romantic vision of the concerto grosso. With its powerful melodies and intricately woven construction, the piece charms and stuns, time and again.

Under the baton of German conductor Erina Yashima, Dvořák’s luminously orchestrated Symphony No. 5 reveals the mature side of the composer, better known for his New World Symphony. With the first movement’s captivating melodies and the last movement’s poignant drama, it has an impact on everyone who hears it. Though she is only in her early forties, American composer and violinist Jessie Montgomery is at the peak of her craft. Her piece Strum, inspired by popular American folk melodies, leads the listener from nostalgia to pure delight. 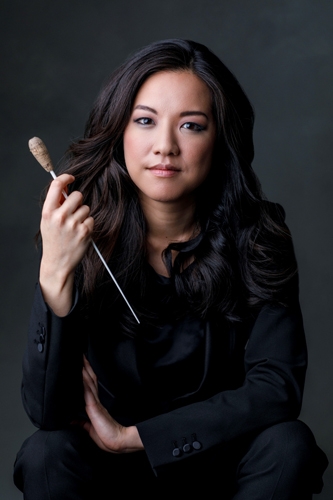 As a rising star in the industry, Yashima has performed all over the world with acclaimed ensembles and orchestras. Recent highlights include her debut at the Arena di Verona and her return to the Chicago Symphony Orchestra, as well as debuts with the San Francisco Symphony, Aspen Chamber Symphony, Rostov State Philharmonic, and at the Colorado Music Festival.

This 2021-22 season and beyond will see Yashima’s debuts with the Seoul Philharmonic Orchestra, NDR Radiophilharmonie Hannover, Orchestra della Toscana, Orchestre Métropolitain de Montréal, Albany Symphony, Eugene Symphony, Royal Scottish National Orchestra, and Niederrheinische Sinfoniker, among others. On the opera platform, Yashima will conduct a new production of Mozart’s Così fan tutte in her debut with the Washington National Opera at the Kennedy Center, and lead a production of Rusalka at the Theater Krefeld und Mönchengladbach.

To purchase your tickets to the live performance or the webcast, visit: www.orchestremetropolitain.com