It’s going to be the biggest day of the festival, with more than half a dozen comedy shows ready to stream.

Dive into the minds of some of the world’s funniest people with Kevin Hart in his show, Comedy Gold Minds. From rising stars to comedy legends, Kevin pairs with comedic tastemakers for “ear-opening” dialogue that takes listeners on a wild and crazy ride through some of the world’s top comedic minds. From chronicling their comedy club experiences to a sneak peek of their latest material, each episode is packed with punchlines, anecdotes, and inside jokes. Joining Kevin Hart is Neal Brennan. Previous guests include Jerry Seinfeld, Eddie Murphy, Tiffany Haddish, Sarah Silverman, Steve Harvey, Amy Schumer, Nick Kroll, Hasan Minhaj, and more. This show will air online for free at hahaha.com.

Just For Laughs Live in NY 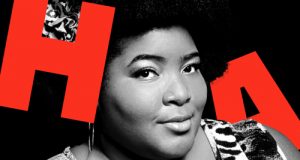 Just For Laughs is live in New York with host Dulcé Sloan, stand-up comedian, actress, writer and correspondent for The Daily Show with Trevor Noah on Comedy Central. Dulcé hits the Just For Laughs stage joined by an amazing lineup of JFL alums, including Todd Barry, Michael Kosta, Marina Franklin, Josh Johnson, Emma Willmann and Jessica Kirson! This show will be performed in front of a live audience in N.Y. and then aired for free online at hahaha.com.

The Nasty Show is back and will hands-down be the filthiest, most shocking and taboo show of the festival. This iconic JFL brand pushes the boundaries and encourages audiences to check their political correctness at the door… let go and laugh! Prepare yourself for a special edition of one of the festival’s longest-running shows, shot live from New York! Hosted by Big Jay Oakerson, dubbed “Master of the Dirty Joke” by the New York Times and co-host of The Bonfire with Big Jay Oakerson and Dan Soder on SiriusXM, this year’s The Nasty Show will also feature Donnell Rawlings, Rosebud Baker, Robert Kelly, Yamaneika Saunders, Paris Sashay, and Ari Shaffir! This show will be performed in front of a live audience in N.Y. and then aired for free online at hahaha.com.

Date Night with Chris & Vanessa invites couples (and sometimes single folks) on a fun date to unpack issues everyone faces in relationships and family life. A cross between Red Table Talk and Comedians in Cars Getting Coffee (but with far less PG topics), Date Night combines comedy and expert insight to dive deep into the complexities of relationships, as well as newsworthy issues, thought provoking ideas, and comedy with a purpose. Hosted by comedy writer, producer, actor and performer Chris Spencer and casting director, Vanessa Spencer. This show will air online for free at hahaha.com. 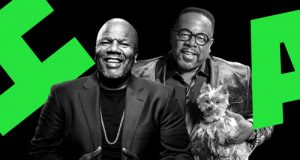 Quake’s House features legendary stand-up comedian, Earthquake, at his most authentic with recurring segments, celebrity guests, and some of the funniest emerging comics around. From hilarious “Mancave” revelations to his on-air Fantasy Football updates and “All Women Wednesdays,” Quake’s signature humor is always on full display. Joining Earthquake is Cedric The Entertainer. This show will air online for free at hahaha.com.

The Ladies Room with Jazzy

Throughout each episode, online sensation Jasmin “Jazzy” Brown and four of her favorite (and most hilarious) girlfriends — Natalie Friedman, Briana Lawrence, Renita Woodland, and Kiya Roberts — gather to spill tea, kiki, and disagree about every issue under the sun from a fully female perspective where no topic is off-limits and nothing is censored. These are the conversations that women have been dying to share (and men can finally eavesdrop on). Each coming from different walks of life, these five funny women are having the ultimate meeting in The Ladies Room, and you don’t want to miss it! Joining them on this episode is London Hughes. This show will air online for free at hahaha.com.

Just For Laughs Eat My Shorts

Just For Laughs’ annual short film competition, Eat My Shorts, is back! From horror to time travel comedies, crime to psychological therapy, learning a lesson in theft to living through Covid times, and everything in between! The top comedic short films from around the world will be featured online at the 39th edition of the Just For Laughs festival, and three winners will be selected at the end of the screening for the top three prizes.

This year’s finalists include: