Vittorio Rossi is arguably one of Canada’s foremost playwrights; and the productions of his work have produced major box office successes for the theatres that stage his plays, most notably Centaur Theatre. He is also an in-demand actor for films and television, which gives him a unique perspective on the creative process of writing plays. 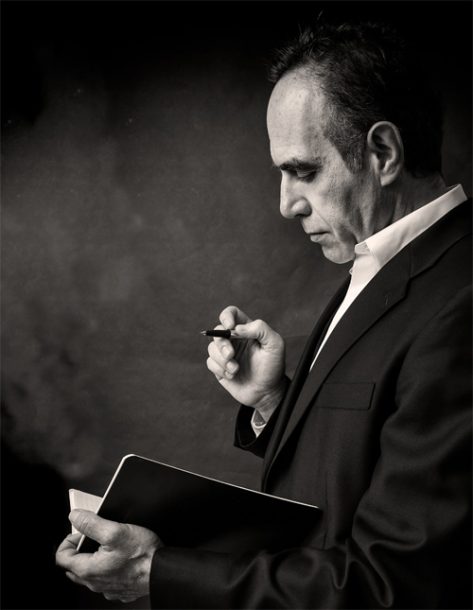 Vittorio Rossi brings experience as an actor on stage, television, film and as a playwright to his role as Artistic Director at MagJusJen Entertainment

Vittorio draws on his Italian heritage and his own father’s experience during WW II (Hellfire Pass) and as first generation immigrants to Canada in A Carpenter’s Trilogy and perhaps most importantly, Paradise By The River – the story about the internment of Italian-Canadian citizens after the outbreak of WW II. Supplementing Prime Minister Justin Trudeau’s recent apology to Canadians of Italian descent, Justice Minister David Lametti commented specifically about the important contribution that Paradise By The River made to inform Canadians about the unjust internment.

After a chance meeting with Barry Lorenzetti, a boyhood friend from Ville Emard, Vittorio and Barry came to an agreement that would see Barry become the Executive Producer for the remount of at least three of Vittorio’s plays by Barry’s entertainment company, MagJusJen Entertainment. The Chain was the first, and it was presented at McGill’s Moyse Hall in September of 2019. There were plans to continue the project by staging more of Vittorio’s work – but the world effectively came to a standstill in March 2020 with the worldwide COVID-19 pandemic.

But first, let’s back up a bit to describe that chance encounter that rekindled that boyhood friendship and the subsequent remounting of Vittorio’s outstanding plays.

“In the summer of 2018, I had gone out to dinner with a couple of friends; Peter Poletti was a retired Montreal Police Detective and Richard Zeppieri, an actor friend who was visiting Montreal from Toronto. We’re all from the same neighbourhood in Ville Emard. After dinner we went to Ziggy’s Pub on Bishop. As we were being seated, Richard noticed that Barry Lorenzetti, also from the neighbourhood, was there with his wife. Richard and Peter wanted to go and say ‘hello’ and I said that we should leave them alone… well we didn’t, and Barry was happy to join us. Richard and Peter were telling Barry all about my plays about Italian-Canadians.”

“The stories depicted by Vittorio about our beloved Italian community deserve to be told, and our many contributions to Canada deserve to be recognized” – David Lametti, Minister of Justice

“Barry asked me to step outside for a more private conversation, and I told him more about my work, including Paradise By The River, which was actually sponsored at the Centaur Theatre by a group of Italian businessmen.  Barry said, ‘I’m in to produce three plays, but one has to be Paradise By The River.’ We went back into the bar and Barry called Ziggy over and said, ‘Peter and Ziggy, I want you to witness this handshake on the deal I’ve made with Vittorio – I’m going to produce three of his plays.’ To this day, that handshake is my contract with Barry Lorenzetti. I’m the Artistic Director of MagJusJen Entertainment, but my contract with Barry is that handshake. That’s the kind of man he is – that we are.” 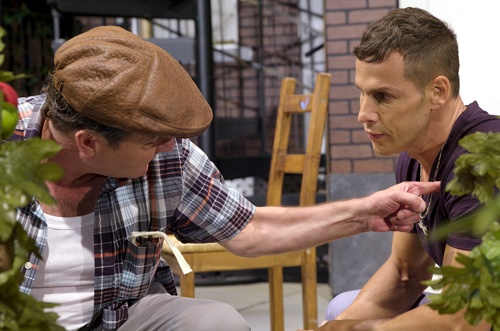 “The stories depicted by Vittorio about our beloved Italian community deserve to be told, and our many contributions to Canada deserve to be recognized” David Lametti, Minister of Justice

Now, back to 2020 and the worldwide pandemic that put a stop to most social interactions and all live theatre performances. The fledgling production company couldn’t mount a play. Barry challenged Vittorio to come up with a possible way forward, and suggested they consider filming The Chain. Vittorio thought about films like Twelve Angry Men, shot primarily on one room, and how his play could be adapted to film. Vittorio continues; “I came back to Barry and suggested that we rent a theatre, put up our set, and film the play without an audience. I said; ‘Let’s try to bridge these two art forms – theatre and cinema’.”

Producer Susan Fuda was brought in to reprise her role when The Chain was remounted at Moyse Hall. “I’ve known Vittorio for twenty years, and I’ve seen the evolution of his plays. He’s meticulous in his writing. His first drafts are almost like final scripts.”

Susan continues; “When we produced Paradise By The River, Vittorio’s play about the internment of Italian Canadians during WW II, many people who came to see the play were asking; ‘How come nobody’s talking about this?’ Well, Vittorio talked about it with his play. David Lametti bought tickets to that play’ and years later we finally have an apology from the Government of Canada for the treatment of so many men of Italian descent.”

As part of the apology, The Honourable David Lametti, Minister of Justice and Attorney General of Canada wrote to Vittorio; “I am proud to support the plays and movies written and directed by Vittorio Rossi, particularly his play Paradise by the River, which tells the story of the internment of Italians in Canada.” Dated May 27, 2021

As producer, Susan Fuda has a goal of expanding the audience for The Chain and Vittorio’s other works that are in line for production by MagJusJen Entertainment. “Vittorio’s stories are about families, and they transcend cultures.”

Filming during a pandemic was to say the least – a challenge.  Public health protocols had to be carefully followed. Scenes and camera angles were pre-planned to minimize time on the set. Vittorio informs me, “When you shoot a Hollywood movie, the scenes can be as short as 30 seconds, and not much longer than a minute. Our scenes were three, four and maybe even up to five minutes long. That’s a long time for an actor to focus – but we do it all the time in live theatre. That method of filming gave us a way to capture the emotions of the actors and the drama.”

Just days before filming was to start, the original lead actor Harry Standjofsky became ill and would not be able to play the pivotal role at the family patriarch Tulio Testa. Vittorio called his actor friend Richard Zeppieri in Toronto and said simply; “Richard, we need you.” This is the same Richard that witnessed the binding handshake at Ziggy’s Pub in the summer of 2018. Zeppieri would now reprise the role he played thirty years prior in the original production of The Chain.

Brought on by a unique set of circumstances, the film/play is proving to be a big success. It has been accepted by the prestigious Stratford Festival virtual platform called [email protected] The Chain will be screened at GUZZO SPHERETECH 14 in Ville St-Laurent and MEGA-PLEX Lacordiare 16 in St. Leonard.

For more information about The Chain, please visit: www.magjusjenentertainment.ca